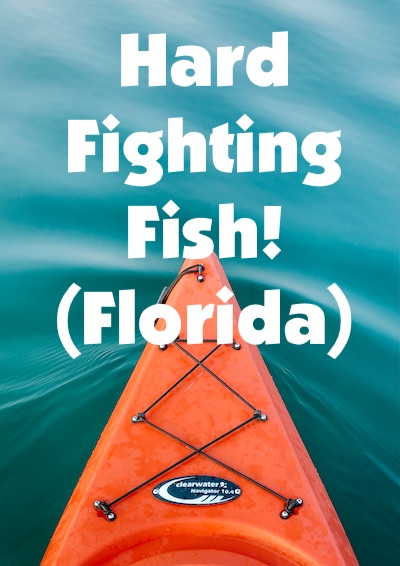 Everyone knows the hardest fighting fish in Florida are marlins and other sailfish. This isn’t about that. I wanted to write about hard-fighting inshore fish because that’s what most people are doing. Most people don’t have a boat of their own to zip out to the depths and catch marlin or huge tuna.

Most of us are throwing a line in from shore, a pier, or at best from a kayak. When you hook into a big fish on your kayak, you’re in for an adventure because you see the power of the beast.

There’s also no way to leverage it much. You can’t lean your rod against a pier railing in a kayak! You’re limited to how hard to set your drag so the fish doesn’t flip your kayak!

This makes it extra fun to catch a hard fighting fish in a kayak. I love kayak fishing more than I love my kids. You will too. Especially if they’re older than 12.

Get a kayak and forget all about them. Get out on the water and catch some monsters!

In no particular order…

When I hooked my first big Jack on my yak, I remember it towing me all over Tampa Bay for almost an hour. I remember the helpless feeling I had because I was SURE it was a shark and I wasn’t sure I wanted to reel a shark of any size up next to my kayak.

I remember thinking I should bring it close – maybe 2 yards away – and cut the line and wish him the best. I was totally shocked when I pulled up this bright white/silver/yellow jack crevalle!

I had only caught jacks that were 5 lb. or so before that and this jack was like 35 lb. of pure fighting monster.

This fish had so much energy I was surprised that it wasn’t even THAT BIG. The fighting power of jacks is legendary. Such a strong fish!

2 – Sharks. The Heaviest Inshore Fish to Catch on a Kayak!

Everyone catches sharks on a kayak and it’s about the worst thing to catch. I never target them from a kayak but inevitably I end up with one on the end of my line.

Sharks fight a long time. A big shark? You’re just not going to land it on a kayak unless your resolve is much harder than the shark’s.

They have so much muscle and weight that it’s dang difficult to reel in a couple hundred pound hammerhead shark on 100 lb. test braided line – or any line.

There’s just no leverage on a kayak which makes it that much more exciting and frustrating to catch a shark.

Hammerhead and black tip Sharks have pulled me around the west coast on my Perception Illusion kayak more times than I can count. I don’t think I ever went over an hour fighting one, but that was plenty.

Usually the line breaks when the shark gets close to the kayak and realizes the situation and does a quick burst downward, snapping the line easily.

Goliath Grouper are ridiculously heavy and difficult to move from a pier. From a kayak, I’ve never even considered it because how are you going to bring it up? You can’t. OK, wait, I have to go find a video of someone bringing up a giant Goliath Grouper on a kayak. I’m sure someone has done it!

Grouper don’t even need to be that heavy and they can dive and go around a corner, a pier pylon, in a hole in some rocks, anywhere and you have to wait it out – hoping it doesn’t take too long.

My first introduction to fishing grouper was on one of those 50 people on a boat type deals. As soon as I felt a pull, some guy with cut up fingers and smelling like chum block was grabbing my rod pulling it up and telling me ‘REEL IN REEL IN!’

I think he probably got a cut of the grouper caught each day and he wanted to make sure the noob didn’t take anything away from his paycheck.

When I did pull the grouper up I couldn’t believe how small it was. That little thing fought that hard? It’s kind of a mystery of fishing how they do it. I still don’t understand.

4 – Stingrays. The Most Annoying and Hard Fighting ‘fish’ in Florida!

I hate to even talk about them any more, but when they’re big these things can really pull and make life miserable. You’ll know what it is because you can feel the slow undulating wings pulling against you.

Sometimes they’re using the current like a sea-sock or sea-anchor type thing and the pull on your line increases a lot – sometimes snapping them off.

I told you a story about my friend Dave and his first time fishing from a kayak and landing what is probably to this day the biggest one of these suckers I’ve ever seen anywhere. But before you read that, read the story about when I stepped on a stingray barb at Clearwater Beach. Excruciating!

When fish get over 100 lbs. AND they’re torpedo shaped… they’re fast and great fighters. Tarpon are very strong fish that can jump over your kayak and even knock you off a pier or boat into the water when they jump into you.

No kidding. They sometimes terrorize anglers on boats.

To be honest, I’ve never caught a tarpon from my kayak. I just never tried. I’ve yet to flip my kayak and all my stuff into the water and I don’t ever want that experience.

6 – Permit. Most Fun and Toughest Fish to Catch Inshore!

One of the most fun fish to catch, and a heck of a fighter on a hook, the permit can grow to 60 lb. and are like jacks on steroids. They have powerful muscle and a flat body and huge tail that helps propel them through the water very quickly.

They know how to cut through your leader if you’re not fishing wire. If you are fishing wire, they are super wary on the flats when feeding and they probably won’t bite what you’re offering.

These are wiley fish that are great fun to stalk and catch on live bait or artificials. They are a worthy adversary for sure, and one of the most prized catches in Florida.