How to Choose a Saltwater Fishing Reel? 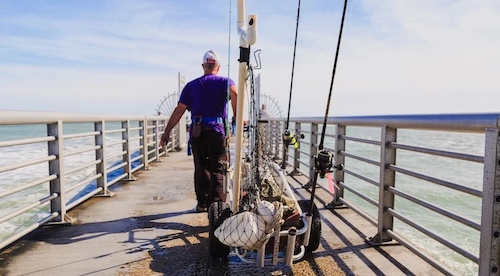 Selecting the right fishing reel is not all that difficult. There are basically 4 reel types you can choose from.

Your reel and rod are a team. If you have the wrong reel on a rod, you may not even be able to cast!

Learn more about how to tell what is what, below.

Most anglers use spinning reels because they’re simple and efficient and don’t take any real skill to learn. You can learn how to cast and use a spinning reel in a few minutes. No big learning curve here!

Spinning reels have an open reel face that is surrounded by a strong metal wire-like guide that flips up and down to grab your line and let it go.

When the bail is up, you can cast. When it is down, you can turn the handle to reel in your line.

Spinning reels have drag you can tighten or loosen to take some of the work out of fishing and to make the reel more efficient in catching fish.

The drag works by putting some tension on the reel so it cannot spin freely when a fish grabs your bait or lure. If the fish was able to run freely right after grabbing its meal, it may run straight down into a hole or behind coral or other sharp structure.

So your spinning reel is set with a tension or drag on the reel that is considerably less than the strength of your line. For instance, if your line is 30 lb. test braided, you might set the drag around 10 lb. of pull.

How do you figure out what 10 lbs. of pull is? You guess. Set the drag and pull on it to see if you think that is 10 lbs. Simple! 😛 Do be careful that your rod is set in a holder that can handle 10 lbs. of drag or your entire rig may launch off the boat and straight to the bottom of the bay with a good strike.

A spinning rod needs to have the guides (the circles that guide the fishing line along the pole) on the bottom of the rod because that’s where the reel sits. The rod flings the bait/lure out on the line from the position of the reel on the bottom near the ground.

The guides on spinning rods are large at the bottom of the rod near the reel and get obviously smaller closer to the tip.

When casting accuracy is paramount, I go straight for my Penn or Abu Garcia baitcasting reels. These reels sit perpendicular to the orientation spinning reels sit on the rod. The spool spins as line is taken off.

Baitcasting rods have smaller guides – much smaller. The reason is because the line unspools straight off the reel and can go straight into a small guide. With a spinning reel, it isn’t possible, larger guides at the bottom are needed.

Baitcasting rods are cast overhead by clicking the button with your thumb and then holding the spool tightly until casting, then just feathering the touch of your thumb off the spool to control where the bait/lure lands.

Trolling reels are like bigger and stronger baitcasting reels. Trolling is of course when you let bait or a lure behind your boat as you’re moving. The drag is set to scream loudly when something takes your lure/bait and the rod and reel are strong enough to handle even sailfish and other very large fish.

Many people like fly fishing because the skill is in using your floating line to present your bait or lure to a fish in the most natural way possible.

Well, you could drop a line in with your hands and that would be even more minimalistic, but for some reason, fly-fishing has caught on and many people love it.

Which Reel and Rod Should You Buy?

If you’re a new angler and you are not sure which fish you’ll be specializing in, just go buy a strong spinning reel and rod because you can use it to catch all kinds of fish.

The learning curve is small, and you’ll be catching fish with it in no time. You can fish off a pier, a boat, the shore, wade-fishing, or any sort of fishing you want except trolling for big marlin or kingfish!