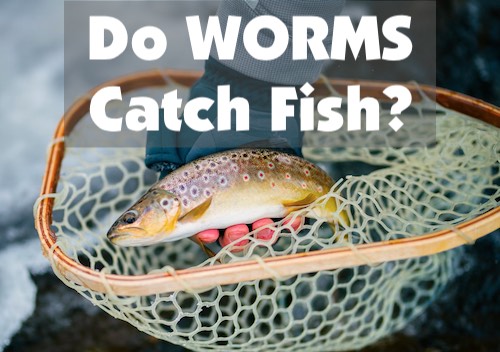 Yes, worms are a very good bait choice for trout, for bass, and for catfish. The presentation matters a lot and is key to catching more fish. There’s a lot more to be said about it and we’ll cover it all below!

Which Worms Can Catch Fish?

Red worms of various sizes, mealworms like the kind people feed to lizards, geckos, and birds, and thick nightcrawlers that resemble small snakes can all be used to catch freshwater fish when placed on a hook.

Even plastic worms are used with great success for bass fishing. I caught my first bass with a 7″ Pumpkin Head color lure in a lake in McIntosh, Florida. Sometimes plastic worms work better than live bait!

Where to Find Fishing Worms?

Bait shops all over the United States and many other countries sell worms by the dozen in a small container for a few dollars.

I was usually too rushed for time and bought 3-dozen worms before I went fishing in lakes, streams, and rivers for largemouth bass and crappie around my home in Temple Terrace, Florida.

If you have a yard, or know a bit of public land where you could dig a few shallow holes with a shovel, you can find worms of all sizes living just beneath the dirt – especially if there’s grass there.

Please be responsible and don’t dig up a park or someone’s yard just to find some big nightcrawlers for fishing!

A great way to find worms is during or just after a rain shower. Worms will suffocate in their holes when they fill up with water so they climb out and you can easily spot them with a flashlight at night.

Trout are considerably smaller (usually) than bass or catfish, so the way you’ll catch them is a bit different from just throwing on the biggest squiggly worm you can find and crossing your fingers.

Trout are very picky eaters they don’t just eat anything in front of them. The smell, the size, the placement, and a well-hidden hook in a small earthworm will help you catch trout with worms while fishing.

Don’t use big worms, only fish for trout with very thin worms not longer than 2 inches.

Which Worm Should You Use for Trout in Freshwater Lakes and Streams?

The smaller the worm the better works for catching trout. That’s because a trout fish’s mouth is very small compared to most other fish except something like blue gill or crappie.

So a small diameter worm that isn’t too long – two inches maximum length – is the right size to fish with. If you don’t have small worms that size you can cut a larger worm into a smaller piece.

Mealworms can be an excellent trout bait! These small light-brown colored worms are the ideal bite-sized bait for trout. Some anglers put a piece of marshmallow on the hook above the mealworm so it floats the worm off the bottom of the lake or stream.

You’ll have a sinker 1-2 feet above the hook which you’ll need to adjust to match the height where the trout are schooling.

Also consider using live mealworms or a mealworm lure on a fly-rod setup for trout on lakes, rivers, and small streams.

Which is Better to Fish for Trout – Worms or Salmon Eggs?

It really depends on a couple of things. First of all, the water temperature really slows down worms and can make them look dead and lifeless in the water.

That isn’t ringing a trout’s dinner bell so well, is it? You might as well be fishing with salmon eggs at that point!

If the water is cold, especially if there’s snow on the ground, trout don’t ever see worms in the water. That only happens during warmer weather, right?

So, during cold weather switch to small salmon eggs of a bright color to catch more freshwater trout.

Can I Catch Saltwater Trout (Speckled Trout) with Worms?

No, worms have a horrible reaction to saltwater. Did you ever sprinkle salt on a slug? Same idea. The salt crosses the worm’s membrane and kills it. Don’t use worms that live in the ground in saltwater, please!

A big thick live nightcrawler worm as big as you can find or pay for is the right way to fish for bass in Florida lakes and just about any lake around the country.

Bass can eat other fish and eels and snakes they find in the water, so a huge worm as big as you’ve ever seen is probably the perfect size to go bass fishing with.

Even better (and cheaper) is just picking up some plastic worms to fish for bass with.

You can use the Texas Rig style to rig a hook through the worm to keep it in a natural straight position and a small bullet-head sinker on the front just before the hook to give it ideal weight for casting and motion through the water.

If it was me, I’d just go for the plastic worms. They’re cheaper, cleaner, and you can re-use them over and over!

It has been said that catfish eat anything dead. But, they also eat living things if they can catch them easily. A worm laying on the bottom with a hook and maybe a sinker can be an ideal presentation for a big catfish in a lake or river.

Big worms like night crawlers are ideal for big catfish. I’ve caught 10-15 lb. catfish on large worms in lakes around our home.

Note – plastic worms are not a good bait for catfish as they need to be moving around to work and catfish don’t usually chase prey down to eat, they want it laying on the lake bottom in front of their faces.

They also want to smell it, so dead stuff works well and also the bait juice you can buy to make your bait smell more ‘natural’ (worse!).

Worms are a great bait for trout, bass, catfish, crappie, bowfin, and many other freshwater fish. It’s key to match the size with the preference of the fish along with the area of presentation (bottom, middle water column, topwater).

Remember, worms are air-breathing. They will soon drown if you don’t let them up for air every few minutes.

If your worms die, your chances of catching a catfish or of having a crab pick apart your worm increases dramatically.