Fishing with Bread? (How To Make It Work!) 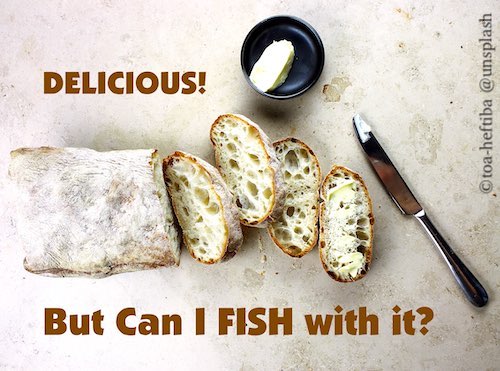 You can catch fish with bread, the problem is keeping it on the hook. I’m not sure why anyone would want to use bread for fishing because it’s far more productive to buy a block of frozen squid or shrimp. You’ll catch far better variety of fish.

Anyway, if you insist, here is how to catch fish like bluegill, crappie, bream, catfish, and sometimes trout with bread on your hook!

Why Use Bread as Bait to Fish?

How To Prepare Bread as Bait?

Bread is delicate stuff especially in water, as you know. You’ll need to do a couple of things to prepare the bread you’re using as fishing bait so have a look at the methods below and choose one or a couple to get started.

A bread punch is a tool that compresses bread and cuts it into a circle as bait for your hook.

This is good for preparing your bread, but come on, nobody needs to run out and buy bread punches to do this! What a waste of time and money. You have everything you need at home to start NOW. Here’s how.

How to Punch Bread without a Bread Punch

Are Some Breads Better than Others for Fishing?

The whiter the bread, the better. You know how if you drop a white Sabiki rig (for catching bait) into the freshwater or saltwater in Florida, you’ll get bites immediately? Same thing.

Why does white work better?

The color white means it is the muscle of the fish or shrimp and it is likely cleaner and better for eating than the intestines, for instance. Sure they eat them too but believe me when I say white attracts fish quickly.

I don’t know, it had to rhyme, but I’m no poet. Thicker bread will last longer in the water. You know the fluffy white Italian bread you get at the bakery? It’s delicious, right? Don’t use that. It’s not thick enough.

Ideally, you’ll find some thick sourdough bread that is about 4 times thicker than regular white bread. When you compress this bread, it is much stronger on a hook and can last for much longer as you fish.

The Best Bread to Use? Make Your Own.

For the best possible bread to use for fishing, you’ll need to make your own. This is ideal because not only can you use baked bread, but you can make the dough and use that as well.

When you make your own bread, use more flour than the recipe. Use less yeast, or no yeast at all. Yeast makes air bubbles and pockets in the bread and that makes it weaker when you compress it.

Make a thick dough that is really sticky. This is will ensure the bread stays on your hook longer.

11 Tips to Make Bread Stay On the Hook!

Which Is Better – Bread on the Bottom or Floating on Top?

One of the real problems with fishing with bread is that baitfish will slowly pick away at the bread until it’s gone. The hook is too big to snag them.

Free-lining a bread ball in a weak current is probably the best option. As the bread takes on water sometimes it will slowly sink with the weight of the hook and this natural sinking action will trigger some fish.

If your bread ball is small enough you may catch trout with it as it resembles salmon eggs.

If there are birds around that love bread, you’ll be better off fishing the bottom.

I’ve seen a few articles about these types of bread as bait and they are not recommended as you’re just wasting time. Use the tips above and you’ll catch more fish with bread that stays on the hook.

If you want to use any of these types of bread, just throw them in as chum to attract fish because they’re not going to stay on a hook at all.

Crust isn’t any good at all because all the moisture and elasticity has been taken out of it by drying out. You can’t compress it well and it will never stay on a hook.

The following birds may attack your bread from the air, or underwater. Do be cautious if they are around because you don’t want to catch one on a hook and have to remove the hook.

Good luck, and let me know what you catch!