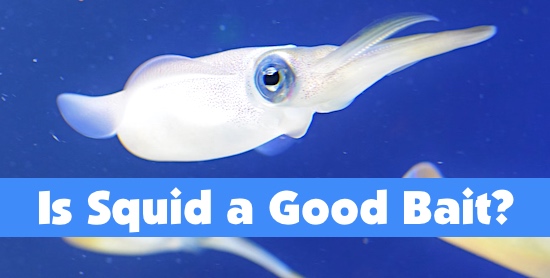 Probably the first bait everyone uses when they go saltwater fishing is either frozen squid or shrimp. Squid is an awesome bait for ocean fishing.

I’m sure I used frozen un-bleached squid for my first time because it was what everyone else was using that I went with and I figured it must be the best.

Squid have a lifespan of 9 months. They are quick growing and a vital resource for human beings and many fish in the ocean that eat squid as a significant part of their diet.

The species most often sold in the USA as bait and calamari is the “Opalescent Squid”. This one is found from southern California to Alaska.

This squid is less than 10 inches long at adulthood and tube-shaped. It has a triangle point at one end and some wide fins. The color is mostly white with brown areas and they can change color.

Pros of Squid as Bait

Cons of Squid as Bait

Is Squid the Best Bait for Ocean Fishing?

Not the best, but squid is one of the top 2 baits you could use. Live shrimp or a live small bait fish is the best fish to use for catching saltwater fish in the ocean.

You may not catch the fish you want, but you’ll definitely catch fish on squid or shrimp. You’ll even catch more on shrimp, but overall the fish will be smaller because the little pinfish and other grunts and small baitfish will pick at a shrimp on a hook.

Does Squid Catch Many Fish When Used as Bait?

Squid makes it easy to catch some fish, so it is a universal bait that is excellent for noobs or children that you don’t want to introduce to putting hooks through live bait fish.

How Often Do Saltwater Anglers Use Squid as Bait?

If you go to a fishing pier, you’re going to see about 70% of people fishing using squid as bait.

It’s easy and available and many people don’t really know much about fishing and what they’re even trying to catch, so they put some squid on, sink it to the bottom with some sinkers, and hope for the best.

This DOES catch fish, but maybe not the fish you want.

The other 30% of anglers on the pier are using better baits to target exactly the fish they want to catch.

Large pinfish (a baitfish), mullet, or trash fish caught and cut up for bait are used by most people fishing for specific fish.

How Much Does Frozen Squid Cost at the Store?

At Safeway, we just saw a price of $16.99 for 3.0 pounds of whole raw frozen squid. This is one of the most common brands from the Monterey Fish Company in Salinas, California. In the USA, Safeway and Walmart and any large grocery store will have frozen squid like these or similar.

How To Catch Sharks and Rays Using Squid?

Both of these fish love squid, so you’ll need a large hook, possibly as big as the palm of your hand. a #8 hook that’s very strong works well.

Sharks and rays are easily hooked because they take the entire bait into their mouths quickly and you can set the hook right away.

Using a Carolina type rig you can use a 1-2 oz. sinker to keep the weight on the bottom and a few feet of wire leader which can be directly attached to the hook, or use 100 lb. test to connect to the hook.

How To Catch King and Spanish Mackerel Using Squid

King mackerel and Spanish mackerel both love squid in 3 inch strips and an inch wide. These make excellent bait for mackerel.

A size #4 hook and a simple split-shot sinker four feet up the line works well. Cut strips of squid and drift them in heavy tide, or pull them slowly through still water.

Allowing the squid to drop a foot or so under the surface will often prompt a strike from mackerel and other fish like Crevalle Jacks.

How To Catch Flounder with Squid?

Flounder fish live on the bottom and wait to see something in the sand or dirt before attacking. They’ll often lay completely under the sand with only their eyes sticking up.

To catch flounder with squid cut 1-1.5 inch strips and put them on a 1 or 1/0 hook. Don’t cover the hook, leave the sharp part exposed.

Clip some split-shot sinkers about 6 inches from the hook. Throw your squid out and let it sink to the bottom. Drag it through the sand to kick up some of it and entice the flounder to strike.

Unfortunately, you’ll also catch some unwanted fish, but this is a great way to catch a limit of flounder if they’re in the water you’re fishing.

How To Distinguish Squid from Octopus?

Squid swim in massive schools and are attracted to bright ultraviolet lights at night. Octopus are solitary and don’t go toward these lights.

Squid have a couple inch long body even up to 1 foot long, and 8 short arms a couple of inches long and 2 longer tentacles. Longer body than tentacles.

Octopi have a shorter body and 8 longer tentacles.

How Are Squid Caught?

The squid boats can be seen from many ocean shores after the sunset. They have some oddly-colored green ultraviolet lights that attract the squid in huge numbers.

The nets are already out and they simply lift the nets and collect hundreds, sometimes thousands of squid like this.

What Do Squid Eat? How Can I Catch Them?

Squid eat shrimp, crabs, smaller fish, and even smaller squid. They are not very choosy. They are voracious eaters.

There are squid lures that are dragged through the water fast and the squid will attack them and get caught up in their many sharp prongs.

The lure is very unique looking. I’ll show one below. Click the image or here to see them at Amazon.

Caution – when caught, squid squirt an inky jet of liquid at you forcefully and can hit you in the face or cover your clothes with the purple mess! Check out the video after the lure!