Is Shrimp a Good Bait for Fishing in the Ocean? 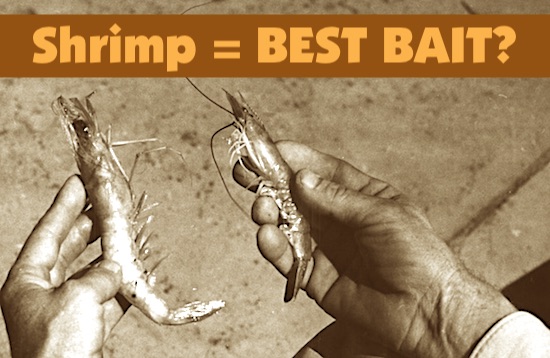 Shrimp is one of the best baits for saltwater fishing because you can catch more species with it than anything else.

Your chances of catching a fish with a small 1/0 hook holding a live or dead shrimp and throwing in the line with a sinker, a float, or just free-lining, are very good. Shrimp is a super-bait, along with cut pieces of squid.

What Saltwater Fish Can Be Caught with Shrimp?

Some of the Best Fish can be caught using live shrimp. Here’s a short list of some fish frequently caught on shrimp bait.

Just about every fish in the ocean loves shrimp. Shrimp are bite-sized and packed with nutrition so many fish have come to love them and they are a primary prey of many fish.

The two most popular baits for saltwater fishing are shrimp and squid. Shrimp are a bit more expensive per pound, but probably worth it depending on what fish you’re targeting.

When I go pier fishing or shore fishing I always stop by the bait shop and get 2-3 dozen live shrimp because I can catch anything on them.

Shrimp are constantly swimming and feeding crustaceans that have long and thin abdomens filled with strong fast-twitch muscles, short and weak legs, and long antennae.

In Florida the white, brown, and pink shrimp are the most commonly found and harvested or used for bait.

There are thousands of species of shrimp, some of which grow to 10 inches and more. The big ones are called prawns.

Shrimp are shaped like crawfish or lobsters without big pincers. They are light colored in Florida and have a tasty white meat in the tail that people find delicious. Shrimp in garlic butter is one of life’s great treats!

Shrimp live for 1-6 years. Since 2007 shrimp production has been taken over by shrimp farms which produce more than we take from the ocean. This is highly sustainable but prices have gone up considerably.

Shrimp are quick growing and a vital resource for human beings and many fish in the ocean that eat them as a significant part of their diet.

Pros of Shrimp as Bait

Cons of Shrimp as Bait

Is Shrimp the Best Bait for Ocean Fishing?

Yes, shrimp is the best bait you can use for ocean fishing because it catches more fish than any other bait.

Though you may not catch the fish you want, you won’t have any trouble catching some species of fish on shrimp. Go to a pier and you can catch a lot of good fish on shrimp like snapper, sheepshead, and jacks. Go during a moving tide for the best fish catching experience.

Does Shrimp Catch Many Fish When Used as Bait?

Shrimp is an ideal bait for children and other people just starting out as it makes fishing fun immediately to be catching fish fast after throwing your line in.

How Often Do Saltwater Anglers Use Shrimp as Bait?

If you go to a fishing pier, you’re going to see 50-60% of people fishing using shrimp as bait. It’s more expensive than squid so more people use squid.

Most people KNOW to use shrimp as it is such a perfect bait for so many fish. It’s easy and available and many people don’t really know much about fishing and what they’re even trying to catch, so they put some shrimp on and hold on for the ride.

If nothing else is working, shrimp will catch fish for you. Bring some along if you can.

The other 30% of skilled anglers on the piers are using better baits like baitfish to target exactly the fish they want to catch. Large pinfish, mullet, or trash fish caught and cut up for bait are used by anglers who know what they’re doing on the piers.

Crabs can also catch some of the best gamefish (reds, black drum, permit, sheepshead)! Learn where to find crabs and spend an hour picking some up the night before you go fishing.

How Much Do Shrimp Bait Cost at the Bait Shop or Store?

At bait shops in cities where there aren’t many people, we’ve seen frozen shrimp bags for $3 and a dozen small (very small) shrimp for $4. This is NOT the norm in Florida. Live shrimp can be $10 a dozen. Keep in mind that the big snook love big shrimp and it might make sense to buy a dozen big ones or more if you can keep them alive in a big aerated cooler.

Also keep in mind that a steady supply of oxygen is not the only thing you need with your bait bucket or cooler. You need the right temperature and fresh water. It’s best to keep a bait bucket IN the water on a rope so you can pull it up when you need it. You’ll keep shrimp alive longer like that.

How To Catch Big Snook on Shrimp?

Big snook love huge live shrimp. Using a #1 o #2 hook you can hook the shrimp through the tail and if it’s heavy enough, cast it over to where the snook is and let the shrimp fall naturally through the water. If not heavy enough, you can add a split-shot sinker 12-18 inches up from the hook. The snook will sense immediately that the shrimp has something wrong with its tail and strike right away.

Don’t drop the shrimp on top of the snook, drop it a few feet away.

How To Catch Sheepshead on Shrimp

Sheepshead are caught on shrimp or crabs. It’s one of my favorite fish to catch in Florida. We have a big guide on catching sheepshead here.

Using a small and very sharp hook like Gamakatsu or Owner, put a bite size piece of fish on the hook and drop it down near one of the concrete pylons. Ideally you’ll be chumming by scraping barnacles from the pylons to get the fish in feeding mode. Read the guide, there is a lot of great info on habits, bait, and gear for sheepsheads.

How To Catch Flounder with Shrimp?

Flounder fish live on the bottom and wait to see something in the sand or dirt before attacking. They’ll often lay completely under the sand with only their eyes sticking up.

To catch flounder with shrimp, put a small to medium one on a size #1 hook or #1/0 hook. Don’t cover the hook, leave the sharp part exposed. Add some split-shot sinkers about 6 inches from the hook. Throw your dead or live shrimp out and let it sink to the bottom. Drag it to throw some of the sand up in the water and the flounder will see this and strike because it looks natural.

You’ll also catch catfish and rays like this, but this is a great way to catch a limit of flounder if they’re in the water you’re fishing.

How Are Shrimp Caught?

Boats net shrimp at night when they school around the lights. Shrimp also school in huge numbers when spawning.

Most shrimp are not caught, they are farm-raised since 2007.

How Can I Catch Shrimp?

If you have a boat or a dock, you may see shrimp in the water and use a small-holed cast net (throw net) to throw over them. You can often see many shrimp at night near ocean piers but the piers don’t let you thrown nets because they frequently get caught around the concrete pylons and litter the pier with nets. Very few piers allow this. Here are the Florida Shrimping Regulations.

This is a great video, I love the guy’s energy. He first goes to a pier to scoop small shrimp with a net. Then he goes and catches lots of fish with those tiny shrimp. Check it out! An easy way to learn about fishing with a fun video.