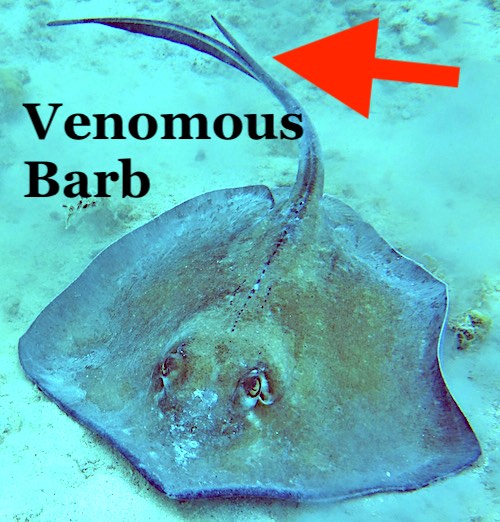 Why? These areas are packed with nerves that provide you with a very fine sense of touch. Get stung in one of these places, and it’s no fun.

It seems to hurt about five times more than being stung in say, your bottom.

We’ve all been stung by bees before. Some of us in the hand. I remember a couple of instances of this, and yeah, it hurt. When I was a kid, it seemed to hurt more.

I think the fear factor had something to do with it. As I grew into an adult and was stung by bees, caterpillars, scorpions, and other stuff, it wasn’t that big of a deal. It hurt, sure. Lots of things hurt.

Watch the video of the story – and listen as you work – or just continue reading below.

I was pretty sure I was past the curve on this. I figured, as an adult, unless I was in a motorbike crash or someone shot me in the gut, I’d probably not experience a lot of pain anytime soon. Certainly not pain I couldn’t deal with.

That all changed one beautiful sunny day while fishing knee-deep in Clearwater, Florida. Clearwater is a beautiful beach with a fishing pier and thousands of people enjoying the beach, but in spite of this, there are still fish in the surf.

I was out there throwing some shrimp out in my bare feet while wade-fishing. I had fished for years. I knew that if I shuffled my feet I’d be fine. If you’re from Florida, you know it too.

Shuffle your feet and it will scare the stingrays around you who are half-buried in the sand just waiting around to ambush something to eat. Their venomous barbs are used for defense in case you get too close.

Well, I shuffled my bare feet and shuffled right over what I thought was a sharp shell or rock and lifted my foot up for a second, then put it down about a foot away. Bad move!

Apparently, I stepped right on a venomous stingray barb because the ground beneath my foot moved and I felt a dagger shoot straight into the bottom of my foot.

I knew immediately that it was a stingray, I saw it moving away through the shallow water.

What I didn’t know was what exactly happened. I thought I must have stepped on a very sharp piece of beer-bottle glass or an old rusty nail or spike or something. The pain was fierce!

I lifted my foot to have a look and I was bleeding pretty good. So much blood that I couldn’t really see the wound. I scooped up some salt water and poured it over to clear the blood. I could see a 3/4″ slice in my skin, in the shape of an ‘L’.

The pain was so severe, I was sure I still had something stuck in my foot that I had to remove.

I hopped out of the water for about 80 yards toward the lifeguard tower. Nobody was inside, so I hopped and stumbled toward my car. There were hundreds of people on the beach, many of them looking at me.

I couldn’t cry, but the pain was so intense I thought I could break out in tears at any point. It was weirdly scary to me that the pain was so strong. I never felt anything like it up to that point.

As I reached the car, I literally threw all my stuff into the back seat and shut the door and screamed like a maniac something like “WHAT THE F”IN F THE F IS THIS F”N F!!??

It didn’t help my foot feel any better. In fact, the problem with this stingray sting was that nothing affected the pain. It was constant and never stopping for even one second.

Not even a split second. In fact, it seemed to be getting worse. I think it felt like it was getting worse because my mind was having trouble dealing with it because there was absolutely NO BREAK IN THE PAIN. It was steady. Neverending.

That made it more scary.

That made it hurt worse.

The pain was a burning sensation. It was as if someone was holding a blowtorch to the bottom of my foot… and they NEVER MOVED IT AWAY OR TO A NEW AREA OF MY FOOT.

The pain was in exactly the same place and never moved.

As I drove to a clinic I knew of, I contemplated going to the emergency room of the hospital instead. Today, I would have done this. I could have got a shot of some kind to take away the pain.

I arrived at the clinic in mindblowing pain and distress. The pain was insane, and what compounded the pain was the fact that my mind just couldn’t comprehend the fact that the pain never abated for the slightest moment.

I’d never had pain like that before. We’ve all had pain before. You break a bone. You roll an ankle. You slam your finger in the car door… whatever.

Pain in every other instance in my entire life – ABATED FOR AT LEAST A SECOND OR TWO every now and then.

Anyway, to wrap this up. The clinic put hot compresses on my foot. Within 30 minutes the pain had lessened and my anxiety wasn’t off the hook anymore.

They x-rayed my foot and didn’t find any part of the stingray barb inside my foot. Apparently it was just a quick in-out and spurt of venom, and that was it.

I can still remember the pain of this stingray tail barb in my foot. Unbelievably intense.

It wasn’t until I went to Thailand and was talking to a guy at the beach with a bandaged up ankle. He told me that he was stung weeks ago by a stingray in the sand under the water.

He struggled for words to describe the pain he experienced. I just nodded and told him, man, I’ve had a stingray barb in my foot and the pain was ridiculously bad.

We bonded instantly as we talked about our experiences. His wound became infected with staph, so his experience was even worse than mine.

Unfortunately about ten years later I was stung by something else that hurt even worse than the stingray.

I was stung by a box jellyfish while snorkeling off the island of Maui.

Are Stingrays Good to Eat? Some people actually eat them. Some people like the taste. See what they say it tastes like (not chicken).