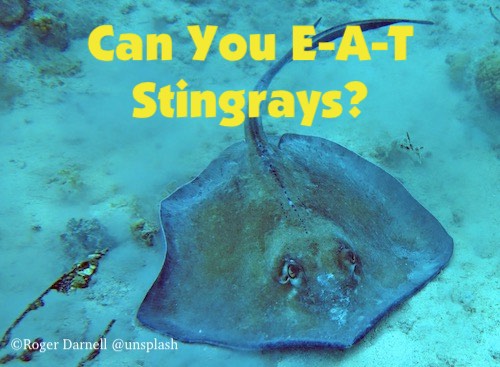 OK, here’s one for my friend Martin who says he thinks I’ve eaten everything in the water. It is not true! I have had urchins, shark, alligator, eel, and other weird stuff but I have NEVER eaten a stingray.

Just never had the opportunity or the inclination to be honest! I had heard rumors that they can be eaten and that some people said they taste like poor-man’s scallops. That never appealed to me. LOL.

The reviews are mixed and you’ll have to try it for yourself. Many people enjoy the taste and they’ll eat it a few times a year. Others say it tastes like ammonia because the stingrays store urea in their muscles.

That too, just doesn’t seem appealing. My guess has always been that I wasn’t going to enjoy it, so I never made it a point to try eating it. Some people call them “poor man’s scallops” which makes me want to try eating stingray even less than I did before hearing that.

I WOULD try it though. I think. Maybe I’ll make it a goal for this upcoming year. 2023. Heh-heh… Still not very motivated.

Some will have you believe it tastes DELICIOUS like a delicacy. If you watch the video below about how to clean and filet stingrays, you’ll see what I mean. Others cautiously recommend it and say it’s ‘good.’

Still others say it’s worse that eating flogged horse and can’t believe anyone eats it. I don’t know. Does it taste OK? I still doubt it, but try it for yourself if you must know.

For me? I don’t have to know. I don’t really care to be honest!

As I said, I’m not going to chase it down.

They are not known to be and the Department of Health do not typically regulate consumption, so you’ll probably be fine eating it often if you choose to.

Can You Get Sick from Eating Stingray?

If it’s cooked well, you shouldn’t get sick from eating stingray. No, you cannot eat the tail or the stingray barb! Cooking should kill whatever is in there that could cause any damage.

That said, I’m going to use my get out of jail free card and say that ANYTHING can cause you to get sick, and eat it at your own risk. 😛

In What Countries Do People Eat Stingrays Often?

In Florida though I’ve fished with a lot of people, I’ve only heard others say they knew of someone who ate stingray but hadn’t eaten it themselves.

I think I know why this is, in Florida there is just too many other great fish to eat in the ocean and there’s no need to even try stingray if it’s of little food value because what is the point?

It isn’t difficult to catch snapper, great tasting speckled trout, snook, redfish, or flounder. All of these are incredible fish on the dinner plate.

I can see that in some countries like Burma, Malaysia, Indonesia, Philippines, Vietnam, and Cambodia the local population probably eats stingray quite a bit.

Do Stingrays Make Good Bait for Other Fish?

Grouper and Sharks eat stingrays, so yes, you can catch them and bait your hook with them if you feel like it. They are an unregulated species so you can catch as many as you want. I’ve never known anyone to do it, but you can be the first I guess.

Be careful of the venomous barbs in the tail, they can whip them around and punch holes in you that hurt like a chemical burn.

How To Easily Catch Stingrays with Line and Hook?

Stingrays love sandy bottom and they eat dead stuff mostly because it’s easy to grab. Their mouth is on the bottom.

Put a small (3-4 inches) dead fish on a 2/0 hook with some weight close to the hook and let it sit on the bottom in the shallow sand. You’ll probably have a stingray before long. Or a catfish!

How to Clean and Cook a Stingray to Eat?

Nothing explains this process better than a video. This is very short and sweet and shows exactly how much to cut off and keep for a small stingray. These folks are lovers of stingray and say it’s delicious and that some restaurants will cut it with circle cutters and call them scallops!