Fishing Stories – Spearfishing On the Worst Day of My Life 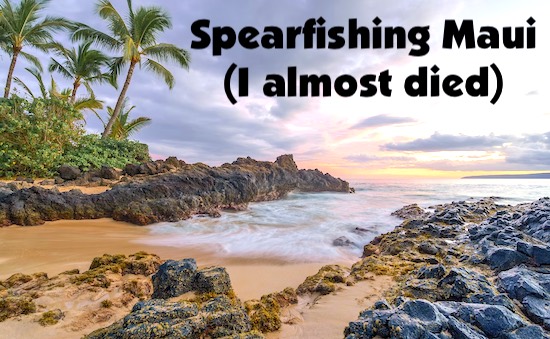 I still remember the day this happened so clearly.

It didn’t start out as the worst day of my life. I hadn’t the slightest idea that a few hours later I’d be wondering if I was gonna make it.

I was up around 6 am. to eat fresh fruit and egg omelet and get our stuff packed for a road trip over to Olowalu Beach on Maui’s south shore.

I had just bought one of those 3-section screw together fishing spears with three prongs and I wanted to try it out over at this very small beach (patch of sand really) we saw a hundred times as we drove by on the way to Kahalui or down to Kihei to surf or snorkel.

Want to See the VIDEO instead? I just read the entire story on the video. It will free you up to listen as you drive or whatever you’re doing. Watch now or continue reading below.

The morning was picture perfect as were most days on the Hawaiian Island of Maui.

I lived in a small ohana with my girlfriend, a Filipina girl i met on Oahu the year before. She was an accountant and worked across the street from me.

I worked as a marketing director for a property management firm in Lahaina. It’s a cozy little community that I can hardly call a town.

I lived on the island for just about a year by this point. I loved the ocean. We only lived about 100 yards from the closest water, a great little snorkeling spot that I went to a few times a week.

Spearfishing was to become a major part of my life with the purchase of this new spear. I was anxious to see what I could do with it.

I was really excited to try out my new sling spear and the tiny little beach at Olowalu had a lot of coral reef around it. I figured I’d find an octopus I could spear and use as bait for the Giant Trevally (GT) that Hawaiians called ulua.

These are part of the jack family and they can grow to over 100 lbs. They’re prized for their fight but the bigger they are the worse they are to eat. The younger GTs are much better eating.

So I was looking forward to finding an octopus to use as bait for fishing for ulua from the cliffs at night. Maui has so many rocky volcanic cliffs where you can sit at night and fish in very deep water.

I had been using squid and cut bait but I wasn’t catching any ulua at all.

So we filled the back trunk of my old 95 Honda Prelude (this was 2003) with picnic food, beach umbrella and towels, water to wash off with (no showers at this beach) and snorkel gear and spear.

The ride was about twenty minutes with no traffic, as usual. Maui has little traffic except during rush hours and the occasional popular event downtown like a concert.

We pulled up to the beach on the side of the road and parked. It was immaculate. It was 7:30 am. The sun was already rising fast. Warm sunshine filled the air and the cool of the morning was just wearing off.

We were the only people there. It’s what we counted on. The small beaches of Maui rarely have anyone there!

We unpacked the car and laid out our woven beach mats and put up the umbrella. The wind was stronger than usual and we had to take the umbrella down right away before it blew across the highway.

I walked down to the water’s edge and sat down in the wet sand to put on my fins, mask, and snorkel.

The water was cooler than I expected. I usually snorkeled and surfed in the afternoons after work when the water had time to warm up over the day.

I was so excited to float over the reef and look for fish and octopus to spearfish.

I saw many kinds of fish and other sea animals but not one octopus. I practiced shooting the spear into the sand to make sure I could hit something when I finally saw it.

I was out there for almost two hours when I decided that my back was going to be burnt dark red if I didn’t get out soon and get my shirt and sunblock.

I slowly kicked in toward shore and found a place of small rounded pebbles in about 18 inches of water where I could sit and remove my fins.

As I moved to sit down I felt a slight hot spot on the inside of my left leg. I sat down and looked under the water with my mask. Nothing to see. I pulled my mask off and took off one of my fins.

Then I felt a very warm burning on that spot. Within seconds I was frantically scraping on my leg with the fins to try to get whatever it was off me.

The pain went from 1-2 to 10+ in seconds. I yelled to my girlfriend to tell her to start getting the stuff in the car NOW because I was stung by a jellyfish. She was torn between getting our stuff and coming over to me to see if she could comfort me.

I didn’t want any comforting, I just knew I needed to get to a hospital real quick because I could already feel my heart beating out of my chest.

We gotta pee on it! I screamed. I didn’t have to go, having relieved myself multiple times in the water while I snorkeled. She couldn’t get anything up either.

Then I couldn’t think straight. At all. About anything. She would ask me questions and I couldn’t respond. I remember wondering what exactly was happening. Why was I unable to think or speak right?

She pulled me up toward the car as I told her I can’t even think clearly.

I flopped down in the seat and we drove to the hospital. My leg was on fire like I’d never experienced pain before.

Previously I stepped on the venomous barb of a stingray at Clearwater Beach in Florida. This was even more painful because the sting locations were all over a roughly 8-inch circle area.

I had a bright red road map of chemicals burns all over my inside thigh.

The pain was like what I imagined some very strong acid eating away at my body. Just like the stingray venom, the box jellyfish venom never lets up.

The pain was constant with never a slight break for a second so I could regain my sanity. It was ridiculously strong.

In my mind, as she drove, I was panicking. My heart was going to break, I was sure of it. My mind was going to lose touch with reality, I knew it. My heart would just go boom and that would be it. I’d die in the car.

I remember thinking that death was preferable to what I was experiencing. I wasn’t sure how much more I could stand, and it kept up steady and stronger and never letting up at all.

I was losing my mind for sure. How can I deal with this pain? It was as if my ability to control my mind was loosening with time and I was going to go insane in the next few seconds.

That fear of what happened when I either had a heart attack or lost my mind continued for 20 minutes to the hospital.

The nurse cracked some chemical packets that blended and got hot. She put that on my leg and it wasn’t easy to keep them there considering now it hurt EVEN WORSE with the hot water on there. It was just ludicrous amounts of pain all from this little stinging beast!

I stayed at the hospital for a few hours. I was constantly putting fresh hot packs on my leg. After a couple of hours, the pain began to lessen. I couldn’t believe it. The hot water was breaking down the venom somewhat FINALLY.

My clear thinking came and went. My heart rhythm and intensity slowed down slightly after an hour or so. Eventually, it all cleared up and I was able to go home where we continually put hot water on my leg for hours and hours.

I remember falling asleep that night wondering if I was going to wake up.

It was the kind of experience that wrecks the mind. You realize how fragile you are. It makes you realize, you haven’t done everything you want to do yet.

Maui is nice, but what about Asia? Europe? What about getting that boat you always wanted? What about children?

For more than 5 years I had a red road map of burns on my leg. It slowly faded, but it was a constant reminder that even something that small and nearly invisible could be the ultimate reason you leave this human body.

This really contributed to my outlook on life.