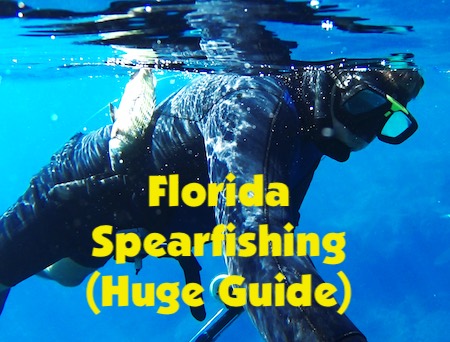 There’s something really underwater caveman about spearing fish underwater that goes way beyond hunting on land or fishing any water.

How To Start Spearfishing?

I started with a Hawaiian sling spear and a snorkel mask. I lived close to the beach, so I’d just walk down and jump in. Later I bought fins for my feet because they help a LOT to help you get down and stay down. A weighted belt would be quite helpful as well so you didn’t expend so much energy and oxygen getting down to the bottom and staying there.

Fish you can spear (see which ones are legal and which are not) are probably down around the bottom if you’re spearfishing just off the beach or around some boat docks on a saltwater canal.

With the gear above, slip into the water quietly and take a peek at what is swimming around you. There might be something within reach immediately, as fish don’t always move quickly to put some distance between you and them. Most do, but it’s worth a look!

I usually swim on top of the water for a while until I find a spot where I can see fish below. Wait. Here are the steps I usually follow when spearfishing.

STEP #1 – PUT YOUR GEAR ON! Put on your mask, weight-belt, and fins. Hold your spear in your hand. The easiest rig is a long metal spear with about a foot long rubber tubing in a circle at the non-prong end of your spear.

You might crank the spear back in ready position if you feel lucky and something is right around you as you get into the water!

STEP #2 – SCOUT THE AREA. Float around and head toward some structure or rocks. Anything that might hold fish. If you’re on the beach or in the shallows you might target sheepshead, snapper, flounder, Jack, or a black drum.

All of these are good eating to me, but some people think Jacks taste a little strong, a little oily. They’re fine, try ’em! Note – the best inshore fish you’ll ever eat is a sheepshead, so if you see them… you know.

STEP #3 – SUBMERGE WHEN YOU SEE A FISH YOU CAN SPEAR. That’s not the only time, also submerge when you see something you can check out where fish may hide. Fish love hiding in and behind things.

When you get down to their level you can sometimes see them. It’s the thrill of the hunt. Our caveman brains go crazy in this mode. We were made for this. Take your time and line up your best shot. Keep trying, it gets easier!

STEP #4 – AIM CAREFULLY AND REALIZE, YOU’RE GOING TO MISS OFTEN! You’ll miss a lot when you first get started. Sling spears are tough to aim at first and it will take some practice.

Some people use the 3-prong spears (I did), but you’ll have to be quite close to the fish you’re spearing because the sound of the three-prong spear coming through the water is quite loud compared to a single prong spear. Try both if possible and see which you prefer.

The single-prong spears go a lot further and a lot quieter. Once you learn to aim it, you’ll spear more fish.

Once you get a spear gun, your aim and accuracy will increase considerably!

STEP #5 – GET THE FISH TO THE SHORE! Once you successfully spear something, get it into the shore quickly before the blood attracts sharks. Once sharks get the blood in their system, they may nip at YOU too. This is a good reason to swim with at least one buddy when you go spearfishing.

STEP #6 – KILL IT. Using a long thin blade, stick the brain with it or cut the gills so the fish bleeds out and dies quickly. Don’t let the fish suffer too long.

Where Is the Best Place to Start?

A saltwater canal would be a good place to start spearfishing. There are lots of fish you can spear legally like snapper, black drum, and sheepshead. You should protect your feet when snorkeling or spearfishing in Florida because there are oyster beds and junk in the water in the canals that will cut up your feet real quick.

You can also try just off the beach as long as nobody is fishing close by. Nothing like getting a hook in your ear.

Keep in mind, you have to check your licensing requirements below, and not all fish are in season all year round, so you’ll need to check the fishing seasons charts we have below too!

What Kind of Spearfishing Gear Do You Need?

If you want to get started quickly and cheaply, there isn’t a lot you need to get started. We’ll cover the essentials below, and really all you need is a sling-spear (Hawaiian sling spear) which you hold in your hand to launch with surgical rubber tubing and some goggles or a snorkeler’s facemask.

Those are the two essentials. Here are some recommendations.

This needs a photo to explain, so I’ll refer you to a video that shows a guy using one. It’s a cool little invention. I wonder if Hawaiians really used something like this. They would have had to have strong rubber bands or tubing, so I think only from the 20th century forward did they have something like that.

A long metal spear at least 5-feet in length with a prong end of 1-3 prongs (usually). At the other end is a 20-30 inch long surgical tubing tied to a hole in the speargun usually with rope or heavy cord.

You operate the sling by hooking the thumb of your shooting hand through the loop and grabbing the spear with the same hand. Grab closer to the prong to crank back the spear. You shoot the spear by letting go of the metal spear. The spear goes forward quite fast. Hint, lower number of prongs = faster spear.

I used a sling spear very similar to this one below. A three-piece screw together spear, but mine was around 6 feet long. This one is 5 feet. The longer you get, the further it will glide. 5 feet is fine as your’e getting started because your aim isn’t going to be good enough to shoot long distance.

Check to see if this is available >

This is what most people are familiar with because you’ve probably seen videos of spearfishers down 30 feet deep or more and spearing huge tuna, wahoo, grouper, amberjack or some other amazing fish. Spearguns can use one, two, three, or four rubber tubes to help fire the metal spear faster.

Some spearguns have a spindle or reel that holds strong line so when your spear goes out, it’s attached and you can retrieve your spear.

Ideally your gun is buoyancy neutral, meaning just like you with your weight belt, your gun is not sinking or floating. Imagine trying to shoot your gun with one hand for a quick shot, and it wants to float up because your arm isn’t strong enough to hold it down! Below is an ideal speargun to start with.

Guns are expensive, you’re going to be surprised that most of them are over $250. The best ones are close to double that. Below is an entry-level gun that will help you decide if you want to spend $400+ for a professional wooden speargun as you become addicted to the sport.

Scuba fins are great for spearfishing. Bodyboarding fins like Churchill’s will work to some degree but you should go with a longer fin to get more thrust with each kick. Below are perfect fins for beginners. Of course, if you already have short fins, use them to start.

Below is a package of snorkeling/spearfishing gear (other colors too) by HEAD. You may know them as making tennis racquets and other gear. This set got great reviews and it’s not too expensive. It’s probably best to buy the set instead of items separately so you save a bit of money.

Who knows if you’re even going to like spearfishing! (you will!) The neoprene heel strap looks extra comfortable.

Check Availability of this Set Here >

How Popular is Spearfishing Over the Last 18 Years?

The chart below from Google Trends shows that interest in Spearfishing (spear fishing) has decreased over time dramatically. I wonder if that is because of the ethical treatment for animals movement has taken hold. I really have no idea, but the data speaks volumes. Spearfishing is on a serious downtrend in the USA.

Laws covering spearfishing in Florida saltwater and freshwater are extensive. Please pay attention to these laws, Florida State does not go lightly on lawbreakers when it comes to our natural resources like fish and other wild terrestrial and marine animals.

Remember to pay attention to WHEN you can spear fish. Fishing seasons for each fish are listed on these pages

How is Spearfishing Defined in Florida?

Spearing is catching or taking (harvesting) a fish by spearing, gigging, or bow fishing or with any device used to capture a fish by piercing its body.

Spearfishing is defined as the catching or taking of a fish using a hand or mechanically propelled single or multi-pronged spear or lance, barbed or barbless, operated by a person swimming at or below the surface of the water.

What Is Not Considered Spearfishing?

The spearfishing law does not include the taking (harvesting) of fish through the use of a hook and line, though the hook does pierce the body, there is a distinction between the methods used. Also different is snagging (snatch hooking) which is defined as dragging hooks through the water on a line which pierce the body of the fish.

What Tools Are Illegal to Use for Spearfishing?

Is Spearfishing Legal in Florida Freshwater and Saltwater?

Which Fish Are Illegal to Harvest While Spearfishing?

What Fish Are Legal to Spearfish?

What Areas Are Illegal to Spearfish In?

Some areas are off-limits for spearfishing. Have a close look at the restrictions below and plan your trip accordingly! The following applies to spearfishing – NOT bowhunting or gigging.

It Is Illegal to Spearfish:

Can I Spear Grouper in Florida?

Yes in season and with the exception of Nassau and Goliath groupers.

Can I Spear Alligators?

A special license is needed for hunting alligators, and yes you can use a spear, bow, or gig. On private land you can use handguns during daylight hours.

Can I Spear Pythons?

Pythons can be killed year round on private property using firearm, decapitation, or captive bolt gun. There are also 25 public lands in Florida where you may kill pythons and other invasive reptiles. This page lists those areas.

Can I Spear Lobster?

No, lobster are illegal for spearing and using and instrument that will crush or penetrate the lobster shell.

Spearfishing is innately dangerous. You’re swimming around with a spear or speargun that could be faulty or you could have an accident and the gun could go off when you don’t want it to. Like firearms on dry land, keep your spear pointed in a safe direction at all times.

Never point it toward people or fish you don’t want to spear. Make sure your equipment is in top condition before you go on a hunt. Use good quality equipment, not cheap stuff you find at a drastic discount.

Sharks can be a real problem for people spearfishing so your best practices should include getting the bleeding fish out of the water as soon as possible after shooting one.

Spearfishing is a lot of fun and can be enjoyed by teenagers and adults alike. There are many rules to abide by, but once you know them you’ll be free to pursue this amazing activity as often as you can. Below are some resources you can use to find out more!