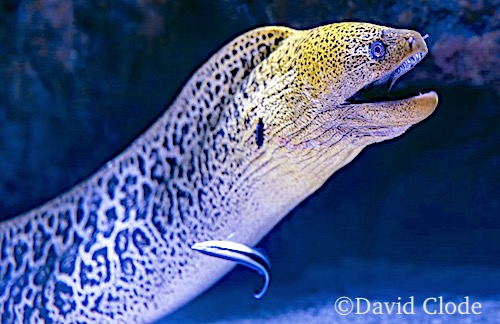 I bought a Hawaiian 3-prong 3-piece sectional spear, some good fins and I was in the water almost daily looking around for fish to spear and eat.

Food is ridiculously expensive on Maui (any Hawaiian island) and it seemed like a good idea to save $40-80 a month by finding our own fish spearfishing.

Watch the Video of the Story here, or just keep reading below. This will free you up from having to sit and read it.

This was a shallow area. I had to swim out a hundred yards to reach 15 feet depths, so usually I stayed in 10 feet or so.

I had been fishing at night off some of the cliffs on the west side of the island, out past Kahana and I was always buying my bait. I was after some GT (Giant Trevally) or Ulua as they’re called in the islands.

One of the best baits to use for ulua is eel. They love it. I was set on catching a big ulua and I knew I needed to spear one of those Moray eels I saw while spearfishing.

I had never speared an eel before, but that was my target for this early morning session as I walked down the hill to the beach around 7:30 am.

I sat on the same rock I always did and looked out onto the flat Pacific Ocean.

This area was ideal for snorkeling and spear fishing because the visibility was usually close to 100 feet and I had never seen a shark in the area, even when I had speared a couple of fish.

The water was bathtub warm, as always. I scanned for jellyfish and didn’t see any so I headed out just around 50 feet from the shoreline.

This area has scattered rocks and no real reef until you get out further, so I usually just do a slow scan of the bottom and look for something that could be good to eat. Barracuda were fairly common, but no such luck on this lovely morning.

I dove down to the bottom to check out some rocks and a fish I saw that was big enough to eat.

I was down there for about a minute when saw a huge shadow pass over me. I cringed against some rocks just hoping like hell that it wasn’t a big tiger shark.

Tiger sharks are the ones we need to be aware of in the islands, and I was pretty sure that the beast was so big it must have been one of those. My luck held, and I was relieved to see a big sea turtle come out from around the rocks!

In a couple of more minutes I saw a huge eel back into a hole in some rocks. His head was just sticking out of the hole. It was HUGE.

This was the biggest, thickest, longest eel I had ever seen during my sessions. I floated around on the top and tried to figure out what to do.

On Oahu there are a lot of spearfishers and I could have asked someone how to go about it. Internet was in its infancy during this time so I couldn’t get good instructions on how to spear an eel.

I didn’t know ANYTHING about eels. Would it fight once speared? Would it try to bite?

The 3-prong spear I used was good for fish, but for a 4 foot long eel as thick as my lower leg? I wasn’t sure. I took a full 5 minutes to convince myself to try to spear this massive eel! This was unknown territory for me, though I’d seen many of them, I’d always just admired them from a distance.

The plan I decided on was to go straight for a kill shot by hovering over his head and getting the spear as close as possible before letting it go.

I had also thought about not using the sling – the rubber tubing that shoots the spear. I thought maybe stabbing at it would be better.

Then I thought that the arm motion would alert the eel that danger was coming.

The tubing was very strong and could sling the spear at great force. I was probably best to sling it.

The unknown part was what happened after I speared him in the head. Would it be a kill shot? That’d be ideal. Unfortunately the prongs were spread out a bit far and I was coming down from the top.

The profile I could see of his head then was far thinner than from the side. From the side, the eels head is large and an easier target. From the top, it’s quite thin.

I saw this as I got down and was about three feet above him. He didn’t move. He definitely saw me there, but he just watched.

I had already pulled back the spear and was holding it tightly so I could spear him. I wasn’t sure how to aim because it now looked as if the spread on the prongs was too wide.

I pointed the tip toward the eel and tried to be as precise as possible. I figured he’d move some when I let the spear rip, so I figured I’d better just try to shoot at the middle of his neck. That way I’d probabl y hit something.

I had one more moment of indecision before I let the spear go. The feeling was exactly like the feeling as you are lighting the fuse of a large firecracker. Something like a quarter stick of dynamite or M-80 or something.

You think you know what’s going to happen, or you hope you know. You don’t really know though. There’s some real apprehension, but you do it anyway because you figure you’ve prepared as well as you can. You let it go, you light the fuse.

I released my grip on the spear and the force of it jammed it at the eels head just twenty some inches away from the razor sharp prongs.

I heard the clunk as the spear hit the rocks and I couldn’t believe what I saw!

The three prongs of my spear had gone perfectly around the head and didn’t hit the eel AT ALL!

The eel was very quickly up in my face and coming at me as I thrashed around and tried to get my spear between me and this toothy beast!

How in the hell do you go backwards in the water when you’re facing the wrong way?

I quickly expelled all the air in my lungs and backpedaled with hands and feet for a few seconds. I could see the head of the eel right in front of my face, and I was sure he was going to grab my face!

After just 2-3 seconds the big eel turned to my right and went off fast down into some rocks where it could hide.

I never tried to spear an eel that big again after that. I easily lost a year off my life in fear that morning.

Later in Thailand while giving a snake tour, I noticed a guy had a funny thumb. He must have sensed me looking. He showed me that it was actually his toe where his thumb should be.

He was a diving instructor in Phuket. He somehow put his finger too close to a hole in the reef and a moray eel took his entire thumb off in one quick bite.

Anyway, I don’t snorkel in Florida, I think there are too many sharks. I do bodyboard and surf though. Go figure the logic on that one!