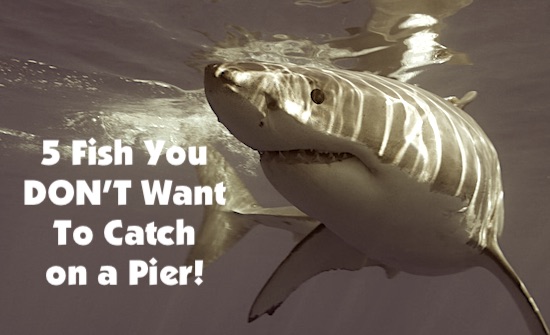 I was just thinking about junk fish, trash fish, garbage fish, rough fish, and fish I hate to catch while fishing at the fishing piers in Florida or anywhere. I wonder if there’s more fish and other creatures in the ocean that I don’t want to catch than I DO want to catch! That’s maybe the topic of another post.

Here are 5 trash fish that I really don’t enjoy catching. Some of them are slimy. Some are dangerous. Some are not worth the effort to drag them the entire way to the beach which might be a mile away if I’m on the Sunshine Skyway Fishing Pier!

Most fish I don’t want to catch are just time wasters because they’re no good to eat or do anything else with.

Let’s count backwards with the worst of the worst as #1.

These are like half lizard, half fish, and all trash. They’re fun for kids to catch and look at because they have massive mouths, tiny bodies, and they’re sort of scary because they’re so weird looking. Their fins don’t stick out much a lot of the time, so they look almost like a snake or eel body. Short snake/eels.

Just plain weird and pointless to catch them. They’ll grab a shrimp in a heartbeat, and it doesn’t matter how much you paid for a dozen!

If there’s a bird dive-bombing fish you let go, give this one a little higher toss than the rest and hope it becomes some bird’s snack.

I know some people are going to tell me they’re great snook bait. I know, I know. That’s why I put it as #5 instead of higher. It has some use.

I never did. I just never cared to catch them. I caught my first shark, a hammerhead, as I wade-fished in St. Petersburg in the 4th Street North area near the mangroves.

If you WANT to catch sharks, see our Shark Guide. Or, just put a dead fish on the bottom with a huge hook and 80 lb. test at least and you’ll have either a shark or a stingray.

One huge problem with catching sharks while pier fishing is that you have to either cut the line and let them swim with a hook and line in the mouth for a month or so.

Or, you have to walk the shark back to the beach – the length of the pier, to remove the hook properly. It just isn’t a good idea to catch sharks at a pier!

Worse than a shark because it’s not nearly as cool, and they will fight you for 30 minutes using their body to catch the water so you can’t reel them in.

I really hate landing stingrays. I don’t eat them. I’m not amused by them. I’ve been cut open by a stingray barb in the foot that hurt like almost nothing I’ve ever felt (the box jellyfish was slightly worse).

The best way to avoid catching stingrays is to fish with live bait that moves around. Stingrays prefer dead stuff on or near the bottom.

There’s definitely nothing I dislike catching more than a catfish. There are many reasons for this, but the primary one is that I catch SO MANY of them. I like to fish the bottom with live or dead bait for fish like flounder, reds, black drum, pompano, and others.

The dam* catfish are everywhere on the bottom and eat whatever you put there unless it’s moving fast.

Catfish are horrible to eat. They smell. They’re slimy. They have really tough skin to get off if you DO want to try to cook one up. They have fatty meat.

I imagine they’re storing a lot more toxins in their fat than other less fatty fish. I have no idea if that’s true, but I honestly just don’t care!

Catfish have a barb on the top of their dorsal fin that they can stick you with. I’ve had this twice. They inject venom with it, not unlike a stingray tail barb! It hurts like mad and it’s always when they unexpectedly flip around in your hand after being motionless for a while.

You think they’re calm and you can remove the hook, but NO, they flip and stab and you’re hating life and all stupid catfish!

#1 Worst Fish to Catch on a Pier or Anywhere? SEA HORSES!

Now, the reason might not be apparent, but I’ll tell you.

Catching one of these darling little seahorse creatures on a fishing hook is a lot like shooting a koala bear with a bow and arrow. And it doesn’t die right away.

It’s stuck with your hook in it and it’s looking at you WITH THOSE EYES. And you’ll never forget the pain you caused this absolutely perfect and harmless creature of mother nature’s creation.

You’ll have trouble sleeping and you’ll pee the bed.

I’m proof of this! I mean, if you ever want to feel like an absolute IDIOT and jackass, pay close attention when you catch your first harmless little seahorse that was just bouncing along the bottom looking for a piece of sea grass to hide behind and you snag her in the face or side of the body with your hook!

It’s almost enough to make a guy not want to fish again. Ever.

Now you know… it’s not the stupid catfish. It’s not the ridiculous puffer fish or lizard fish that is the worst thing to catch. Heck, it’s not even the ladyfish!!

She didn’t even make the article, she’d be #6 for sure. A complete waste of time and usually gets your hopes up that you actually got something cool like a mahi or a fast crevalle jack or something.

Then you see it jump frantically into the air and you know. Ladyfish. Waste of time! They taste bad and they bite anything near the top of the water!

Anyway, that’s my top 5 or 6 list of the worst things to catch at the fishing pier.

Wait, we’re not done. Watch RUFFLES the seahorse released back into the ocean. She was rescued and now she is free again! (hah-hah).

We have many Huge Guides to help you with Pier Fishing in Florida. Click this link and see which one is close to you now.