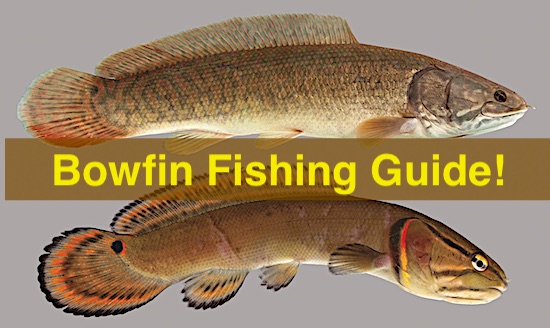 Welcome to our new freshwater angler’s guide, “How to Catch Florida Bowfin Fish Fishing Guide!” These are not very popular fish to catch because people haven’t really heard of them.

They are VERY strong and aggressive fish and they are a BLAST to catch on rod and reel.

Why is that? These are heavy, toothy, strong, aggressive, fish full of energy and fight. When you hook one, you won’t ever ask why they’re fun to catch! Here’s a tip, don’t flop it into your boat because you’re regret it!

Bowfin can be found in most Florida rivers and some lakes.

Species Identification: The Genus is Amia and the full species name is A.calva. These fish are part of the Amiidae family of fish..

There are others that are similar in appearance. We talk about them in Similar Species below.

These are long tubular like fish with a wide head and long dorsal fin that runs from just forward of mid-back to the tail. Males are about 20″ on average, and females 26″.

Similar Species: The Northern Snakehead Fish from Asia looks very similar, and is an invasive species found in some parts of the USA. Snakeheads are usually very dark color and smaller in size.

IUCN Redlist Status: Rated “Least Concern (LC)”. Stable population and not declining. Last assessed in November 2011. Bowfin are not a protected species, nor are they part of any extensive research efforts by conservationists.

Length and Weight: Average fish are 20 to 26″ in length and 5-7 lb. I have caught many bowfin fish over 36 inches before in Hillsborough County so the big ones are out there and they’re not uncommon in the right conditions.

Range/Distribution: These fish are found distributed all over Florida and the United States East Coast up into Canada.

I’ve caught them in many rivers, canals, and lakes in Florida.

Habitat: A preference for warm and quiet water with lower visibility (high turbidity), a soft bottom, and lots of water plants growing in the water. Lakes, ponds, rivers, streams, and backwater areas like swamps can all hold bowfin fish. They have the unique ability to be able to breathe outside of water for up to days if they need to. They can stand low oxygen environments like swampy water and seem to prefer it.

These fish are usually cut by accident the first time by anglers. That’s how it happened to me when I was fishing for bass and crappy in the Hillsboro River. I got a very strong bite and set the hook, and I was in for the ride of my life.

I was fishing from a canoe and my friends were on another canoe a close distance away. They heard me scream!

I had lighter tackle on, maybe about 8 pound test. Even my hooks were not strong enough to fight this fish. I had to baby it to get it in close to the canoe and that’s when I saw its massive teeth.

The hook was lodged pretty deep in the mouth and I knew I had to get the fish in the boat so I grabbed the tail and pulled on the line to flop the boat to flop the fish into the boat.

As I did this, all hell broke loose on the canoe. That fish flopped continuously for minutes as I tried to figure out how to keep from getting scraped by those teeth and get the hook out of his mouth.

I borrowed some long nose pliers and I was able to reach into the fishes mouth and grab the hook and then grab the tail and just pulled it overboard and flopped it back into the water.

This bowfin was about 30 inches long and 7-8 inches high. I have to say it was definitely the highlight of our afternoon.

Some fish you catch so you can eat them later. This is not one of those fish. I wouldn’t recommend eating them, they have a high mercury content compared to other freshwater fish. They live long and they are at the top of the food chain.

Where To Find Bowfin FIsh?

Basically, if you’re living anywhere near a lake, river, or big freshwater stream, you should start there.

These fish like muddy water. If you can’t find muddy water then look for water that has some silt or dirt floating in it. They like cloudy water. In fact, I have never caught one in clear water.

As you might guess, bowfin eat just about anything. They’re opportunistic ambush feeders that use structure of any kind to hide behind and then dart out very quickly (.07 seconds) and grab their meal.

They eat just about any living thing in the freshwater they live in. Adults eat all of the following.

They will eat topwater and middle, and bottom baits so take your pick!

Which predators target them as prey?

Snakes, alligators, and eagles will eat them if they see them, but the dirty water they live in is quite good camouflage from most predators. Alligators will still grab one occasionally. I’ve seen that on a couple of fishing trips.

How To Catch them?

METHOD #1 â€“ Put some strong line on your reel, something like 30 lb. test just to be sure. You’re going to be fishing in muddy or unclear water so the line appearance is not that big a deal.

Get a decent size hook with a large gap and make sure it’s one of the chemically sharpened hooks from Gamakatsu, Owner, or Mustad. You want a strong hook. I can’t emphasize that enough. Sure, it’s a freshwater fish, but you’ll be pleasantly surprised when you see how hard they fight!

Put the hook through the front of a 7.5″ Culprit plastic worm in one of the lighter colors if possible to make it more visible in the murky water. Let the worm fall to the bottom on the cast and pull it through the dirt on the bottom a few times. Every now and then twitch the rod tip and pull the worm up a few inches or a foot and then let it fall slowly as you slowly reel.

METHOD #2 â€“ Same as above, but add vary your retrieve to quicker. You can also go higher in the water column, even skimming the worm across the top if you can believe that. You never know what’s going to make a bowfin bite, but pretty much everything does. They’re voracious eaters!

METHOD #3 â€“ Free line a big shrimp into the water, twitching every now and then as it falls to the bottom. The hook will be heavy enough to sink the shrimp down if you’re fishing in still water.

METHOD #4 â€“ Put something smelly on some cut bait fish or a shrimp and toss it out there to sink to the bottom. If catfish are there, you’re gonna find them. If you do, switch to higher up in the water column, maybe just 2 feet under the surface.

With these 4 methods to find bowfin, you should have caught one by now if they’re there!

I fish using spinners, Lambo, Mepps, Panther Martin, Blue Fox Minnow Spin, etc. Also crank-bait, and spinner baits, swimbaits, work a good part of the time. Livebait like small fish and crayfish will work when the other lures are not.

I did take some time today as I wrote this article to check out what some other people are saying about catching bowfin. For me, I never fished at night for them or for any other freshwater fish.

However, many people are saying that they really get even more active at night. So you might want to try fishing for them then.

I don’t think there is any ideal bowfin rod/reel combination for me. I’ve used just anything I had until I bought a decent baitcasting reel by Abu Garcia that I like a lot to this day. You can catch these fish on any rod and reel, so I’m not going to give recommendations outside of the reel above. Most of the fish you catch will be in the 2-4 lb. range, so any reel with a 6 foot rod with light action or medium-light would be perfect. .

Don’t use treble or double hooks in your artificial lures. These bowfin flop around so much that it’s difficult enough to get one hook out.

More hooks will complicate things and stress the fish more. They consume whatever they bite, so you’ll have no trouble setting one hook. Or, try circle hooks. Some guys have good luck with those.

Live bait hooks (minnows) â€“ These hooks by Gamakatsu are excellent for using large live minnows or other small fish they love. Use this for your plastic worms too, regardless if it doesn’t look pretty like a Texas rig setup with the nicely shaped hook for it. You need a strong hook above all else.

Texas Rig hooks (plastic worms) â€“ These Gamakatsu hooks are the perfect size and strength for catching smaller fish all the way to 10 lb. largemouths if you’re lucky enough to hook into one.

The Florida all-tackle bowfin record belongs to Jim Brown, out of Lake Kissimmee in Osceola County where he caught the world record Florida bowfin fish that weighed 19 lb. on October 5, 1984.

The laws governing bowfin fishing in Florida are simple enough. You can keep what you catch. Why in the world you’d want to eat these fish, I can’t guess. Throw them back in and catch them next year when they’re a pound heavier. There is no size limit or bag limit mentioned in the Florida fishing regulations that I could find.

Don’t cook this fish. Don’t eat this fish. They are not good to eat (bad taste) and they have a higher level of mercury, arsenic, and chromium because they are at the top of the food chain and they live a long time.

[Image credits: The bowfin photo for ID had no copyright. Featured image from Florida Museum of Natural History (holotypes). Map by USGS. Open mouth bowfin no copyright, if it is yours please let us know so we can credit you.]