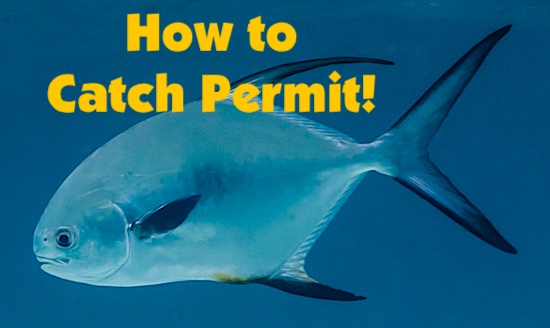 Welcome to our “How to Catch Florida Permit Fish Guide!” Permit are one of the most dynamic fish you can catch inshore because they are strong fighters and delicious on a plate! This is one of the ultimate targets for anglers in Florida and other southern states every year when the water heats up. Wait, it’s warm NOW. GET OUT THERE!

PRO TIP – Permit fish are found from Massachusetts down to Brazil. They have many other names. Here are some: , and . If you know any more, let me know.

Species Identification: Most often caught is from the Family: Carangidae. Genus: Trachinotus. Species: T. falcatus. Originally classified by Linnaeus in 1758.

Permit fish are silver with some yellow and dark highlights. They are laterally compressed which means they look tall and skinny if looking straight on at the head. They look thin from above. These are very muscular fish that can grow to 4 feet long.

With a good pair of polarized sunglasses you’ll be able to pick them out in the shallow water even if you can’t see their tails above the water and they bend down to feed.

Similar Species: Crevalle Jack and Pompano are closely related in appearance to Permit and share the same family, Carangidae. It can be very difficult to tell Pompano and Permit apart.

IUCN Redlist Status: Least Concern (LC). Last assessed 21 August 2012, Trachonotus falcatus is widely distributed across a number of nations and is common and plentiful in Florida.

There has been a slight decrease in fish along the Gulf coast but since the fish is so abundant in other areas it is assessed as a fish of Least Concern.

Length and Weight: Growing up to 48 inches in length and up to 78 lbs. in weight the Permit fish is one of the biggest inshore fish in Florida on both coasts. An average sized fish is between 20-30 lbs. But 40-50 lb. fish are common around the Florida Keys in spring each year pre-spawning time.

Range and Distribution: Florida – both coasts. The extent of their range is from Massachusetts down to Brazil and out to the Virgin Islands. The range is large enough and they are not as targeted for consumption by commercial fishing industry as by recreational anglers who prize it as one of the most fun fish to catch.

Habitat: This pelagic saltwater fish is found singly and in small schools in shallow water from 2 feet deep to around 36 meters deep typically. They spend a lot of time in very shallow water over sand flats, reefs, grass, or rocks where they search for crabs and other crustaceans.

Permit will change the areas they are feeding often for crabs.

Why Should You Go Permit Fishing?

If there’s another harder fighting big fish in the shallows that is MORE fun to catch than a big Permit, I don’t know what it is! Permit can be sight-fished from a boat or even the shore or a bridge or pier and targeted by dropping crabs down to the bottom to be devoured instantly.

People target permit in Florida for the challenge of finding them, presenting the bait (crabs or shrimp), and fighting a hard-fighting fish on rod and reel.

Permit fishing is a blast and something that you’re going to quickly become addicted to once you find them.

Some anglers are so dissatisfied with other inshore fish that they only target big permit! Indeed quite a few fishing charters will be targeting this amazing fish this year. It is highly requested and it isn’t just for the flesh which is good to eat (despite what people say!).

So, WHY Fish for Permit? Pound for pound they are probably the strongest and most exciting big fish to catch in the shallows in Florida. I forgot to mention, they’re an absolute riot on a kayak because they’ll tow you around until they’re ready to give up and let you land them.

Super-fun to catch and not at all bad to eat. THAT’s WHY!

Where To Find Permit to Catch?

In Florida, the best place to go is the Florida Keys (islands south of Miami) in early spring before spawning. There are many large 40+ pound fish that are hungry for crabs.

Most people target Permit during this opportune time. They are not only in the Keys, but close by to south of Miami is a great time for fishing Permit.

Crustaceans are their primary target for feeding. Blue crabs, calico crabs, shrimp, mollusks… and just about any crab will work for catching Permit. The problem is, crabs are expensive and time consuming to catch yourself.

Few bait shops have them and it might take some research to find out where to source some.

Some anglers catch Permit on baitfish, but crabs are much better bait if you can find them!

Which Fish target Permit as Prey?

Sharks, dolphins, and barracuda will target Permit as prey. Of course, when they are young they become food for a wider variety of larger fish.

How To Catch Them?

With live bait it’s a matter of dropping as large a crab (up to 2 inches or so wide) as you have near the school or individual fish on the bottom and wait for the strike. They can’t resist crabs, and one walking around on the bottom at the end of your line is going to get hit hard. The trick is whether your hook finds the mouth or not.

Permit have hard mouths that chew shells, sand, and hard barnacles. They don’t really notice your hook and can chew it and swallow it. Circle hooks are best.

The fight will last 20-30 minutes and be filled with short strong runs where the fish takes back a lot of line. Be patient. Some anglers say 1 minute per 1 pound of fish is how long the fight will last!

The best rig is literally no rig. You need a good sized crab about 1.5 inches across the shell wide. Use a circle hook (offered below in gear section) on 30-50 lb. test fluorocarbon line and braided main line from 40 lb. test or stronger.

Hook the crab from underneath in the soft shell area on the edge of the shell. Coming straight through the shell will kill the crab quickly and you want it to stay alive and moving around for as long as possible.

I just watched a guy do it completely wrong on a video. He wasn’t even rubbing the point into the shell… just the bended part!

In slow water conditions no weight is needed. It’s much better just to free-line the crab so it moves naturally. The hook through the shell is enough to slow it down and make it an easy target for Permit.

In the Florida Keys from March to October is probably the best time to fish for these big fish.

I love the Ugly Stiks for just about any sort of fishing. One with Medium-Heavy action works well for these silver sluggers. Remember, you don’t need a $300 rod and reel combination to catch Permit, or any other inshore fish.

You might have a 5000 level reel on a medium action rod and decide to go see if you can catch one. Why not try? You might learn that you need heavier gear, but at least you learned directly, you don’t need to take my recommendation for every fish in these guides.

The rods at Amazon are constantly out of supply and that’s a bad experience, I know. Still, there’s the off-chance that you’ll get one. Shop below and see if they’re in stock. I love these rods.

Try something and see if it works, if so, you’re good. If not, level-up and try again!

I’d start with a 5000 level spinning reel or 30+ level Penn baitcasting reel to catch Permit. The problem is they have a wide range of sizes from 10 lbs. to 30+ lb. fish. They fight hard and broken or inadequate gear is a common problem for new anglers who don’t know what gear is ‘enough.‘

These 2 Reels are Excellent. The first is for beginners (cheaper). The second is if you want a reel that is going to last for many years.

50 lb. Fluorocarbon leader you can get here

Strong circle hooks are best for Permit fishing in Florida. The fish are heavy to begin with but then they are very hard fighters and inferior hooks will snap off or bend and you’ll be left holding a slack line. Not fun!

Use any of the hooks below. These have high quality inspections and are the only brands I trust for hooks.

The all-tackle world record for this fish was caught in the country of Brazil in South America. The big 60 lb. 0 oz. (27.21 kg) Permit was caught by Mr. Renato Fiedler in the area of Ilha do Mel, Paranagua, Brazil on the 14th of December 2002.

Renato fished with a small-medium sized baitcasting reel and Medium weight rod of 7 feet in length. It took 25 minutes to reel in this world record. He caught it on an artificial lure – the Twin Tail Shrimp on a 3.5 oz. jig head.

I cannot find this Twin-tail Lure anywhere on Amazon but if you image search it you can find some other resources for it. Not sure I’d trust them, but it’s only $12 if you want to risk it.

The all-tackle Florida Permit record is very close to the 60 lb. world record from Brazil.

On June 30, 1997 Mr. Thomas Sebestyen was fishing near Fort Lauderdale, Florida when he landed the all-tackle Florida record Permit fish which registered 56.13 lbs. on the scale.

All Over Florida (Not in the Special Permit Zone – covered next)

Minimum Length (Slot Limit) â€“ Not less than 11″ or more than 22″ fork length. Each angler may possess one fish over 22″ included in the per person bag limit.

Season â€“ Open year-round in most areas of Florida – read more below.

Vessel Limit â€“ No more than 2 Permit fish per vessel

Season â€“ Closed in this zone from April 1-July 31

Here is our page covering Florida Fishing Licenses. There is no special Permit fishing permit required to harvest these fish but please pay close attention to the regulations above.

How to Cook Them?

There is some trickery as to how to filet this fish. There is a lot of meat in the head area that most people miss. I never miss anything because once I gut and scale a fish and cut off the fins, I throw the entire fish in the oven to broil it.

It tastes fantastic like that and I don’t miss any meat. Besides, my friends like to eat the eyeballs. I can’t force myself to do something like that, but I guess you should try it if the idea is exciting to you.

Here’s a video about how to fillet and cook Permit fish. Some people say they’re not great eating, but they are much the same as a Crevalle Jack – which I like a lot.

You just have to stay away from the dark line and the fat. I avoid all that and I like eating Jack and I’d eat Permit too.

Check out the video – he catches a few on light-medium tackle and then takes one home to cook up for his mom.

This is a gamefish you’ll be targeting a lot once you catch one or see some big ones schooling or feeding on the flats. They can be found in a surprising number of places, you should just be aware of their tails on the top water as they feed. It doesn’t always mean redfish