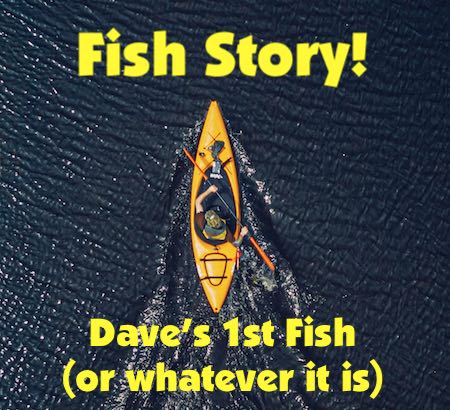 I was living in Tampa for about four years when I first met Dave C. at a job. We were working for a company building psychological testing and assessment software.

One of the managers had worked for the CIA for most of his life and had an odd twitch. He was usually to be found staring blankly at someone until confronted with it and then he moved on.

I was answering phones doing tech support for the products. This was back in the early 2000’s so there were plenty of problems with software at the time and my job wasn’t very fun walking people through the most mundane things up to nine times in a row because they just couldn’t grasp the simplest instructions!

Anyway, Dave was programming in Delphi, a programming language older than the Sun. I met him in the break room and we hit it off immediately. He’d been in Tampa about the same amount of time.

To cut it short and begin our fishing story, we’d head out to a club most weekends and have a good time chatting up the local honeys.

Now, Dave had never been fishing maybe in his LIFE. When I brought up the topic he was immediately interested, but cautious.

He had never even CONSIDERED fishing in Florida as something to do with his free time. Tennis, reading books, going to concerts and movies… that was Dave’s life.

And there I was with a couple of beers in me telling him about my crazy fishing trips out on the kayak. Shark stories. The big one that got away, you know the kind I’m talking about. 😛

The alcohol was probably acting on him as well because he slurred something like he’d like to go on one of these trips, but he didn’t have a kayak.

Well I didn’t let that one get away and the next weekend bright and early we were on kayaks floating around the bridges and docks of Clearwater and looking for big fish.

Kayak rental shops abound and Dave hadn’t a clue it would be so easy to hook him up with a yak and gear. I think he paid $30 for the entire day.

We floated around and I caught fish and tried to tell Dave what to do to catch fish and he just wasn’t catching anything. It was like he had a curse on him he couldn’t shake off.

We’d been out for almost 3 hours and he thought he had bites, but he had nothing to show for it.

He went through three dozen shrimp faster than anyone I’d ever seen. There must have been many schools of fish under his kayak because when he wasn’t having his hook stripped of shrimp he was dropping them in the water so often I thought maybe he was doing it ON PURPOSE!

I thought maybe he just wanted to go home and then that’s when the story gets better.

Dave had FISH ON. I had set him up with some strong Gamakatsu hooks, I think it was a 1/0 he was using at the time. Sinker about 2 feet from the shrimp.

His reel had 40 lb. test, all braided and his reel was screaming as he tried desperately to do something to bring the fish in.

I was excited for him, to be honest. I didn’t know what he had on because I couldn’t grab the rod and feel the pull, but it looked to be strong and steady. Did he maybe have a big cobia? A big jack?

The beast pulled poor dave around the docks, into the docks, and into docked boats for a good forty minutes. I untangled him from around dock supports twice and fixed a bird nested reel once and almost lost the fish!

Finally I got smart and took the rear end of his kayak and tied a rope to the carabiner that was there so the huge fish had to pull both of us around and would maybe tire out before dark.

Now at least I could keep us away from banging boats and docks. We did this for another twenty minutes and finally I think Dave was gaining some line on it. As he got it close to the kayak he screamed out, “WHAT THE EF IS THAT?”

I figured he either had hooked a whale or a shark. But, wouldn’t he know what both of those looked like?

I couldn’t see what he was looking at because the fish was on the other side of his kayak than I was.

The thing immediately submerged upon seeing Dave and he fought to regain line for another ten minutes.

I was on the verge of grabbing his rod and forcing the fish to the top and boating it but of course I wanted him to have the thrill of it. Him not knowing what it was when it got close to the boat kind of stumped me.

Then I saw it too.

It was a MASSIVE STINGRAY. It was easily 3 feet across with a tail full of stingray barbs that could rip into your flesh with just a twitch. That explained it!

Rays have a lot of strength and they can fight a long time. I’d never caught a ray that big, or even seen one that big outside of an aquarium.

We started heading toward the shore because I didn’t want him to get a tail across the face as he tried to pull the hook out.

I pulled him and the ray over to a small patch of sand and pulled that pig up onto the beach. It was gigantic. The venomous spines on the tail were huge and gave me horrible flashbacks to when I’d stepped on a barb not too far from where we were.

It must have weighed 30-40 lbs. More? It was just pure muscle, you know how rays are.

Dave was gasping for air when we pulled it up on the beach. He didn’t even know we had rays in the water here he said. Ha! He was such a noob.

The hook was kind of deep and it took pliers to get it out. Then I didn’t know how to launch it back into the water. I asked Dave to bring both paddles and we used them to flip it upside down into the water. It glided off really fast like it STILL had energy. I’ve no idea how they fight so hard.

Anyway, Dave had the best time that day he said. He was often begging me to get back out there and we started heading out on the water a lot.

I had him fish topwater for the most part so we didn’t catch anymore rays. I don’t enjoy catching them. Most people don’t.

He never bought a kayak, but his rental fees increased over a year and eventually he stopped fishing. He had caught trout, pompano, jacks, flounder, reds, black drum, and more ladyfish than a man has a right to. Still, it just wasn’t something that set him on fire like it does me and probably you.

If you have a fishing story, send it in and I’ll probably publish it! I love to read ’em and a lot of people do.