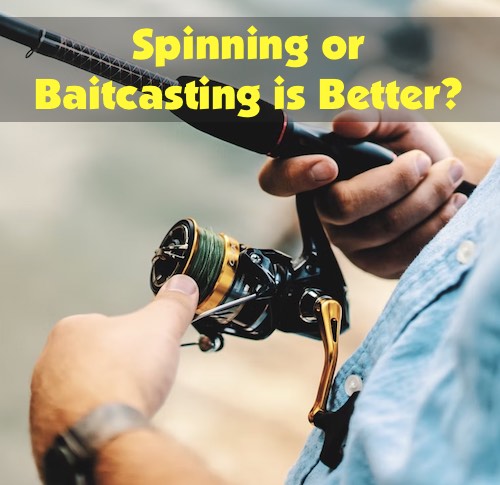 One of the most common questions any of us get who have fishing websites or YT channels is, “Which is better – baitcasting or spinning reels?”

Answer: Baitcasting reels are great for casting accuracy and distance and spinning reels are best when using light tackle for smaller fish.

That’s the short and sweet answer. Let’s dive into the complexities of the question and see what all we can compare between the two reel and rod setups so you can make the best decision for your type of fishing. Let’s go!

Which Is Easier to Learn? Using Baitcasting or Spinning Reels?

Spinning reels are put on almost all kids fishing rods for a reason. They’re easier to learn how to cast them and catch fish with them. There is a short learning curve that can be mastered in a very short time by any motivated child.

Baitcasting reels are a little trickier to use at first because they give you more control. So, there’s more for you to do to keep the reel happy and not ending up fouled in a bird-nest mess that takes you an hour to resolve. By the way, if you ever bird-nest a reel good, just cut all the line off with a sharp knife and start over. Really, it’s so much easier

Which System Is Best for Your Type of Fishing?

Let me first say that you can use a bamboo pole with some line and a hook and shrimp to catch all kinds of fish. You’ll miss some due to the inflexibility of the rod and not being able to cast very far, or use the drag, but you’d be surprised what you can catch with a simple setup like that.

If you are severely income challenged at the moment with COVID or anything else, don’t spend a lot of money on either system. If you just want to put food on the table, go get the cheapest setup you can find, the most flexible one and go catch fish. Small fish.

To do this, you should probably get a Spinning Reel and Rod combination. Spinning reels are fairly simple and easy to learn. They are pretty durable and it’s kind of hard to destroy one in the first year of use – even if it is a cheap one!

After using the spinning reel set up for a while you might start wishing you had more control over casting. You may want to put your bait in a very small spot and you’re having trouble casting accurately enough. Or maybe you fish from a pier and you need more distance on your casts. Both of these situations call for a baitcaster.

Don’t be afraid to change systems, you’ll learn it well enough in a matter of minutes and then after you spool the line a few times (bird-nest), you’ll figure out that constant tension is key to keeping your spool happy. You’ll LOVE the new system. I certainly did, and everyone I know who switched loves it too.

Which Reel Brands Are Best? (Most Durable)

Though we can’t always say that a well-known brand name means the company produces great fishing reels, I have always gone with brand names when buying my fishing products unless we’re talking about artificial lures. I buy anyone’s artificials for the most part.

For reels I stick with PENN as my first choice. I’m from Pennsylvania so that is probably due to my brainwashing. I do love their reels though! I also like Abu Garcia, Shimano, and Daiwa. These are probably the top names in consumer fishing reels, and I’ve just never gone outside of this group for my fishing gear.

An older fishing gear company that I used as a teen is Shakespeare. They probably still make good products.

Are there good Chinese made fishing reels and rods? Probably. I’m sure there are. If you know of one and want to tell me about it, please do. I’m always open to learning something new.

Which Reels and Rods Costs Less?

It used to be you could say absolutely that the spinning reels and rods cost less money but now there are some very affordable (cheap) baitcasting reels as well, so that goes out the window. Neither is cheaper.

Unless you’re talking about Deep Sea Fishing. Then your spinning reels are cheaper because they’re really not used for deep sea fishing or trolling much. Baitcasting reels are better for big fish and big tackle. It’s because of their design being stronger and better suited to fishing from a boat. Those systems are extremely expensive. Now there are even electric trolling reels that cost around $1,000 each!

Both systems are about the same cost for the same quality, so this shouldn’t have an influence in your choosing a rod.

Which Reel Is More Popular?

Below is a graph showing the interest in Baitcasting Reels and Spinning Reels over the last 18 years. There’s a clear trend toward spinning reels being more popular as more new anglers get involved in the hobby. Spinning outfits are just easier to use and more flexible – you can use them anywhere. Baitcasting reels are also gaining traction, but much more slowly.

Is There Any Difference in Baitcasting Rods vs Spinning Rods?

The eyelets are bigger on the spinning rods to match the wide loops of line the spinning rod throws off during casting. If you pair a baitcasting rod with small eyelets with a spinning rod, you won’t be able to cast far at all. You’ll immediately know something is wrong. Look at the first (biggest) eyelet nearest the reel to help you decide which system the rod is designed for. Often there will be writing on the rod to tell you, but it isn’t hard to figure out once you see a bunch of rods intermixed side-by-side.

There is no difference in strength, length, rigidity, or anything else except the mounting area in the rod grip where the reel attaches. Baitcasting rods have a little finger grip on the rod by the reel that helps when casting.

Here’s the best video I could find about using a baitcasting reel. Keep in mind that when he’s saying ‘feathering’ – he means your thumb on the line… just lightly touching it as the spool rotates and lets out line during the cast. You’re keeping tension so the line doesn’t unravel and ‘bird-nest’.

How to CAST a Baitcaster for Beginners

Here’s the best video I could find on using a spinning reel.

How to Cast a Spinning Reel/Rod - For Beginners
Previous
Next