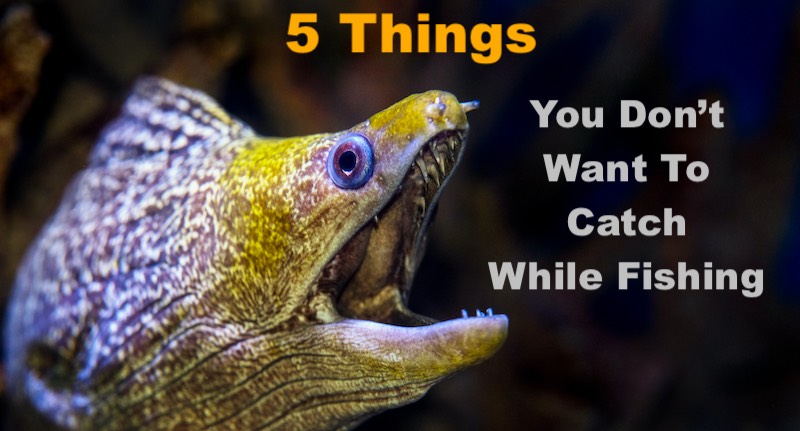 Fishing isn’t usually thought of as dangerous, but as we saw in our last post, 5 Fish That Can Hurt You, there are some things you should be aware of!

In this list below, there are 4 things that you definitely don’t want to catch on a hook as you’re fishing. One you may not even be able to see! Then, there is one of these that could actually CATCH YOU.

And, you don’t want that either.

Anyway, enough mystery, right? Let’s check out this list and become safer anglers on the water.

5 Dangerous Things You Don’t Want to Catch While Fishing

Me and my Air Force buddy Scott would go out to this place on base and fish the ocean about once a month. It was super shallow. We used frozen squid usually and it was a great time to chat and drink beer, but not a great time for fishing.

Then, to make things interesting we made a bet. A case of beer to the guy who catches the first fish.

Well, it took months (really), but then finally I had a good bite and was reeling something in. Scott was trying to cut my line so I couldn’t win the bet but I reeled fast and ran away from him to land the fish.

It wasn’t a fish.

It was a white eel. It was about a foot long.

Anyway, eels have ridiculously sharp teeth. I met a guy in Phuket, Thailand who I was showing some venomous snakes on a field trip and he had a weird thumb. He noticed me staring and showed me. A moray eel ripped off his thumb and ate it. He’d put it too close to a hole in the coral.

Eels are bad news. To top it off – they’re SLIMY. Slimeballs rolling around your line and hook. Don’t do anything crazy and try to unwrap it to dislodge the hook. Just cut the line close to the hook as possible and flop it back into the water.

Did you read my Story about Eel Spearfishing yet?

Stingrays are those flat wavy-looking things that have two eyes on the top of their head.

They glide through the water as if they are eagles floating on the wind. You don’t have to worry about the mouth, it’s on the bottom of the body. I have never heard of anyone being bitten by a stingray.

What you do have to pay close attention to is where that tail is.

On the tail is a venomous barb that can puncture right through thin shoes.

As you are reeling in a stingray on a fishing line whatever you do, don’t get into the water with the stingray. Drag it up onto the beach onto the sand.

They are basically helpless there on the beach and they don’t move around much. I have never seen a stingray flip the tail while laying on the hard sand. At least not enough that it could puncture somebody.

OK, I have another story. about stingrays. This isn’t supposed to be a post linking to all my stories, but now that I look at this list, I have another one after this that I have a story about too!

The pain of a stingray envenomation is something you never want to experience. Here’s my story about stingray pain.

I’ve caught snakes a couple of times while fishing freshwater, but never in saltwater.

The saltwater snakes are so much more dangerous than those caught in freshwater but either way, you’re in for a medical emergency if bitten by one of the bad ones.

In the ocean, nearly all snakes have venom. It slows their meal down once they bite and they can follow and eat it at their leisure.

Around lakes, rivers, and streams in Florida, you can find water moccasins and rattlesnakes.

Rattlesnakes are not swimmers (much) but you could step too close to one and find out what they’re all about while fishing at your favorite stream.

Water moccasins will grab your bait or your caught fish underwater and hang on until you reel it up! You may drop it in your boat or at your feet. Not exactly ideal.

I have a story about this, as you probably guessed! I was a Big Brother for a couple of young kids who’d been abused. I took them fishing a lot. I took the 8-year-old boy to a great fishing spot at a stream I knew. Turned out a bit scary. Here’s that snake story.

Remember I said that one of these things can GET YOU? That’s this one.

Alligators are EVERYWHERE in Florida. They need freshwater, so if there’s a lake around, there are almost surely some alligators around. There may be alligators in the lake at your apartment complex. They roam around and change swimming holes sometimes so one may show up unexpectedly. Happens all the time.

I let my little chihuahua out to do his business one time at around midnight. I was in an apartment with some ponds around that held gators, but they were around 100 yards away. When “Mango” didn’t come back after 5 minutes, I went looking. I looked everywhere. Something got him. Either an owl or a gator is my guess.

There are alligator attacks every year in Florida. Just be aware of them. They don’t usually stalk anyone, but if you happen to be standing next to a hungry one, they might see you as dinner.

It’s true. Though you may see an entire jellyfish or man-o-war you snagged with your hook while fishing, you may not see dangerous tentacles from either of these hanging on your hook or from your bait.

You may just grab it to pull it off, thinking it’s plastic or something, and then feel the pain of the stinging tentacles.

Apparently, I sat right on one after spearfishing, never seeing a thing.

If you do get a sting, soak in very warm water for ten minutes at a time and eventually, the pain will stop. I didn’t know this when this horrible thing happened to me (last story!)

There’s some evil stuff lurking in and around the water as you’re fishing. Scout the area before fishing in freshwater to make sure there are no obvious snakes or alligators around. Don’t stand too close to the shore of a lake. Don’t bring your dog fishing at lakes!

Knowing what is possible is a good start to keeping you safer on the water or wherever you’re fishing.

Here are some other articles that may help you stay safer while fishing.