Do Kayaks Get Hit by Lightning in Florida? 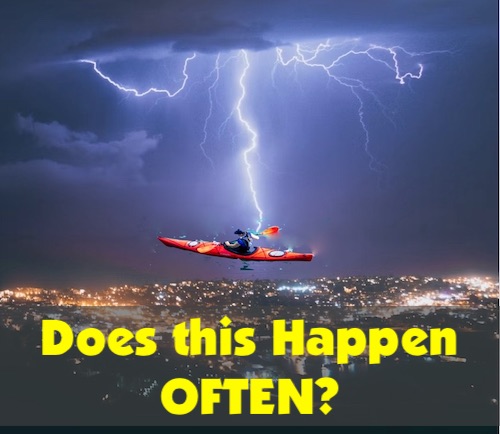 Living in Tampa, Florida for over a decade I learned to adjust to the idea of lightning hitting all around me because there’s little you can do about it.

Kayaks are not hit often by lightning but it is something to be aware of and take precautions. It only takes one time for lightning to ruin your Florida fishing trip!

At the bottom of this page is a video showing a kayak fisherman who had lightning strike next to him as he came out of the water. This could be any of us.

I’ve certainly gone out on the water when I knew storms would be coming later that day.

How Often Does Lightning Strike Kayaks?

It’s hard to come by data for lightning strikes in Florida if they resulted in no deaths. We do know that there were ZERO deaths on the water due to lightning striking boats on the Florida Coast in 2021.

However, MOST deaths in Florida occur to people fishing or enjoying the beach and water (John Jensenius, National Lightning Safety Council (NLSA))

Florida has more lightning strike deaths than any other state, consistently.

Near Lightning Strikes While Kayak Fishing

While living in Tampa and kayak fishing around Tampa Bay and off the coast of Clearwater, Bradenton, Sarasota, and St. Petersburg I had two close calls, one of which I’ll mention here.

All the other times I was able to see the storm coming and judge when it would arrive and get to shore and shelter in time.

My Experience – Red Sky in the Morning is a Sailor’s Warning!

I loaded up the Perception Illusion kayak the night before, trusting the neighborhood delinquents would be too liquored up to steal my yak off the roof of my Honda Prelude.

I had this little movement alarm that I stuck up inside the hull as well so that was enough for me to sleep soundly.

I woke up to red skies, beautiful red skies and the saying came to mind. The weather reports said nothing but clear skies so I ignored the situation looking me in the face and raced down to Fort DeSoto Park and launched the fishing kayak by 6:30 am.

By then I could see that some of those beautiful red clouds had turned dark.

I should have got off the water then but instead I paddled way out to a place I’d caught a boatload of big Gator Trout a few weeks before. It wasn’t long before the first lightning strike hit the water maybe 50 yards away.

Chills ran through me though it was easily 90°F.

How had I been so stupid? Now I may die for being stupid! It was like natural selection playing out right there on the open water.

I was sure I was going to die. I had about 1/4 mile to paddle. I raced to reach a piece of land and ran up under a restroom roof about 200 yards away and watched a very intense lightning storm hitting the water every few minutes for an hour.

What To Do If Kayaking in a Storm?

Precautions Kayakers Can Take to Stay Safer from Lightning Strikes

Can Fishing Be Dangerous in Florida? Find out! >

Do you have a story about almost turning to toast during a lighting storm while fishing? Send it to me and I’ll publish it here!