What’s a Lionfish (Lion Fish), and Why Should You Kill It? 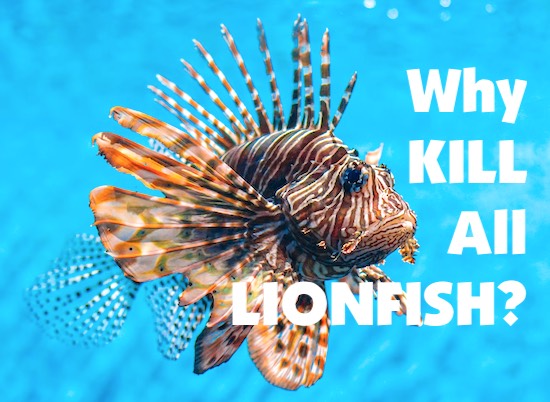 Lionfish are a venomous fish and invasive species to Florida and other southern and eastern states. They reproduce in huge numbers and they are wreaking havoc on smaller reef fish they prey on and predator fish they displace.

They have upset the delicate balance of fish in the reef because this fish is not native to Florida.

Lionfish are native to Indonesia, Malaysia, Thailand, Australia, and neighboring countries in the Indo-Pacific region. They were accidentally introduced here in Florida and the Caribbean.

Some other common names for it are – scorpion fish, nohu, zebrafish, turkeyfish, butterfly cod, ornate butterfly-cod, peacock lionfish, and the warty ghoul.

Another fish in the same genus is the STONEFISH. This is the world’s most deadly venomous fish and we have them in Florida. Your complete Stonefish Guide is here.

Why Is It Called a Lionfish?

Well, the long venomous spines come out from the body and neck of the fish in a shape resembling the heavy mane of a terrestrial lion like from Africa. The name comes from this resemblance.

What Is the Problem with Lionfish?

The problem is they have moved into reefs as a top predator and eat 70 different species of fish as well as invertebrates and mollusks like octopus, crabs, shrimp, small lobsters, squid, and many more marine species.

They eat many thousands of fish each year. They are competing directly with snapper and grouper species.

They have no real natural enemy that prefers to prey on them for food because they’re surrounded by 18 venomous spines and once a predator gets stung it usually doesn’t continue predation, as you might imagine!

Still, some predators do occasionally eat them. They have been found in the stomachs of two grouper species and moray eels, Bobbit worms, and blue-spotted cornetfish have been seen predating on lionfish.

The fact that they’re venomous is not that big of a deal. We have many venomous creatures as part of our marine life in Florida. Their venomous spines are used only in self-defense and to be honest, it’s child’s play to spear them with a hand spear.

These fish are always under 20 inches in length and covered with spines in their fins. They have brownish red and white markings that are beautiful.

What Is the Average Lifespan of a Lion Fish?

The average time it lives is 10-15 years! They can reproduce at 1 year old. Females are capable of producing 2 million eggs each year.

How Do Lionfish Affect Marine Ecology in Florida?

As more lion fish are born and invade more areas of reef once the domain of two of our most loved gamefish, snapper and grouper and other higher-level species, they become a direct threat to these species.

This affects Florida fishing and ultimately you and me both.

Lionfish are dramatically disrupting our marine ecosystems and causing decline in the density of fish in coral reef habitat.

How Fast Do Lionfish Reproduce?

Another problem is that they reproduce monthly, laying 30,000 eggs a month and more during warmer months. Once fertilized, the little lionfish larvae hatch within only 36 hours!

They remain in larval stage for about one month and have rapid growth during all early stages. Small lionfish are called fry.

How Big Do Lionfish Grow?

The adult red lionfish are about 18.5 inches long. The devil firefish averages about 14 inches.

This pervasive species has now spread to the western Atlantic (east coast of the USA) and the northern Gulf of Mexico where they have established considerable populations.

Where Are they Found?

The U.S. Geological Survey maps instances of the fish found all over the US and other close countries. Look at the image below. Each brown diamond represents many lion fish found in this location.

What Happens If You Are Stung by a Lionfish?

Most stings from these fish are to careless fishermen, divers, and snorkelers. Occasionally a swimmer is also stung by one that isn’t seen. These fish tend to remain toward the bottom of the water near reefs.

The venom from the lionfish barbs is highly toxic and causes intense burning pain immediately. You’ll know when you’re stung by one!

Similar to the sting from jellyfish species you may have headaches, nausea, vomiting, paralysis, convulsions, trouble breathing, heart arrhythmia, and other symptoms like redness and swelling around the site of the entry of the venomous barb(s).

Though some people have died from stings, you almost surely will NOT die from a sting, but you’ll remember it the rest of your life.

Seek medical help immediately after a bite because people react differently and you may need life support to get through it.

How Do You Treat and Cure a Lionfish Sting?

Hot water is a simple and effective means to treat lionfish stings. Immerse the punctured area in very warm water (but not scolding hot) of about 113°F (45°C). You shouldn’t require treatment for hot water burns afterward, but you want it about as hot as you can stand.

Within 90 minutes of warm/hot water immersion the venom in your body will break down and not cause as much pain or other symptoms.

You may need to repeat hot water treatments over and over for a couple of days as pain resurfaces.

Most victims stung in this study (PDF) were relieved of nearly all symptoms within 72 hours using this hot water treatment.

What Can We Do About the Lionfish Problem?

Fishing authorities encourage divers and snorkelers to kill lion fish when we see them. Some people have taken to doing weekly lionfish purging in their favorite areas for fishing.

Some groups have created contests with prizes for people killing the most of these fish during a contest.

The problem really is that bad, and anything you can do to help will help our fragile ecosystem. We’ll never get rid of all the invasive lionfish but we can do our part to help limit their numbers as they are ultimately affecting our treasured fisheries!

It actually comes from Florida. The 48.8 centimeter (19.2 inches) long fish was shot by Michael Randle with a simple spear.

That depends… are you really careful? Lion fish basically hover around in one spot and look amazing. Let’s be honest, they are fascinating to study.

Their morphology is so different from anything we typically see in the ocean or in a fish tank. Many people keep them at home.

Over a 2 year period, 33 cases of accidental (aquarium pet) red lionfish envenomation (stinging) were called in to a Chicago emergency hotline.

Of those, all victims recovered with only 2 people requiring hospitalization. (same study linked to above)

Can Humans Eat Lionfish? Are they Good to Eat?

If there’s one good takeaway from this invasive species takeover, it’s that yes, humans can eat lionfish and they are very good to eat. They’re delicious really.

I’ve had it about five times and I’ve always enjoyed it on a plate and in my sandwiches with Swiss cheese, tomatoes, onions, and a light honey sauce.

Cut the spines off with tough scissors. Fillet the fish. Simmer in butter, hard fry, broil, whatever! The flesh is very white and similar to hogfish.

To clean these fish properly and avoid the venom in the spines, watch this video:

[Featured image at top from Unsplsh]

Read About Stonefish, the world’s most venomous fish (and we have them in Florida) here >