As an Amazon associate I earn from qualifying purchases. 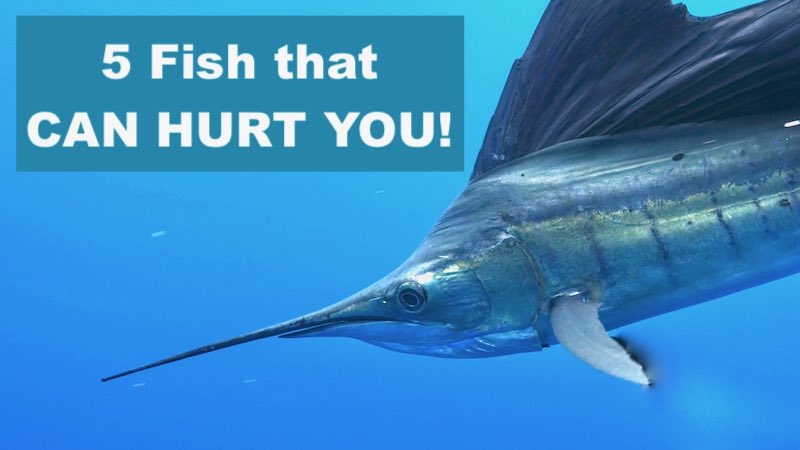 When you’re fishing, you’re probably not thinking about becoming a victim of something. Lightning is probably your biggest threat, but there are other things you should be aware of. Sharks of course can harm you, and everyone knows that so I won’t mention them here.

But what about dangerous FISH? Can any of them hurt you while your’e fishing? On a boat? On a pier? From shore?

5 Fish that Can Hurt You While You Are Fishing

If you’ve never seen the videos on YouTube of people with various parts of their bodies skewered with marlin or other swordfish bills, you’re just not paying close enough attention! These things are killers – they have killed people who were just trying to catch a little dinner.

The problem is when they get close to the boat and see people are attached to the fishing line that was dragging them around for the past hour, they lose their little fish minds and launch themselves into the air like cruise missiles.

Sometimes they’re aiming for you.

I’m being dramatic about this, but billfish are a real threat. Anglers trying to land swordfish are constantly getting stabbed, scraped, and punctured. Some require hospitalization.

Did you hear about the 73 year old woman standing on a boat with two guys fishing off Stuart, Florida?

Katherine Perkins of Arnold, Maryland was at the center console. One of the guys hooked a 100 lb. sailfish. It got close to the boat, flipped out, and jumped into the boat, spearing the woman in the groin. They put pressure on the wound and got to shore quickly, but she nearly died from it.

Catching a swordfish in a kayak is pure lunacy and should be reserved only for people who have seen others do it and who know exactly how these fish must be handled for safety.

Even so, nobody can tell you how to avoid a fish flying through the air and stabbing you.

The Swordfish is Florida’s State Fish. There are many of them in the deep sea. Treat them with the respect they deserve and live another day to tell about it.

Tarpon are some of the funnest fish to catch and sure, I’d catch one in a kayak. I mean, at least there’s no spear on the front of it’s head.

Tarpon, just like billfish, can jump out of the water and knock someone off a boat or down into the hard boat. It happens every year. Just like marlins and sailfish, a hooked tarpon is a bit of a loose cannon.

They go a little crazy as they realize something is about to grab them from the boat. They pull away, strip off some line and then are airborne and knocking someone off their feet in the boat.

The biggest tarpon in Florida was 243 lb. That giant fish could probably knock you out of your own boat without jumping through the air. Just pull it up on the boat and let it flip around a few times, it may send you sailing over the side.

Keep tarpon in the water to release them. Don’t stress them out trying to pull it up on your boat for photos. Take your photos in the water. We’ll get the idea, it’s a big fish. Now let it go!

They’re no good to eat and illegal to harvest in Florida.

Florida has some TOOTHY FISHES. The fish named above all have razor sharp teeth and the fishing reports are loaded with instances of people slicing their hands open on their sharp teeth. Other fish include Spanish mackerel, tilefish, and sheepshead. Many reef fish have bone crushing teeth.

Not mentioned, but Snook have sharp gill plates that can cut you too. Catfish have a strong venomous barb that hurts like he** when you get one in the finger!

Be careful with all fish. Not just for your own safety, but for the fish’s survival too. When I watch YT videos of people handling fish I always cringe. Even “pros”. These YouTubers don’t know what in the world they’re doing. Here is how to properly handle fish.

Snorkeling in Hanauma Bay on Oahu, Hawaii one time with my Air Force buddies. We’ve got bags of frozen peas. We’re spreading them out in the water and the fish are ravenous.

My dumb friend ‘Wally’ holds one pea between his thumb and pointer finger while a big fish comes to get it.

WHAM! It bites his finger as it takes the pea! He’s bleeding all over and screaming under water. He needed a couple of stitches, but at least he didn’t lose his entire finger.

These small fish (always under 20 inches) are quite dangerous because all it takes is a poke by one venomous barb and you’re going to be in some real pain. Some people have more severe symptoms after Lionfish envenomation.

These are an invasive species from Indonesia and southeast Asia. They can be eaten, so that’s the good news but be very careful around them. They are easy to spearfish for dinner and the state of Florida would love you to kill as many as possible.

Lionfish eat 70 other species of fish and they are not welcome in Florida. Do your part when you see them to harvest them. Know what they look like and what you need to do to avoid them, and how to handle them safely if you’re going to cook them.

If there’s one fish you really don’t want to step on or pick up, it’s this one. Stonefish have a very strong toxin that is injected with their strong barbs, usually when someone steps on one.

Stonefish lay around the bottom and don’t move much. They are very well camouflaged and inject the venom in direct proportion to how hard they are stepped on.

ALWAYS wear barb-proof reef shoes when snorkeling or diving and never pick up any fish that you don’t know.

These aren’t the only fish in the ocean that can hurt you. Of course, we didn’t even mention sharks. There are 35 different species of sharks in Florida that you might catch by accident or on purpose. You should know how to release them safely.

There are also other animals in the ocean that can hurt you, we will have a post about that here.

Stay safe on the water and be prepared for crazy things to happen like getting knocked out of your boat. Make sure you practice getting onto your boat after being knocked off to make it easy when it does happen.

Fishing in a traditional boat is fairly safe but fishing in a fishing in a kayak or on a paddleboard is asking for trouble. I did it for a decade but I’m just saying that you should be very aware of accidents that can happen.

Be safe on the water and send me your fishing pics!