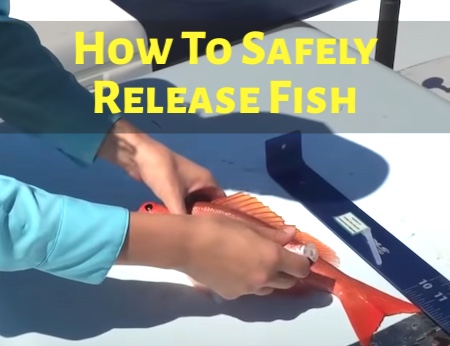 How to handle fish after they are caught is of real interest to me because I see SO MANY anglers doing it wrong. So-called ‘experts’ that routinely handle fish roughly really makes me sad at the state of our hobby sometimes.

If they don’t know how to treat fish humanely and preserve them after catching and letting go – how are you supposed to know?

How many of those released fish died? A lot. One out of every 100 fish? Probably more. One out of 20? Probably something like that. That’s 13.6 million fish that died because of improper handling.

Fish Are a Delicate Resource

The longer it takes you to pull a fish in and release it, the more it is wasting valuable energy resources and being stressed out.

Then, if you take the time to pick it up out of the water, roughly pull the hook (or worse, treble hooks) out of the fish, hold it with dry hands or let it flop around on the hot deck or concrete of the pier, you’re really doing a lot of damage to the fish. It all adds up.

Sharks are very common in Florida around piers and boats catching fish. When you let a fish go in weakened condition, it often becomes food for these toothy predators. Obviously, that’s less than ideal.

When you’re fishing, one of best rules you can go by is “Do No Harm.”

Don’t you think so?

You’re privileged to even be out there enjoying yourself and if you can’t do it in a way that does no harm to the fish, other wildlife, other people, then what good are you doing?

We should all be trying to preserve this amazing natural resource we have at our doorstep.

I read the other day that Florida has the best fishing in the WORLD. I think that’s probably right. Who else has regulated such an amazing fishery to the degree that the state has? We’ve got entire governing bodies that care a LOT about the fish and fishing and want to keep it going forever.

Problem is, we have so many people doing whatever the hell they want with total disregard to treating fish they catch with respect and CARE.

So many anglers these days seem to think their Instagram or YouTube accounts are more important than the fish they’re abusing and letting go to die in a few minutes, hours, or days because of improper handling.

So many anglers think they have to pull the 70 lb. fish out of the water to support the head and tail only so they can get that picture that will last a lifetime, and get more social media followers.

The picture is more important than the fish. They don’t give a thought to the stress on the fish as their mid-body sags under the weight they’ve never had to deal with before. Their body just isn’t built for it.

I think I’m working myself up into a serious rant here, so I’ll try to focus on the proper ways to handle fish without getting emotional about it with my writing. I am pissed off, but maybe I can get through this article? lol

Steps to Handling Fish Carefully to Sustain Life After Release