How to Take Kids Fishing in Florida for the First Time? (Full Guide) 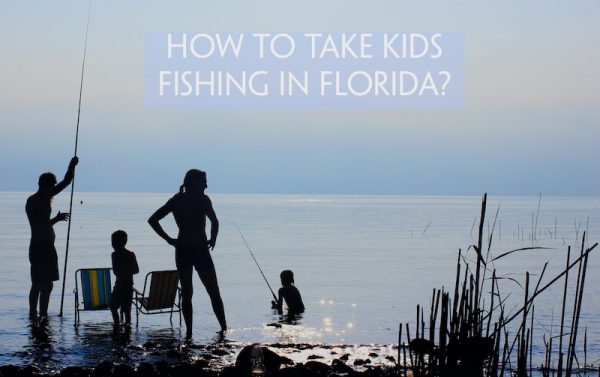 You’re visiting or living in Florida and you have some kids of your own running around the house, or you have visitors incoming from the north and you want to put them on some fish. You may be asking, “How Do I Take Kids Fishing for the First Time?”

I remember fondly as a child my first few times fishing in Pennsylvania as I was growing up. The first time was around 5 years old. I went with my uncle and his girlfriend in his Mustang.

This was about 1971, so the cars back then were powerful and of course he had a Hurst shifter and was trying to impress his girlfriend with how I couldn’t reach the money on the dashboard because every time he shifted, I’d fly backwards in the seat. Anyway, just to give you a feel for the era!

Keys to Taking Kids Fishing in Florida for the First Time

Best Freshwater Fish for Kids to Catch in Florida?

Black Crappie (Pomoxis nigromaculatus) are small, plentiful, fun-fighting fish that any kid can catch with ease in Florida freshwater.

For kids, beginning fishing by catching a small fish is fine. It provides all the excitement with less of the disappointment of broken line, snags, and even lost gear as a child may not hold onto the rod tightly enough to keep a catfish or some other larger fish from pulling it into the water. Or, the child may just be clumsy and lose his uncle’s new fishing rod in a stream after slipping on ice! (read story here).

For Florida crappie fishing for kids, just buy a simple rod and reel made for kids at any Walmart, or get one of our more reliable recommended rod/reel combinations below.

Choose from a black/red rod and reel or a pink set. Both come with 27-piece accessories like hooks, sinkers, bobbers, and lures.

Fishing for speckled perch in Florida freshwater ponds, lakes, and rivers is not too hard at all. You’ll need some lightweight fishing line like 4 lb. test. You’ll need some small pinch-on sinkers (lead weights) and some small hooks. You’ll also need to add a bobber (red/white) or other colored round floating bulb that goes under the water when a fish is biting or hooked. With crappie, no real hook set is necessary, so your child can just start cranking on the reel handle and reel the fish in.

There are many small fish that resemble crappie (speckled perch). Here are the others: bluegill, redear sunfish, (shellcracker), flier, longear sunfish, mud sunfish, shadow bass, spotted sunfish (stumpknocker), warmouth and redbreast sunfish. The Florida legal limit on this group of fish is 50 per day.

The legal limit for Black Crappie per day per angler is 25 crappie caught per day.

Best Saltwater Fish for Kids to Catch in Florida?

Pinfish (Lagodon Rhomboides) are found all over the beaches and even at some depth around Florida fishing piers. They are very easy to catch and can provide hours of entertainment for children and adults if you’re into them.

Taking kids to a saltwater fishing pier in Florida is probably a very good bet for some non-stop action that may even give you a surprise catch or two. I remember dropping my Sabiki rig over to catch some small pinfish as baitfish at the Sunshine Skyway Fishing Pier in St. Petersburg on Florida west coast and pulling up, of all things, a little seahorse! This happened a few times. Kids would go crazy if they caught one of those, right? I did, and I was a full-grown man!

If you’re trying to catch pinfish from a pier, or from the beach, just get some frozen shrimp at the store and put tiny pieces on a Sabiki Rig (you can get them here). Or, you don’t even need shrimp on them to catch fish, but adding very small shrimp bits ensures quick action.

When fishing for pinfish from a Florida pier, any rod will do, but you should use a very small diameter line if possible. Of course, if you’re using a Sabiki rig, they provide the thin line for you and it works great. Just tie it directly to whatever weight line you have, add some sinkers and sink it to the bottom and wait for the bites.

Sabiki rigs hook instantly, so please don’t try to set the hook or you’ll rip the hook through the soft mouth. Just reel up slowly when you notice the rod tip bending. Super-easy for kids!

The cool thing about a Sabiki rig is that you can catch two or more pinfish at the same time. It’s almost not fair. You’ll have to decide for yourself whether you want to use a multi-hook Sabiki rig to catch multiple fish at a time, or not. I can think of an argument against it, like it’s too much too soon. Maybe tie a very small hook on to one line and rod and a tiny piece of shrimp and let the child catch one fish at a time. Later on you can show them the craziness of catching two to six fish at a time with one drop over the side of the pier.

For the fishing rod, you could use the same one recommended above for freshwater crappie fishing, but saltwater fishing is tough on reels and rods. We recommend the following rod/reel for kids.

Once you have this rod and reel, you just need line – probably 15 lb. test line (below) and the Sabiki Rig recommended above.

I was eager to take my 3 year old fishing, so I got him his own little rod and reel and set him up with the Sabiki rig I can’t seem to stop talking about here.

We drove down from Tampa to the Sunshine Skyway fishing pier (north end) and set up some chairs, got a bucket of water for the fish (I also threw out some pinfish as bait for bigger fish while he caught the smaller ones).

I let him drop the rig over the railing and before even a minute was over, he had two little pinfish hooked and his eyes lit up like he couldn’t believe what was happening! We spent the next 2 hours catching pinfish and the occasional ladyfish and puffer that grabbed the small bits of shrimp we sometimes put on the small gold hooks.

There’s something magical about pier fishing. It’s the ultimate way, in my opinion, to introduce your child to learning how to fish. It’s fun, it’s easy, there’s a restroom and snacks. The SUV is parked right there beside you so you can bring whatever you want and take naps in it when it’s raining or you’re tired. It’s SO convenient.

If you want in-depth tips for Florida Pier Fishing – check out our full guide on it. You’ll learn how to fish from piers like a pro.

Take your child and friends fishing. It will be awesome, even if it isn’t. Kids love seeing new things, and even just seeing the birds, the pelicans, the fish in the water, and fish that other people are catching around you is enough for them to have a successful day.

Use the tips above to catch some pinfish or crappie and you’ll have sown the seeds of excitement about fishing for a lifetime.

I remember all the fishing trips I had as a child, and though some of them were awful, like my brother almost drowning in the trout stream, most of them were the best thing I’d every done up until that point.

Fishing for kids is not only fun, but in this crazy world we live in, it’s teaching them a way to provide sustenance for themselves and their family if it ever comes to that. At the rate the world is going, we may be going exactly that direction. HOPE NOT!

Tight lines! Send me some photos of YOUR KIDS enjoying their time fishing. It will make my day!