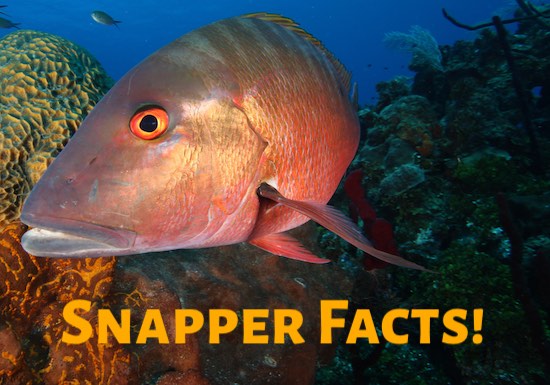 Similar Species to Red Snapper: All others are similar in body shape, but coloration and patterns differ significantly.

IUCN Redlist Status: Least Concern (LC) for most Snapper in Florida and across their range. Cubera Snapper (Lutjanus cyanopterus) are listed as Vulnerable (VU) and decreasing in numbers, this is only one step away from ENDANGERED Status.

Though rare, if you catch one, please consider throwing it back in the water to live and spawn.

Red Snapper (Lutjanus campechanus) is also listed as VU – Vulnerable, with populations decreasing. Florida Fish and Wildlife has strict laws in place to protect Reds from overfishing, but ideally you wouldn’t target the species.

Appearance: Generally in some way like a large pinfish. They are generally darker on the top (dorsal) and lighter toward the bottom (ventral). Some of them have tell-tale marks that distinguish them from other species. Look for dark marks on the side under the top (dorsal) fin, and also for an odd shape on the pectoral fins.

All of these features can clue you in to figuring out which species you’ve caught. The only regulated one in Florida is the Red one. Do be careful to ensure you abide by Florida’s strict snapper fishing rules.

Length: Usually 10-15 inches long inshore. In deep water the size of some fish can range dramatically and you can find some 20+ inch fish.

Weight: Most Snapper you’ll catch inshore are around 1 lb. There are far more smaller ones than big ones inshore. It’s still possible to get a little bigger fish inshore, but you’ll usually catch the smaller ones.

The further you move offshore, and the deeper water you get into, the better chance you have at finding 5 lb., 10 lb., 30 lb. Snappers. There are plenty to find!

Range/Distribution: All over both coasts of Florida, throughout the Gulf of Mexico, and down to Key West. That covers the range for Florida, but you can find Snapper in North Carolina, South Carolina, Georgia, Texas, Louisiana, Mississippi, Alabama, Mexico, South America, and in the Caribbean.

Habitat: Snapper can be found in shallow and deep water. The main feature to look for in the hunt for them is something in the water. A pier, a bridge, a cement wall, a boat, a wreck, rocks, wood, an artificial reef, a coral reef, a wreck, a downed plane, anything.

These fish love structure in the water because they ambush prey and can force fish into situations they cannot get out of easily, and are eaten. They are primarily small fish eaters.

Diet: Small fish of all kinds are excellent Snapper bait. Before you go fishing for them, throw a cast net in the shallows and see if you can get some small baitfish. I mean real small if you’re fishing inshore, something like 1-3 inches long.

In the photo at the top of this page you can see Thonny in St. Petersburgh, Florida holding a nice Gray Snapper he caught off a very small greenback (baitfish) that was only about 1.5 inches long.

You don’t need big bait to catch grouper of that size, fill a bucket with bait you catch and hit the piers. Don’t forget the aeration (bubble maker) in the bucket, or get a bait bucket that will allow you to drop it over the side of the pier to keep water flowing through it. That will keep your bait alive much longer, even

15 Species of Snapper in Florida

Most anglers don’t realize how many species are swimming around in Florida’s waters. The Red Snapper is the only one with a strict season in place. The other species can be caught year round, and there are bag limits, but they are fairly high.

This is a rarely caught Florida species with a black or violet to brown/black dark body with generally no outstanding features. It is found over hard bottom in 12 to 300 meters of water, and almost always below 40 meters.

They can grow to 65 cm long and 3.2 kg. The black snapper is found from the Gulf of Mexico to the South Caribbean.

The Blackfin Tuna is easily identified by the crescent shaped black or dark spot at the base of each pectoral fin. These fish eat a variety of smaller fish primarily.

They are found in coastal water and prefer structure, rocks, wrecks, or reef to wide-open spaces. The Blackfin can grow to a maximum size of 30 inches and around 30 lb.

The Cubera is also known as the Cuban Snapper in Florida. This is the biggest growing and rarest one in the group with canine teeth on top and bottom jaws.

They get massive at around 125 lb. and 4 feet long. The big ones and are commonly caught right around 40 lbs. These are nice big fish that are found along the coast near structure, rocks, and reef. They provide a good fight and table fare if you’re inclined to eat them.

Cubera feed primarily on fish and larger crustaceans. They spawn during summer months in the Florida Keys (islands).

Florida State Cubera Snapper Record: 116 lb., caught near Clearwater Beach, Florida on the Gulf side of the state.

This one is more easily caught at night when they are active. They can grow up to 36 inches long and over 30 lb. They prefer the coast and over structure of any type. Dog Snappers feed on smaller fish and invertebrates.

The Gray Snapper is often called the Mangrove, Black, or Mango in Florida. They prefer coastal shallow water depths with reefs or structure, but can also be found in the mangroves and seagrass beds.

These fish commonly grow to 24 inches and about 10 lb. and are targeted by recreational fisherman for their great taste and because they’re heavier than some of the other species.

Lane Snapper are also called Candy or Clown Snappers by some. This can be a brightly colored fish easily distinguished by the coloration and the dark spot on the sides near the dorsal fin.

Lanes are almost always a pound or less and under 14 inches in length. They prefer the coast and near structure, rocks, and reef like most fish.

The Mahogany is a nice looking fish with the pink/reddish tint on the edges of the fins. The body is a bit thicker than other small ones so you’ll get a little extra meat on it.

This species is common in size around 12 inches and 1-2 lb. Maximum length about 15 inches and 3 lb. Mahogany prefer shallow coast water and always over some sort of structure or reef where they feed primarily at night on smaller fish and invertebrates.

Mutton Snapper prefer coastal waters over structure and rocks. These fish can grow to around 30 inches and up to 25 lbs. They are great eating, like the others, and you can get quite a bit of flesh on one over 10 lb. These feed on smaller fish, crustaceans, and have been seen eating ocean snails.

There is little known about the Queen Snapper. They are thought to grow up to 36 inches maximum length. The adult Queen is found offshore over rocks and reefs of the Continental Shelf around 450 feet deep. Younger of the species are found in water around 200 feet deep.

They are thought to consume smaller fish and squid as their main diet.

The Red Snapper (American Reds or Spot) is the ultimate fish for anglers searching for a great fighting and eating fish. Reds can grow to over 40 lb. and live for 57 years!

These big fish are found in water 30 to 600+ feet deep and usually over structure and in deeper water over sand or muddy bottom. Adults live 20+ years, and possibly much longer. Young Red Snapper are food for barracuda, sharks, turtles, jacks, and other predatory fish.

Reds feed on fish smaller than themselves, shrimp, worms, squid, octopus, crab, worms, and even some plankton. If using artificial bait they will strike on soft baits and spoons. Reds are rarely found north of the Carolinas.

The Schoolmaster snapper is a coastal dwelling fish, preferring shallow water near coral reefs like elkhorn reef. The deeper the water, the larger the Schoolmaster tends to be. Maximum size 24 inches long and 8 lb. Schoolmasters are common under 1 lb.

These fish feed on small fish and crustaceans and gastropods.

The Silk Snapper is reddish pink and unremarkable as far as pattern or coloration. They prefer offshore deeper water near rocky ledges and are most common in South Florida. They eat smaller fish and crustaceans as their main diet. They grow to around 30 inches and about 5 lb.

Also called Beeliner and Mingo snapper. Found offshore and over structure like wrecks and rocks. Vermilion grow to 24 inches and 6 lb. maximum and are commonly found in the 14 inch length under 2 lbs.

Like most of them, this fish feeds on fish, mollusks, and crustaceans. Vulnerable (VU) on IUCN Redlist. Numbers are decreasing.

Very rare, and little is known about the Wenchman Snapper. It is difficult to even source an image of the fish. They appear to have no real outstanding pattern, and their coloration is either reddish pink like this, or pale yellow/lavender.

Yellow tail are generally small fish under 30 inches and only about 5 lb. for most of them. They are in shallow water near coral reef for the most part. They love the warm water of Florida and can be found year round in some southern parts of the state.

They spawn in Summer. Like every other one in the group, they feed on fish and some invertebrates.

Yellow spots on dorsal side (top by dorsal fin).

[Image credits: Some images were sourced from stock agencies, others were obtained directly from anglers in Florida.]