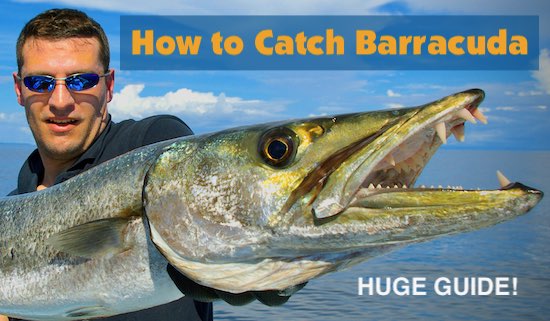 Welcome to our “How to Catch Florida Barracuda – A Complete Guide.” Learn how to catch these big toothy fish on rod and reel with gear that is up to the task.

Find out why, when, where and how to catch big cudas. This is one of Florida’s most POWERFUL Fish!

HOW TO CATCH BARRACUDA — Guide

Barracuda are fun fish to catch because they put up a really good fight. You can find them inshore, from a pier or Bridge, or from any boat over a coral reef.

It’s exciting to catch one because they are so powerful when they are hooked. The young barracuda are supposedly good to eat.

Barracuda can make fast, strong runs at nearly 40 mph. It’s really exciting to hear the drag scream off your fishing reel. It’s almost like catching a king fish, I mean the king mackerel.

Where To Find them Worldwide?

Barracuda fish can be found along the coast anywhere in Florida, Georgia, North Carolina and South Carolina, Texas, Alabama, Mississippi, Louisiana, Virginia, Maryland, New Jersey, and even up to New York. They can be found anywhere south of Massachusetts.

Worldwide they are spread across the globe in hot areas including Mexico, South Africa, South America, Asia, Australia, and the Pacific. I remember catching some barracuda by accident on the island of a Oahu.

They can be in very shallow water or water over 100 yards deep. They prefer to be near structure, especially over Coral reef, fallen trees or branches, and rocks.

In Florida you can find them while fishing off some bridges in the Keys or from nearly any of the fishing piers around Florida.

What Do they Eat?

They eat a variety of fish, squid, and shrimp. They attack just about any fish smaller or of equal size to themselves. They have a strong appetite and will eat opportunistically when they can.

if you’re going to fish for barracuda with live bait you should choose fish I’ve just about any size using a 3/0 or 6/0 hook. Literally, they will eat any fish. They strongly prefer threadfin or ladyfish for some reason. They usually will bite the tail off first and then come back for the rest in a few seconds. So don’t set the hook strongly at first.

What usually happens is that I’m not fishing specifically for barracuda but I catch one by accident. Or, it breaks my line and I realize I need to have some stronger line to catch whatever it is. Then I catch one and it’s so much fun that I start to target for the rest of the day.

I have never eaten barracuda, but many people say it is fun to target for the dinner plate as well.

How to Catch Barracuda — Techniques

Fishing for some barracuda fish offshore can be done by first finding a coral reef, or some big structure under the water.

One of the best baits you can use is something resembling a ladyfish, snake, or eel. But, they hit lots of different cut bait and live bait. It usually doesn’t matter what you were fishing for, whether grouper or wahoo or something else and you will often just catch a barracuda as side catch.

Fishing for Barracuda inshore is really fun and they’ll often surprise you because you’re not even aware they’re around and they hit strong and make good runs. If you have light gear on you’ll surely loose the fish, but you’ll be ready to gear-up with some heavier tackle and get the next one.

To be honest, you probably just need to either invest in or make some of your own noodle lures to catch all the barracuda you want. Smaller ones will catch smaller fish around 15″ that will be much safer to eat and much better eating than the huge ones.

The way barracuda strike is that they often nip the lure or fish you have on the line and come back to finish it. So, if you feel a strike and it drops off. Let the lure sink and the fish will probably come back to grab the rest of it. They bite off live fish tails and come back to get the rest.

Target really small (but legal) link inshore by fishing in sea grass or over rocks. They like warmer water, so if it’s hot, you’ll still have a good chance of catching a barracuda for the dinner table.

See our Barracuda Gear and Rigs page to see what sort of artificial lures work best.

When Is the Best Time to Catch this Fish?

Barracuda are always around, it doesn’t matter what time of year it is, but they are most active when the water warms up and there is a lot of bait and other fish around to eat.

Barracuda migrate up and down the Florida east and Gulf coasts with the winter and summer, but you can almost always find some around.

I strongly recommend only keeping the smaller barracudas for eating. The risk of ciguatera poisoning, high arsenic, chromium, and mercury levels just isn’t worth it. Eat some marlin or wahoo if you want to risk it! Not Cudas!

The small barracuda are edible and some even say they’re good. I don’t like them, but I’m rather picky because there are so many other great tasting fish to eat in the ocean with very little risk of doing my body harm.

Barracudas have a strong odor and a lot of people fry them to get rid of most of the smell. I can’t eat fried fish, I figure what’s the point? I’ll have french fries if I want something fried. Fish is NOT for frying!