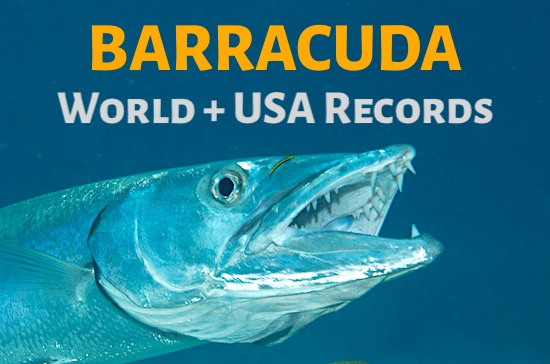 The biggest one ever caught on rod and reel (hook/line) was a massive 102 lb. 8 oz. (46.4kg) and took Thomas Gibson Jr. only about 10 minutes of fighting to land it. This was on February 14, 2013 while he was trolling for tarpon near the mouth of the Cuanza River in Angola, Africa.

The record for biggest barracuda fish in Florida wasn’t even close to the world record at 67 lb. and caught on January 29, 1949 by angler Harold K. Goodstone on Islamorada in the Florida Keys.

Georgia Record on Rod and Reel

On June 26, 1999, Mr. Wayne Hall of Townsend, Georgia had the catch of a lifetime when he beat the current Georgia barracuda all-tackle record with his very large 54 lb. 8 oz. catch. His fish was 59.5 inches long and he caught it on live bait with a straight hook. He caught his fish to the east of Navy Tower R2.

Texas Record on Rod and Reel

In Texas, everything is big. Except their barracuda! 😛 This is on the small side compared to other states. I wonder why that is. Plenty of fish to eat around Texas. Kim Calzada caught the Texas State Record barracuda on September 4, 1993 in the Gulf of Mexico. The fish was 52.81 lb. and was 63.43 inches long.

Mr. Buddy D. Garten was the angler who reeled up the North Carolina all-tackle state record barracuda in 1985. The big fish was 67 lb. 7 oz. and he caught it at Cape Lookout.

H. Shelor caught the South Carolina State barracuda record which was a whopping 65 lb. 0 oz.. He caught it in 1948 by Georgetown and he is from Sumter, South Carolina.

Louisiana Record on Rod and Reel

Alabama Record on Rod and Reel

Mr. Steven Hawkins (not that one) caught the Alabama State Record great barracuda near Mobile, Alabama on July 15, 2005. His fish weighed 52 lbs. 4 ozs.

Mississippi Record on Rod and Reel

Virginia Record on Rod and Reel

No Great Barracuda record listed at their records page.