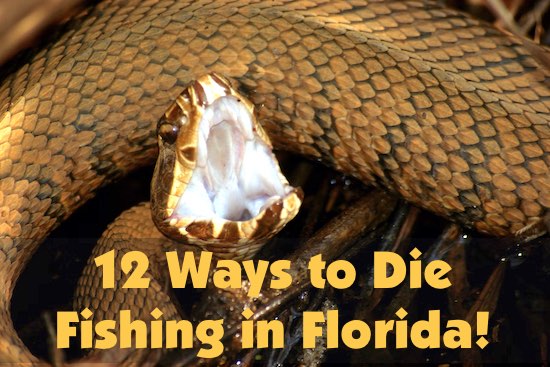 These 12 ways to die on your Florida fishing trip are something to keep in mind. Florida can be an unforgiving place in some ways and you should know all you can about what dangers await you on your fishing trip to paradise.

If you’re a Florida local, you already know all of these, I would think. If you’re visiting for a short time, have a read through and make sure you’re up to speed with the main dangers of the wilderness and mother nature, and even your fellow fishermen.

People are killed while hunting, street racing, and even birthday parties.

Sadly, people occasionally die while fishing too. There have been more than a couple of murders committed on boats in Florida. What better way to get rid of someone?

I remember one case in particular where a guy talked a woman visiting from Ohio and her two daughters into going out on his boat and killed all three. I’ll try to find the story. It was decades ago, but it sums up the danger of fishing with strangers, or going anywhere with someone you don’t know very well.

Visitors to Florida are usually shocked at just how many alligators are roaming around in places that you might think are safe.

We had alligators at some of my apartment complexes I lived in while going to college in Tampa. You should assume that if there’s a body of freshwater, there are alligators there. These toothy reptiles are very common.

How common are attacks? Since the late 1940’s there have been an average of 3 major bite events per year. That really isn’t much in a state of 21 million people. Still, alligators are IN freshwater. Do be careful!

I think a severely leaking kayak in the middle of the Hillsborough River would be much more scary to me than if I was in the middle of Tampa Bay. I like my odds better with the sharks than the alligators.

Still, if your boat is leaking and you are way out in the Gulf of Mexico or off the Atlantic coast, you’re in a very serious situation. Fun and games have turned to life and death. Buy a cheap kayak with bad quality control that misses a weak seam and you’re screwed. It could be that simple.

Preparation for fishing trips is essential. Safety gear, and over-preparing is a very good idea when on a kayak and risking it all for some of the best fighting gamefish in the world.

If you haven’t yet read my shark story, where my girlfriend nearly died, you should do that now before you forget. Or, open it up in a new tab for later.

I wouldn’t expect to have to deal with a big shark while wade fishing, but that was my ignorance. I had already been fishing in Florida for years when that event happen and I still hadn’t wised up. I’m not sure what I could have been thinking.

Humans are capable of making some of the dumbest mistakes while fishing and during life. Try to keep them to a minimum!

There are 16 species of shark in Florida waters. The hammerhead, bull shark, tiger shark, and the Great White are all very dangerous for man. Sharks have been known to attack kayaks and small boats. It isn’t often, but how often does it have to be to scare the pants off ya?

We have 37 snake species in Florida and 6 of them are capable of deadly bites.

Copperhead and cottonmouth snakes are pit vipers that bite quickly and frequently. You only need to step close to one to get a bite and the pain is bad because the venom is destroying tissue at the bite site.

Please give a lot of thought about where you’re walking while you fish streams, lakes, and rivers in Florida.

And, I have a story about this one too. A little 8 year old boy I was a “big brother” for had a bad experience one time I took him fishing at a Florida State Park. Read it here.

Florida has 3 rattlesnakes. A huge one (Eastern diamondback), a big one (Timber rattler), and a tiny one (Pygmy rattler).

The Eastern diamondback can reach 8 feet in length. The Timber rattler world record is 6 feet 2.5 inches. Pygmy rattlers are small in comparison and only grow to about 2 feet in length.

The two big ones are quite capable of killing a person with a bite from their venomous front fangs and they have done that quite a few times in the state’s history. There is anti-venom available at major hospitals for all of these snakes, so getting to a hospital quickly is really important.

Rattlesnakes often shake their tails hard to warn of an impending strike. Keep it in your head as you’re fishing remote spots, or any freshwater spots, because you’ll want to know what it means when you hear that weird rattling sound!

You’re far less likely to see an Eastern coralsnake when you’re out fishing, they are usually nocturnal (active at night).

However, if you’re out at night fishing in high grass at a lake, stream, or river, you’ll have to be cautious of this deadly snake.

There are two snakes that look similar. The coral snake has red and yellow cross bands that touch without any black in between them.

The other snake with black, yellow, and red bands is a scarlet kingsnake and it is harmless. The yellow and red bands never touch directly.

Portuguese man-o-war stings can cause bad allergic reactions that usually are not fatal, but Florida does have other box jellyfish capable of inflicting deadly stings.

The Irukandji jellyfish, usually thought of as occurring only in Australia has been sighted in various places around the world, including the Florida Keys.

I was stung by a box jellyfish while living on the island of Maui. I didn’t write a story about it, but I should. I was spearfishing there and came in to remove my fins and was stung on the inside of the leg. That roadmap of chemical scars didn’t heal for more than 5 years.

The pain was excruciating. My heart beat in weird rhythms. My mind became very confused. I sweat uncontrollably.

Not a fun experience, but I made it!

These spine covered fish are found in shallow water over sand or pebbles, and around reefs across Florida. They are in the same genus as scorpionfish (lionfish) and yet they are capable of inflicting much more deadly stings.

Stonefish have short spines and large, well-developed venom sacks. A sting is very painful and debilitating. You should rush to the emergency room of the closest hospital for treatment.

Hot water immersion of the sting site in water around 113°F (45°C) will start to break down the venom, but go to the hospital anyway before you have life-threatening symptoms like difficulty breathing or irregular heartbeat.

Do not give water! Just focus on cooling the person down with air conditioning, fans, dripping cool water on their head and rest of their body and get medical help.

The FloridaHealth.gov website has a very informative page on heat stroke that you should take five minutes to read here.

Killing 65,000 people a year, heart disease and stroke are the #1 and #3 causes of death in Florida.

Fishing can be strenuous if you think about it. Carrying gear out to the pier if you don’t have a wagon. Missing that fish of a lifetime after reeling it in for 45 minutes and losing it at the pier.

Drinking all day in the searing heat and watching boat after boat filled with bikini-clad teens passing by the pier.

12 – The Road Trip to Reach Your Fishing Spot

Maybe the most deadly aspect of a road trip to go fishing is being on the road in a vehicle and having an accident. Almost 3,500 people died in Florida traffic accidents in 2020 alone. That’s almost 10 people per day. That’s a lot!

Please don’t drink and drive, and stay alert. Give yourself some time to wake your body up before you drive and stay alive to fish another day!

Here’s a must-read article about how to prepare for fishing with some of the ESSENTIALS.