Which Florida Fish is the Most FUN to Catch? (Not What You Think) 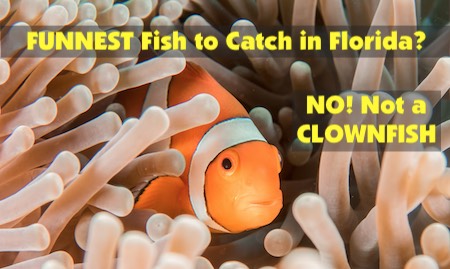 Many anglers fish because it’s so much fun. I count myself in that group, but I also fish for many other reasons like the thrill of the hunt, the laid back experience and to de-stress from work and life. It’s exercise out on the kayak. It’s a great way to spend time with family. So many reasons to go fishing, right?

But which fish is the most fun to catch on rod and reel? Keep reading to find out. (Wait, can fun also mean scary? Hint…)

Is the Bonefish the Most Fun Fish To Catch in Florida?

Many people target the bonefish as the most elusive of all Florida fish. They can be difficult to see, even in clear water. They’re almost invisible. Some call them ghost fish!

I’ve had a blast trying to catch bonefish. They are not only hard to see, but they’re very choosy about how the bait or lure is presented to them and it’s fun to try to outwit them and finally catch one. Many anglers have the bonefish on their bucket list because they’re just so dang hard to land. You can pay thousands of dollars on guides with flat-bottom boats trying to sneak up on these suckers and there’s still no guarantee you’re going to catch one.

Is the bonefish the most fun to catch in Florida? NOPE. Let’s keep going.

Is This Acrobatic Fish the Biggest Thrill You Can Have?

We’ve all been out there fishing the flats around the mangrove trees and caught these little suckers. The hit on your bait, almost always live bait, is fast and furious and before you know it the hooked fish is immediately leaping out of the water madly and trying to shake your hook.

To be honest, it IS EXCITING to catch them. They usually find you and surprise you because you’re not targeting them. Their taste is foul and they are seen as a nuisance fish in Florida where nobody eats them and they don’t get big enough to put up a really good fight.

Is the ladyfish the ultimate fun catch while fishing in Florida? NOPE. Not by a long-shot. They can be great for kids, but by the time you caught a dozen or so you’ll be ready to move on to something else!

Is Catching Snook the Most Exciting?

I love catching snook. I love stalking them, trying to figure out where exactly they are hiding. Until the water gets cold it can be fun to stalk them. In winter, you know they’re at the docks way up in the canals to get some sunshine and stay warm enough to survive.

I love the hit and strong run that screams line off my reel. I love that they don’t try to wrap you around something or dive into a hole you have to get them out of (like grouper).

Most of all I love the taste of snook. I didn’t eat them for a long time, but when I finally tried baked snook I was HOOKED. Amazing fish on a plate.

Are snook the most fun fish to catch? NOPE. Let’s look at a couple more!

Heck yes! It’s always a good time catching Mahi (dorado) from a pier, boat, or anywhere. These are blazing fast fish that can leap into the air multiple times. Mahi are super-fun to catch and when I first thought of writing this piece I thought that Mahi were going to be THE fish to answer the question.

But you know what? I’ve had MORE FUN catching another fish.

The Funnest Fish Must Be a Sailfish!

Right? I don’t know. I haven’t caught a sailfish. lol. Really, I never even targeted them. I will one day I guess. I just see them as majestic beasts too beautiful, too targeted, too few, to target.

I’ll bet catching a sailfish must be a lot of fun, if you can get over the pure drudgery of trying to get it in to the boat. You might fight the fish for hours. Is that FUN? Not for me it isn’t! To be honest, that just isn’t my idea of fun. Is fighting a Goliath Grouper for three hours fun? Nah. Fighting any fish that long just doesn’t seem fun to me. Call me crazy! So, NO, for me the sailfish is not the one.

How About the Thrill of Catching a Tarpon?

Tarpon are incredibly fun to catch. They are strong and jumpy. Their aerial maneuvers are unmatched. They can soar through the air and knock you out of the boat. It happens!

I’ve had a good time catching tarpon, but to be honest I rarely target them. When I do, I can see them all over the place. I know they’re hungry. I know I’m going to catch some. I know I can’t eat it. Catching them is almost like going through the motions.

Are they fun? Heck ya. Are they the most fun fish for me to catch? Well, almost. They’re a blast, but there is still one fish that I like catching more. Can you guess which one yet?

OK, So What IS the Florida Fish that Is the Most Fun to Catch?

It is one that you probably don’t expect to catch. They can be huge. Fifty pounds. Hundred pounds. Several thousand pounds!

They are powerful. They seem to target dead stuff on the bottom, but you can catch them on just about any live or dead bait. You could throw a lamb’s leg on your hook and catch one of these beasts.

You already know… a SHARK.

Catching a Shark is the most fun you can have while fishing.

The THRILL. The FEAR as you realize what you hooked and have to de-hook is palpable when you have a shark on the end of your line and you’re wondering if you’ll be able to get it off safely.

Now THAT IS FUN! Hahahha. I may be a little twisted, but I really think that is the most fun I’ve had while fishing.

I love the unexpected more than anything.

Don’t get me wrong, I do love targeting and catching Snook, Mahi, Tarpon, Bonefish, Reds, Bass, and just about anything swimming in the water as I fish in Florida! But, the biggest thrill I get is when I’m not targeting sharks and then BANG, I’ve got one on my line. And I’m in a kayak. And there’s no land close by. I have to figure out how to get the hook out and not get bitten!

Another thing about sharks that is outrageous fun is when you have a different fish hooked, say a trout, and a shark comes out of nowhere and grabs your fish right in front of your face! When this happens while wade-fishing it’s enough to make you release your bowels! Not joking.

What about YOU? What’s your favorite fish to catch? The one that is the most fun for YOU? Let me know in the comments, I’d like to hear it.