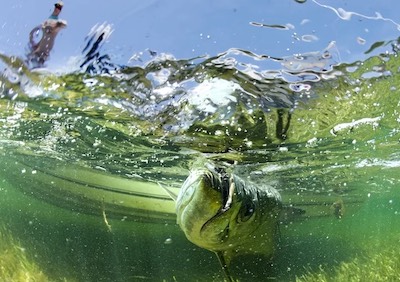 HA! I can’t believe so many people are asking this question. I feel a little sad for people who don’t know the joys of fishing, and I’m going to do my best to enlighten you on this page.

Fishing Is in Our Genes – It’s Primal

There is something about fishing that is deep inside the reptile part of our brain. It’s the same with farming, harvesting fruit from trees or vegetables from the ground. It’s the same as throwing a net for shrimp or mullet. It’s the same as hunting deer and other wildlife for some people. My hunting days are over, but I still spend a crazy amount of time looking for snakes and other reptiles. I don’t kill and eat anything like that, but FISHING IS LIKE ALL OF THESE ACTIVITIES. Fishing is in our blood.

There’s something magical about being able to outsmart a fish and land it. Then you can decide what to do with it. If you haven’t had fish on the dinner table for a while, and it’s legal size and season, you might decide to throw that fish on ice and share it with the family and/or neighbors and extended family depending on how big it is. There’s something magical about providing for your family – isn’t there?

There’s something magical about not having to buy fish or food in a store and bring it home in a bag. Fishing is so much cooler than that. Not only that, you can’t buy all the amazing fish you catch in the ocean at your local fish market typically. If you’re any good at fishing, you can load up an entire cooler of fish in a half-day of fishing if the bite is right.

We get a huge amount of self-satisfaction from providing our own fish for our families. Isn’t that at least part of the reason you fish? It is definitely one of my reasons I’m out on the water so often.

The Urge to Outsmart Other Species is Overwhelmingly Strong

I mentioned it above. There’s something addictive about outsmarting different species of fish to catch and land them. Some fish are more difficult than others to catch, and that challenge really brings out the competitor in us. It’s natural, right? If there’s a type of fish I cannot seem to catch, then I MUST CATCH IT to make myself feel like I’m smarter than the fish.

A fish’s brain is something like… wait, I’ll look it up.

A human’s brain is around… wait, I’ll look it up.

SO, what I’m saying is, for us to actually FEEL at least twice as smart as fish – like we are – we rise to the challenge of catching difficult fish so we can feel better about ourselves. I certainly feel LOTS better when I’m landing that hard to catch fish.

Some fish are harder to catch because they fight so hard – tarpon for instance. Others are so hard to catch because the presentation, the bait, the water temperature, the tide, the moon phase, the time of day, the water visibility and your birthday horoscope all have to align. Yes, I’m talking about those damn BONEFISH!

There’s something primal and SO satisfying about catching a fish and pulling him up and sticking a thumb in his mouth. It’s like NOW I GOT YA!

Fishing Puts Us In Touch with Nature

There’s something else about fishing that most of us realize is a bonus of planning fish-catching trips near and far. We get to head out into prime natural habitat and relax. This also soothes that reptilian brain I was talking about.

I think many of us still don’t turn our phones on when we’re fishing. I certainly don’t. I don’t want to talk to anyone except who I came fishing with. If I go fishing alone, there’s a good reason for that. I probably don’t want to talk to anyone. Sure, I’ll shoot the shi* with someone wade fishing not too far away if he’s catching fish and I can ask him what he’s using. Who wouldn’t? But for the most part, the quiet and solitude of fishing is a huge draw for me and for most of us I think. You too – right?

Florida has some real natural wonders, and you can find some of them by fishing. Here are are a couple of areas I hope you get to see in Florida while you’re fishing.

There are lots of mangroves lining the east side of St. Petersburg, and the water is shallow enough for wading out a ways if you feel up to it. The shallow water has lots of grass and there are plenty of pinfish and other schools of bait you can catch with a throw net.

I spent a lot of time here because it was so close to my home in Feather Sound. If I wasn’t in a hurry, I could find a parking spot that didn’t require quarters. If I got there early, I could stay the entire day fishing on the pier and have the most awesome time. I met hundreds of people there, and it was a very cheap and soul-enriching way to spend days at a time.

There are SO MANY other great fishing places to explore in Florida. The Keys? Ft. Lauderdale? Melbourne? Sebastian Inlet? Vero Beach? Bradenton? Fort De Soto Beach in South St. Petersburg? Sarasota? So so many!

Fishing Can Cost Nearly Nothing!

Well, almost nothing… all things considered!

What else can bring so much enjoyment for so little cost? Sure, there are initial costs. Considerable initial costs for most people. I’m a gear hog too. I’ve bought thousands of dollars of fishing gear over the decades, and I’ll buy thousands more in the future. Hell, I’m not dead yet!

The point is, once you have a rod, line, and some hooks, a throw-net for bait, a bucket and a bicycle, you can go down to the beach and catch tons of bait and catch redfish from the shore. You can wade out and reach spotted trout grass. You can find a fishing pier and catch flounder, snapper, grouper, mahi, bluefish, sheepshead, and many other species.

The fishing rod and reel should last you a few years. MINIMUM. Buy decent gear to start with and take care of it. Oil it up every couple of months. Squirt it out if it got salt on it. Clean your rod every once in a while – you’ve probably NEVER cleaned a rod. Try it!

So your rod and reel should last at least 100 trips. That’s at least 100 days of fishing for what? $200? That’s $2 a trip! Add line and hooks, net, bucket… your total cost for fishing gear is around $3 a trip. That’s SUPER cheap. You can’t go ride gocarts for $3 all day. You can’t even paint all day for $3. You can run, but fishing is a LOT more fun than running.

My Uncle Fishrat Keryeski wrote a Fish Report for years once a week or so, as he was retired and he got great joy out of relaying his exploits – pitting himself against all others on the trout lakes of Virginia and quite often coming out “the winner.”

Like Fishrat, many of us consider fishing to be a competition among friends and even strangers. There’s something to be said for the feeling of telling a stranger you bagged your limit. We all love that. Don’t we?

Whatever YOUR reason for fishing – get out there and fish as much as you can. Share it with a kid or two, or a bus full. Share it with a relative that sits in the house all day. Fishing can work wonders for all kinds of people who have lost their lust for life.

PS: I thought I’d better finish this with a tribute to my Uncle Fishrat. He passed away due to cancer he had for years. I got up to see him for some trout fishing before he did. Fishrat was a real character and he could make me laugh constantly. I don’t know if you’ll laugh, but it’s kind of funny considering he worked at the Pentagon in traffic safety and was generally a pretty serious guy. Great to see him enjoying life as we get ready to go fishing! Video below.