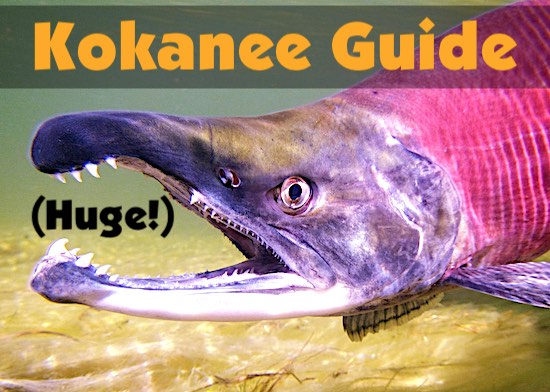 Kokanee salmon are freshwater salmon that never leave for the saltwater. Sometimes they are landlocked, but they wouldn’t travel down to reach the ocean anyway. They are called anadromous fish for that reason.

Kokanees are basically sockeye salmon, but sockeyes do make their way to the ocean to live the majority of their lives before coming back to freshwater to spawn and die.

What Ratings Do Kokanee Salmon Get?

COMMON NAMES: Kokanee salmon can be called other names as well in different parts of the western United States where they are.

ORIGIN OF NAME: The name

SPECIES: Oncorhynchus nerka, is the species for sockeye salmon. This fish may be a subspecies or an entirely different species, but it hasn’t been studied to find out how much different it is than the sockeye salmon.

APPEARANCE: These fish are smaller in appearance than the sockeyes they are closely related to. They have small eyes and small teeth. Their overall color is silver with a tint of blue.

Their morphology resembles common trout and other salmon. They differ from trout in a few ways. They have finer (smaller) scales, larger eyes, and a deeply forked tail compared to trout.

When spawning in October – November males and females turn bright red. Males develop the typical hooked jaw with a hump over the neck and their teeth grow larger.

AVERAGE ADULT WEIGHT: Typical weight for an adult Kokanee salmon fish is about 1 lb. This is far less than the 8 lb. Chinooks (on the small side). On the bigger side with the right nutrition, they can reach 3-5 lb. Salmon species’ world records can be found here.

RANGE: Small lakes all over the western USA is where these fish are native. Some have been introduced into various lakes and streams around the world. Globally the fish occupies a geographic range of about 4.44 million miÂ² (11.5 million kmÂ²).

HABITAT: They remain in lakes their entire lives. They grow quickly but there isn’t enough nourishment in most lakes for the Kokanee to grow very large. They prefer water 15 to 90 feet deep. One pound is the average weight for adult fish.

IDEAL WATER TEMPERATURE RANGE: Chinook and Kokanee salmon prefer colder water and the average temperature of lakes they inhabit are around 50-60ÂºF (10â€16ÂºC).

DIET: Sac fry (alevin) when first hatched will feed on the egg sacs and the small bit of yolk that remains. Sac fry remain in the nest during this period, growing quickly.

As they get older they feed primarily on zooplankton and chironomid larvae (midges), and then eventually on aquatic insects on the bottom of the lake. If present, they will also eat small freshwater shrimp, and tiny plants.

PREDATORS: Chinook salmon when present are the main predators of Kokanee salmon. Other larger fish, birds, and mammals like otters also eat the small fish.

For adult fish, human beings take thousands of fish during fishing season in the western states.

Bears take some of these salmon, but since they’re not making the long distance runs up and down the rivers to reach the oceans, there are far fewer taken by bears than other anadromous salmon. Of course, when the salmon spawn and die, the bears, eagles, and other predators have plenty to eat.

REPRODUCTION – In November – December in most places, the adult Kokanee fish spawn on gravel beds. If too much sediment washes into the lake before this period takes place, there can be a huge population decrease for the following years.

Some lake populations have declined remarkably over the past 15 years or so. In some areas, they are listed as threatened – like in Ozette lake, Washington.

The IUCN Redlist lumps the fish in with the sockeye salmon and calls it “LC” of Least Concern. This is because overall the populations seem to be doing OK. Just certain areas are losing a lot of fish.

Some areas where the fish are dying off are enforcing strict measures to help save the fish.

Some lakes in Canada have also seen a decline in native kokanee. At one National Park they counted just 88 fish in 2007 when the previous count was 2,800. We can expect more laws to protect the fish going forward.

Where to Find Kokanee Salmon in the USA?

Some states in New England like New York and Maine introduced the species to their lakes. North Carolina added some to lakes there.

Here’s a partial list of lakes in the state of Washington where you can find and fish for Kokanee Salmon. The best months are from March to October.

In Canada, Alberta and Saskatchewan have populations of this little salmon in many natural lakes.

Because these fish don’t reach a large size beyond 3-5 lb. they are not nearly as targeted as other salmon species that grow larger. Adults can be coaxed into taking flies on the lake surface.

Spoons and spinners of all kinds of colors (red, pink, yellow, green) are used, tipped with maggots or some other live bait. It’s also a good idea to add some scent to your lure to entice a bite.

If you watch guys who really know what they’re doing when fishing for these fish they are on a boat fishing deep in a lake. 18 feet to 90 feet deep typically. They use wire rigging to drop their line down to the proper depth. Their line is clipped with a plastic laundry clip like thing to hold it down that deep.

They troll slowly these spoons and spinners. The salmon they catch are really small and even smaller than trout in a stream, but if you catch enough of the, I guess that’s dinner – right?

Here’s a Video to show the lengths these anglers go to in catching the Kokanee fish.

The world record belongs to Ron Campbell who caught a 9 lb. 10 oz. kokanee fish on the Wallowa Lake in Oregon. The state record has come from this lake 5 times and been broken here over and over. Ron says there are bigger salmon in the lake that he has seen..

Washington State, USA. On June 26, 2003 the state record was caught on Lake Roosevelt by Clarence F. Rief. This lake is located in Grant County. The big kokanee fish record weighed in at 6.25 lb.

Oregon, USA – same as the world record which came from a lake in that same state.

California, USA – On July 20, 2013 Mr. Bill Brush from down in Nevada City caught the California state record kokanee at Lake Tahoe. The fish was 5 lb. 2 oz.

Resources – these are some of the resources used in creating this ultimate guide for Chinook (King) Salmon, in addition to dozens of studies, slide presentations, videos, and charts and graphs.

Other Indexes to More Fishing Articles

We have an ENTIRE AMAZON FISHING STORE here you can browse for Top Fishing Gear.