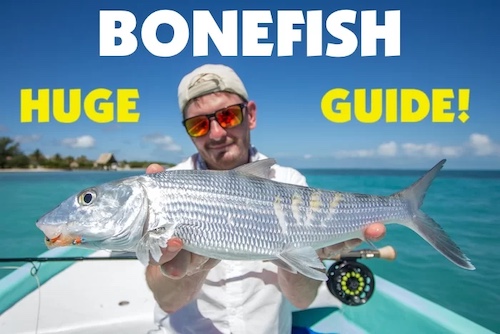 Welcome to our “How to Catch Florida Bonefish Fish Guide!” Why are bonefish so popular? They are hard to catch and provide one of the ultimate tests for anglers looking to land one. Florida is home to some nice sized fish of this species so we made this massive guide to help you catch some!

HOW TO CATCH BONEFISH – Guide

Species Identification: Most often caught is from the Family: Albulidae. Genus: Albula. Species: Albula vulpes. There is another species called the Longfin Bonefish (Albula nemoptera) that is seldom found in Florida.

They are silver and almost invisible in the water at times, depending on the sunlight. You’ll need a good pair of polarized sunglasses to be able to see them well and spot them before they spot you.

IUCN Redlist Status: Near Threatened (NT). Last assessed in March 2011, Albula vulpes were found to be threatened by many factors, some of them listed below. Another assessment is urgently needed.

Environmental and Human Threats to Bonefish

Weight: Up to 18 lbs. but rarely more than 10 lbs. The typical fish caught in Florida is from 1 to 6 lbs. Fish over 8 lbs. are considered big.

Range/Distribution: Infrequently, the fish is found all the way up around New York State. They are common in South Florida from Miami and south down to Cuba, Mexico’s Yucatan Peninsula, the northern coast of South America, and over to Bermuda and the Bahamas.

Habitat: This bottom-dwelling fish enjoys saltwater habitat in water up to 50 meters deep. They are often found in very shallow water over sand, grass, or rocks where they search for crabs and other prey. Bonefish can school together in groups of 100 fish.

Studies showed the fish move into the shallows on incoming tides and move back to deeper water with outgoing tides. The bigger bonefish – the trophies – tend to remain in the deeper water. Fish will change areas every few days that doesn’t appear to be on any discernible schedule.

To be honest, bonefish have this mystery built-up around them, no doubt by the multi-billion dollar fishing industry, which teases them as some sort of impossible to catch fish that requires the ultimate stealth and skill to catch. Is that the reality? Not really.

They can be quite hard to catch if you’re going for big ones which are very leery of presentation and any movement in the water from a pole, wading through the water, or too hard a splash when bait hits the surface.

In certain areas where bonefish have been targeted over and over by guides, yes, it can be hard to catch them because they’ve seen it all.

However, there are plenty of places where these fish are not that hard to target. Anglers switch to fishing for them with fly rods and flies to make it more challenging because catching them with dead bait on the bottom can be too easy.

It’s not unheard of to catch 20 bonefish in a couple of hours when you find a school of them.

Few people tell you that. It’s supposed to be this impossible to catch fish that requires an incredibly knowledgeable guide and top-notch gear. The truth is, you can catch one at the beach in Miami or one of the lesser known Florida Keys with a piece of shrimp fished on the bottom.

So, WHY catch bonefish? Pound for pound they are probably the strongest and most exciting fish to catch. They can give a blistering 200 yard run where they scream line off your reel. You think you’ve hooked a kingfish and then reel in this little 4 to 8 lb. bonefish! So, they’re fun to catch.

Where To Find the Gray Ghost?

From Miami down to the Florida Keys is the best spot in the USA to fish for bonefish, and the place where everyone knows to go catch them. There are many charter fishing tours in the Keys beginning around March. They start before sunrise and fishing around 3 pm. The days can get real hot so the boats like to finish around then. Everyone is worn out from strong sun by then.

In the Florida Keys, Permit, Bonefish, and Tarpon can be sight-fished by looking for their fins tailing out of the water as they dip their heads to the sand to search for food. They often swim in such shallow water that you can easily see them.

If not, the polarized sunglasses mentioned above can be the perfect tool for helping to spot them. A good pair can help you find fish of all kinds in saltwater and freshwater.

Diet – What Do Bonefish Eat?

Bones eat a variety of prey as listed below. This list is not exclusive, they can be opportunistic feeders.

Which fish target bonefish as prey?

Sharks and barracuda frequently target schools of these fish.

How To Catch them?

As I said at the top of this page, bonefish are difficult to find and catch, but not impossible.

I love the UglyStik for just about any sort of fishing. One with light action works well for these silver bullets. You don’t need much in the way of line, a 6 lb. or 10 lb. fluorocarbon line can suffice. A simple 1/0 circle hook is perfect for these fish.

You don’t need a $300 fly-fishing investment to catch bones. Just go try to catch some with whatever rod and reel you have. Or, you can try one of our suggestions below (working on it).

The all-tackle bonefish record comes from a huge fish caught in Islamorada by a visitor from Connecticut on March 19, 2007. The fish weighed 16 lb. 3 oz.! Bob Schroeder was the lucky angler.

His guide spotted the beast about 100 yards away and they poled up to it and Bob tossed a shrimp well ahead of it. The rest is history. They let the fish go but took detailed photos and measurements. This massive fish was caught on rod and reel with a live shrimp and 16 pound test line.

This is the 3rd largest bonefish caught worldwide, with the other two big ones going to fish caught in South Africa.

Beginning June 2013 it became illegal to harvest (keep) bonefish caught in Florida. In September of the same year, the Fish and Wildlife Commission decided using multi-hooks with natural live or dead bait must cease.

HOOK AND LINE fishing only with this species. No snatch hooks. No nets. No spearing. No multi-hooks. Singular hook only with live or dead natural bait.

Here is our page covering Florida Fishing Licenses. There is no special Bonefish permit required at this time.

They’re called bone-fish for a reason! Nobody really eats this fish. Add to that the fact that it is now illegal to keep any size fish and that makes this section easy to write. They are not known for their taste, so this is not a big deal.

There are so many more delicious fish to eat in the ocean around Florida. Some of the best are: sheepshead, redfish, snook, seatrout, Tripletail, Wahoo, and Snapper!

This is one fish that you’ll be targeting often, but it won’t be for its taste! They have blistering runs where they can strip out well over 100 yards of line from your reel. Funstuff and it just never gets old!