Where to Find Tarpon in Florida? 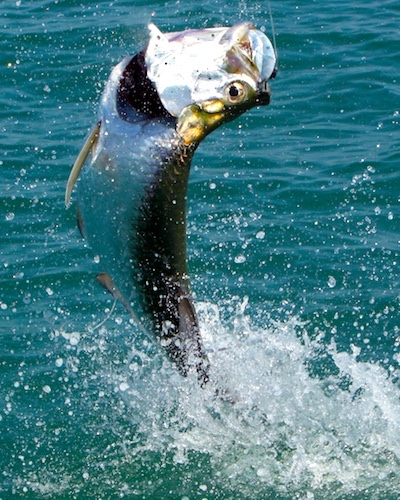 This page is all about WHERE to find tarpon fish in Florida from the shore, piers, and from a boat. If you know of any other tarpon hot-spot in Florida, do let us know so we can add it to this guide! We have a COMPLETE TARPON FISHING GUIDE here.

Where is the Best Tarpon Fishing in Florida?

I lived in Tampa and St. Petersburg, Florida for eleven years and I became something of a fish fiend during my time there. It’s hard not to when there are so many different edible fish to catch. Plus, I lived right on a saltwater canal and all I had to do was throw my Wilderness Systems Perception kayak off the dock and gingerly climb in, and I was set for 10-12 hours of fishing.

Of course, I brought a backpack full of food, buckets of shrimp and a tackle box of lures to get me through the day. I usually trolled something off the back of the kayak and threw off the side when I stopped. It was always a non-stop day of catching fish. If you haven’t had the pleasure of fishing Florida around the mangroves – it’s something you shouldn’t pass up if you ever get a chance!

Now, tarpon fishing is another thing to brag about. There’s a reason “Tarpon Springs” is named that! Tarpon Springs was just north of Pinellas County on the coast up near Clearwater, Florida. Up to eight feet long and 240 pounds – the tarpon is an incredibly powerful fish that is difficult to land under ideal conditions, and always great fun trying!

When I lived in Florida, I would only go from Tampa down to Bradenton and Sarasota for my fishing. I caught so much in these places that I just never made it as far as Fort Myer’s amazing Boca Grande for fishing! You’ve probably heard about it, Boca Grande is the densest area on the planet for tarpon – and it is THE #1 HOT-SPOT for tarpon in the world. You just can’t not go – but I didn’t go.

You can show me up and go and tell me all about it. Even though everyone knows Charlotte Harbor of Boca Grande is the hottest place for catching Tarpon, you should still go because it’s never that crowded that you won’t catch fish. EVERYONE is catching tarpon in Boca Grande during the months of May and June – but really from April through July is quite nice!

And wait, that’s not it. From Boca Grande, head south – all the way to the Everglades is bursting at the seams with tarpon from May to June each year.

Click here to see the Google Map for Boca Grande. Imagine tarpon swimming all over the area between land masses and jumping over people’s boats, onto boats, knocking people off boats, etc. This all happens in the wild and wacky Boca Grande during tarpon season!

The Everglades National Park is a year-round hot-spot for tarpon because the waters are so warm – perfect for the big fish year-round.

Rabbit Key Basin and the Keys close to them can be very productive as are Sandy Key, Lower Matecumbe Key, and all the canals and small rivers (Ingraham, Lostman’s, Harney, Turner) leading into the ocean.

Islamorada, one of the middle Florida Keys is about 22 miles from Key Largo going toward Key West. Islamorada is, like Boca Grande, an absolutely mental place to fish for big tarpon. Many fishermen and fisherwomen? plan their entire year around the April to June Tarpon madness so they can catch as many as possible.

Many of them won’t admit it, but they’re dying to get the world record tarpon – or at least the state record. Can you imagine the pride of having landed the biggest tarpon ever taken in Florida? Someone has to do it – might as well be you, right?

Here’s a list of typical yearly hotspots to try in Key West and surrounding waters and keys.

Twenty-seven miles farther west from Islamorada Key is Marathon Key – another fishing hot-spot. Fish bridges just because they’re there and tarpon love them. Mullet are easy to catch with a throw net and last a while on the hook. Even when dead, the tarpon will eat them. During the April to June months, the tarpon feed is frenzied and non-stop. Try bridges all along the keys – literally – try them all and find your own hot-spots. Try JACK BANK as a usually firing hot-spot.

The entire distance from Miami to Key West is a massive tarpon feed and they’re hitting everything from pinfish (small baitfish) to mullet to artificial baits that look like any decent sized bait fish. Keep in mind you may lose your artificial lures to tarpon’s sledgehammer hits.

Tarpons will be biting throughout the keys – focus on the middle keys – through the end of the month of July. If you get a chance, fish some bridges at night – either from the bridge or on a boat next to it. The rush of a tarpon hitting out of nowhere on a top-water plug is an adrenaline rush you’ll never forget. I certainly have NEVER forgotten my first one!

If you don’t want to sleep on your boat for a couple weeks while you’re smashing the big fish – you can choose any of hundreds of little places to stay on one of the Florida Keys. You might make a reservation because the time of year is crowded for accommodations.

Tarpon are found all over southern Florida – on both coasts, but the further south you go, you find the real tarpon hot-spots! Right off the coast of Miami in Meloy Channel and Fisherman’s channel and leading into Government Cut – wowie! It’s a tarpon parade over there by the South Pointe Park Pier.

Then, moving south, right below Miami is the 26-mile-long Biscayne Bay – an amazing fishing spot of its own for other species, but the tarpon are found just south of this big bay in the winter months of January through March, and then spring and summer from April through June. Try Manatee Bay and Little Card Sound – there are dozens of small inlets to fish for and catch big tarpon between north Key Largo and the Florida mainland.

St. Augustine is on Florida’s northeast coast almost at Jacksonville, but just south. The season here is from June through the end of September. St. Augustine is one of the best spots to fish for lots of different species of game fish, the tarpon is just the biggest and most fun! It’s a charming little area too – well worth a stay for a few days to look around. Lots of art shows and great places to eat. Tarpon fishing guides can be found up to this far north too – use one if you want to optimize limited time off from work to catch tarpon.

You need not go far offshore – the tarpon will be within 3 miles of the beach for the most part. Sometimes there will be tarpon all over Sebastian Inlet Fishing Pier. That’s one of the best times to head over to this amazing fishery. This is nearly always the case, wherever you’re fishing for them – close to beach and/or structure – bridges.

As I said, Tampa Bay and the surrounding waters were my stomping grounds for over a decade. Tarpon can be found way up Tampa Bay to the Gandy Bridge, and beyond. On the map here the Gandy Bridge is marked as “Highway 92” bridge. If you zoom in on the west side of the bridge where it connects to St. Petersburg, you can see what looks like a road that ends.

That’s the old bridge they kept around for us – and made it a fishing pier, and then closed it on us! You could find all sorts of fish off that bridge – during day or night, but the night is the most fun by far when the tarpon jump your floating lure… and don’t be shy about it. Choose a BIG lure. With BIG hooks – size 4/0 to 8/10 or even 10/0. No joke. The tarpon mouth is massive and tough. Better to use the big boys to be sure you hook them.

Other areas to fish are just heading up the coast of Clearwater toward and past Tarpon Springs, up to the Anclote Key.

From Tarpon Springs you can go north or south or just stay where you are, and you’ll be into tarpon. The shallow flats area around Homosassa Bay the freshwater Crystal River are holding tarpon from May to June.

If you want to keep going north, you can go all the way to the panhandle (west side of Florida along the northwest coast) to Apalachicola – and you can STILL find tarpon in the early months.

So to Summarize, just WHERE IS the Best Fishing in Florida? It’s Here…