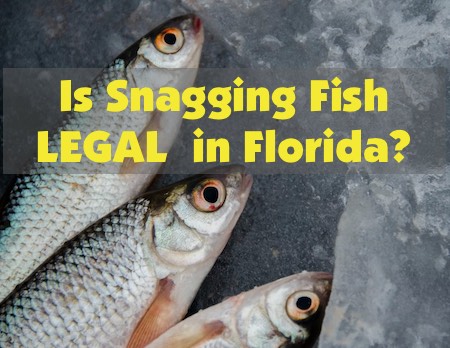 Though I’ve never snagged fish in Florida because I just figured it was illegal and I thought it was morally wrong, I’ve seen other people do it on occasion and I wondered if it was legal for all fish, some fish, or no fish species.

What is Snagging Fish?

Snagging is a method of harvesting fish in which usually an unbaited multi-hook (treble hook usually) is dragged through the water at high speed to snag a fish in the body. The FWC in Florida also sometimes calls this “snatch hooking” and other times just “snatching.”

The law said nothing about largemouth bass and smallmouth bass being game or non-game fish. We have written for clarification.

Freshwater non-game fish may be snagged from a boat or from shore during daylight hours except for these areas:

Snagging (snatch hooking, snatching) mullet in saltwater is legal. That is all we can say for sure at this point. Keep in mind that in some areas of the state, snagging for any fish may be illegal. State parks for instance. You’ll need to do more research if you’re planning on fishing in, snatching in, netting in, state parks and other protected areas.

The Florida Fish and Wildlife Conservation Commission make it extremely difficult to ascertain whether snagging fish with a treble hook (or any hook) is illegal for specific species of fish in saltwater. They do clarify over and over that snagging Tilapia is legal. In some regs they use the words “snatch hooking” to mean snagging with a hook. In others, while referring to tarpon or tripletail, that snagging is illegal. Is that snatch hooking is illegal? The regs in this area are extremely unclear. We sent them a request for clarification today. We’ll update this post as they respond.

I was fishing for bass at a small bass lake “Dover District Park” about 500 yards long in Dover, just south of Brandon, Florida near Tampa and I hadn’t caught anything in my usual spots so I took a walk to the far northeast side of the lake where there was a lot of water plants growing. I fished there for a few minutes when a young guy arrived with a rod and reel and a big 3-prong hook (treble hook) that was weighted at the bottom center.

He threw the hook far into the lake and reeled fast and jerked the rod like he was setting the hook over and over. Within ten minutes he had hooked three big tilapia through the body and put them in a bag and headed back where he came from. I didn’t speak to him, just watched what he was doing. I didn’t know whether it was legal or not for tilapia fish to be snagged.

Snagging fish in Florida is illegal in almost all cases. Does it happen by accident, sometimes, sure. I remember hooking a tiny seahorse down at the Sunshine Skyway Pier one time, purely by accident. It’s not a common occurrence. I think if you do snag something even if it’s legal size, you’d better return it to the water in case someone turns you in. Florida Marine Patrol is often scanning the water with binoculars for poachers and that’d turn out bad for you if you kept a snagged fish.