What is the Biggest Redfish Caught? (By State) 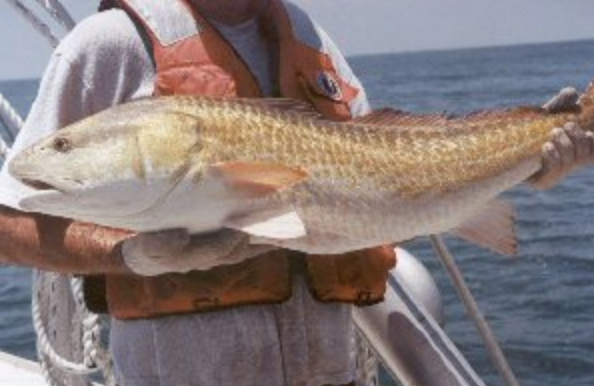 Redfish (red drum – Sciaenops ocellatus) are not only one of the best fish to eat for dinner, but they are also a fun fish to catch whether you’re a child or an old angling veteran. I first started fishing for redfish while living in Florida from 1991 to 2002

The redfish records vary quite a bit from state to state, and you might be surprised that the world record for the biggest redfish ever caught is not from Florida or Texas!

The redfish world record comes from North Carolina where a 94 pound 2 ounce redfish was caught!

On July 5th, 2016, Joe Diorio woke up feeling a bit under the weather but decided to head out fishing anyway and see what might turn up. He filled up his live-well with bunker and headed out to a spot in Saybrook, Connecticut he thought would do well on a slack-tide.

Once there he immediately began landing big fish – catching a couple of striped bass.

He dropped a bunker down on his rig and something big cut his bait in half. He put on a bigger one and dropped it down and held on tight to land the largest redfish (red drum) ever landed in the state of Connecticut. He knew it was a contender for the biggest fish ever in the state, so he threw it on ice and drove into the dock to hand it off to friends while he went out and fished some more.

The state record red drum in Delaware was 75 pounds – a big one – from Dover, DE way back on June 15, 1976. The lucky angler was James Vandetti. The fact that there hasn’t been a new record for over 41 years means there just aren’t that many redfish in Delaware. It may also mean there just aren’t that many fishermen/women up there to set a new record. Anyway, it’s wide open!

In January 2014, Capt. Billy Rotne and Tom Olivo caught a big redfish in Mosquito Lagoon on light fishing tackle that, when measured, crushed the current Florida redfish record. The fish took half a crab and battled for three-quarters an hour before finally being landed. The big bull redfish was 54″ long and 30″ around in girth. The weight was interpolated using the equation for redfish weight -and it was estimated at 60.75 pounds.

Get the 99 cent PDF of all of the above REDFISH FISHING INFORMATION to take with you and read on your phone, tablet, or computer. Or, print it out. Up to you. GET IT HERE >

The Louisiana State redfish record has stood for 25 years! The big bull red was taken by David Weber in June of 1992 and weighed 61-pounds.

Forty-seven years ago the state redfish record was set with a 44-pound fish, and only recently in 2016 was it finally broken in Mississippi. The Mississippi Dept. of Marine Resources certified a 52-pound, 4.2-ounce redfish was caught in May 2016 and is now a new Mississippi State record.

The world record redfish catch comes from North Carolina near Avon, N.C.  David Deuel was using rod and reel to fish on the bottom when he landed this big bull redfish on a mullet on Nov. 7, 1984. The fish was about 60-inches long and weighed 94 pounds 2 ounces.

A big 55-pounder was caught in 1985 by Daniel Yanino in Great Bay, New Jersey for the NJ State redfish record. Thirty-two years already, and not broken? Come on – who’s going to catch the bigger red?

A massive 75-pound redfish was caught at Murrell’s Inlet over 52 years ago back in 1965, and the record still stands! A.J. Taylor from Conway, South Carolina holds the record.

Texas claims a lot of big stuff – but uh, they don’t have a very big redfish record. Not sure why that is, but the record redfish was only 39.13 pounds and was 48″ long. The red was caught on October 1, 2008 by Dr. E. Stanton Shoemaker fishing with a fly rod and polar bear slider. He is not a Texas resident, he is from Upper Laguna Madre, CA.

So, those are the United States Redfish records we could find. Notably, there was none found for New York State, which was surprising, as we have heard of them found there. Does anybody know where I can find that redfish record?