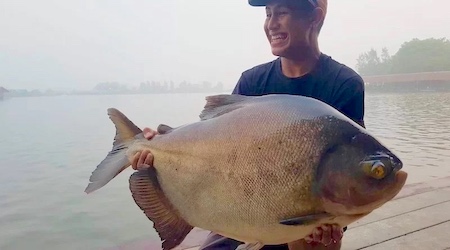 Welcome to our “How to Catch Red-Bellied Pacu Fish â€“ A Complete Guide” where we give you the exact methods and gear you’ll need to catch this spunky little aggressive Florida fish.

What Ratings Does it Get?

PRO TIP – Red-Belly Pacu are super-aggro and will attack anything dragged in front of their faces. Use a bare treble hook to save your lures because these fish will destroy them like piranha. This primarily ‘vegetarian’ fish is NO JOKE.

Similar Species: Red-bellied Piranha (Pygocentrus nattereri)- no kidding. How can you differentiate between the harmless Pacus and the Pirahna?

The teeth in the Pacus are flat on top. They are sharp, but nothing like the razor-sharp teeth of the piranha.

Length: In ideal conditions, they will grow to almost 3 feet in length and weigh around 55 lbs. Conditions dictate how big they grow. I have fished for them between the east and west coasts in Southern Florida and never seen one bigger than 15-inches long.

Weight: Typically around a pound in Florida, with the potential to grow much larger (50+ lbs.) in ideal conditions that a lake can provide. Fish grow fast to 1-2 pounds and are constrained by the environment from that point forward.

However, if kept in an aquarium and you feed it often enough, it will outgrow all the enclosures you can afford. Hence the reason they are an invasive species in Florida. People keep them until they outgrow their aquariums then toss them into lakes and canals.

Highly illegal, but it happens all over. Look at the Everglades – we have Reticulated and Burmese Pythons!

Natural enemies include beetles and dragonflies while still in the egg larvae stage. When adult, alligators can prey on them. (Paper)

Description: Very similar in appearance to the red-bellied piranha. They have a red belly as well which is mimicry and protects it from some predators, and likely people who cannot distinguish between the two when seen in bodies of water from above.

Juveniles are 2-3 inches. Adults can reach nearly 3 feet long and are flat in the vertical plane. This fish has two rows of teeth with the other row being much sharper than the inner. The outer teeth resemble teeth on a wood saw.

Range/Distribution: Red-bellied Pacu are freshwater fish, though they can stand strong brackish water as well. They are found all over Florida in canals and lakes mostly.

This invasive species has spread throughout the USA, including into Georgia, Missouri, and even Chicago waterways. Some of the fish are released by pet owners. Others escape during flooding of fish farms.

The biggest World Record we’ve heard about was the 56 lb. 2.9 foot long fish mentioned on a Florida fishing TV show. That’s a big fish. Pacu can live from 20-30 years in captivity and it is not known how long is typical for wild raised ones.

Why Catch these Fish?

If you live in Florida, you probably already know about these fish. They are an invasive species that tend to take over because they are so aggressive toward other fish, and they have very sharp teeth.

So WHY catch them? They are an absolute BLAST to catch. They hit anything you drag through the water. I’ve tried all sorts of plugs and worms. They hit EVERYTHING. Pacus are probably the best fish to target with children because you’re going to catch them without hardly TRYING.

Just throw a small lure out and it WILL BE ATTACKED in the canals by something.

What Do they Eat?

Because they are omnivores, they prefer to eat all kinds of food items. They’ll eat large nuts – crushing them with their strong back molars. They’ll eat plants, fruit, and various leaves.

If insects fall into the canal, it may eat them. People who have them in captivity feed them just about anything. Broccoli, raw chicken, cat food, etc. They also love any small freshwater fish because they attack small lures like mad.

How To Catch One?

The best way to catch this fish is to use a small very sharp hook like a Gamakatsu chemically sharpened hook. Put a tiny piece of shrimp or a very small piece of cut bait on the hook. That’s it.

Drag it through the water once and you should have a fish on. Seriously, it’s that easy. These are aggressive eaters and they’ll come out and chase your bait like it’s the last thing they’re ever going to eat.

Where To Find Pacu Fish in Florida?

1.) Pacu can be found in nearly any lake or large canal in Florida – If you’re wondering if the body of water holds this fish, just get yourself a light rod with 4 lb. test and put the smallest lure you have on your line. You may want a piece of strong leader – even thin wire, but they don’t get chewed through all that much.

Start dragging that lure through the water anywhere from zero to one foot deep. If they’re in there, you’ll have some of the very aggressive young ones attacking your lure like piranha.

If there’s big ones about, you’ll need to change to heavier line and possibly rod.

Absolute BEST SPOT to Catch Some of these Fish?

For your best chance at one of these fish, choose almost any of Florida’s large natural lakes. They seem to be in all of them. I have also caught them in canals around Miami.

In addition to the St. John’s River, here are some lakes to start with

WHEN is the Best Time to Fish?

Literally anytime. The fish are ravenous eaters will take easy bait like chicken hearts, chicken meat, and I’ve even caught them on cut squid.

See it here > Best 7 foot Inshore Rod for Pacus, Redfish, Snook, and many other fish.

If you have a rod you like – treat yourself to this Penn Battle II 2500 Reel and make it last a lifetime:

Four to 8 lb test is plenty for the smaller Pacus. Though I rarely broke the line off, it was because my lures were long and the fish couldn’t reach the line to chew through it once hooked.

A very thin wire leader would be perfect for this fish – which doesn’t seem to care what is moving through the water, it will eat it. Even bare hooks, I think I mentioned already. I noticed that if I bring them in very quickly (reeling quickly) they don’t have time to bite through the mono line.

Don’t use hooks and bait, just use any small lure. Smaller the better. Half-inch long is perfect. Go a little bigger to get bigger ones.

The smaller the lure, the better. Though they have strong teeth, they seem to prefer smaller bait. Use lures less than 2-inches long.

1.) Don’t Worry about a Rig. Just stick anything on the end of your line and pull it through a canal or lake with these fish. Use tied flies with one split-shot sinker about 2 feet up the line to get it down under, they’re about the perfect size.

There are no catch limits on size or numbers of these fish caught in Florida waters since they’re an invasive species. In fact, the state would love to be able to get rid of them, but they’re here to stay at this point.

Interestingly, I found an article from 1990 in which some biologists were surprised to find some Pacu in the St. John’s River. Read it here.

The reality today is that the fish has spread considerably. I’ve been catching them in the canals on the way to Miami since 1992. The canals were FULL OF THEM then. Today they’ve surely spread further inland and invaded some of the major lakes in the state.

Some people keep the fish in an aquarium. This is not a good idea. They can grow to 3 feet long and 50 pounds, first of all. Not many people can afford 3,000-gallon aquariums.

Secondly, they live for 20-30 years. These fish can outlive YOU. Thirdly, as if that wasn’t enough, you can’t keep any other fish with it because it will probably kill them. It needs its OWN 3,000-gallon tank.

Pacu are primarily vegetarian consumers but as I’ve mentioned above, they will eat anything that looks alive and small that you can drag through the water. In captivity, you can feed them dried pellets or floating plant food sticks, along with plenty of fruit and vegetable pieces.

They’ll eat leafy greens like spinach, lettuce, and apples, banana, peach, grapes, courgette, peas, cabbage, and carrot. I’ve seen some people fish for them with rinds from coconuts. I much prefer the live-bait looking lures though.

Here’s a blurb from a guy who kept one and fed him a variety of food items.

drummerspenc 2 years ago I bought our Red Bellied Pacu, “Mowgli”, in 2004 and he was approximately a year old. Began in a 29 gallon, then a year later into a 75 gal standard, and 10 years ago into his 210 gallon home. The ave life expectancy of an RB Pacu is 23-25 years. Mowgli is adored nearly as much as our dog, by the family. For years he ate frozen broccoli until I became tiresome of the weir vents clogging. 5 years ago I switched him to frozen Italian cut green beans, which he totally LOVES, and they don’t clog filtration. My 8 and 11-year-old children love to find him worms in warm months and ask me to feed them to him, with such pride. He knows all of us, though we are all careful with no sudden movements around the tank as he spooks easily, bashes his face then does not eat for 4 days. For the past 9 years, he likes it when I occasionally stroke or pet him…..He really likes it! He comers up to the opening when he knows I am there and just stays while I run my fingers on both sides of his back. For the first few beans fed to him, he gently takes them from my fingers, though I am ALWAYS cautious doing it, since I know how easily he chomps nuts, as a treat. Often we meet face to face through the glass as I talk to him, and he’ll stay there until I move away. The first time he sees me walk into the room each day, he behaves as an excited dog, while moving up and down the glass until acknowledging him with a wave of my hand he can see. Being 51 years old and an aquarist since I was 6, I have NEVER seen a bond in a fish such to this extent! He truly is something rare, and we will all miss him when he lives out his life.

Though it is farmed in South America as a vital protein resource, there is very little meat on the small ones that you’re likely to catch in the canals and the fish is so hard, so bony, you probably won’t get more than a mouthful of meat for each small fish.

If you catch the larger fish, you can give it a try. I can’t find anything about people eating them though.

TIP – in residential and agricultural areas, the pesticides from the fields leak into the canals and are concentrated. When you eat Pacu, or any fish, from Florida canals, you’re risking ingesting dangerously high amounts of pesticides. It’s just not worth it!

Credits appear below images. Some images are simply product images from the manufacturer.