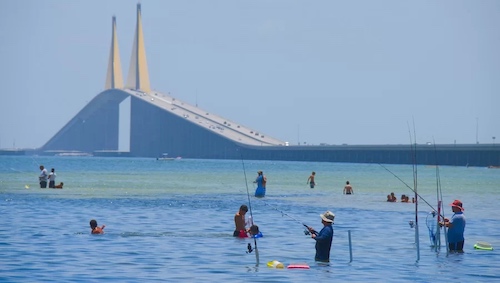 Wade-Fishing Guide (Fishing in the Water)

How to Wade-Fish? What is it? Wade-fishing means walking out into the water (wading) and fishing with your feet wet. I usually fish around waist deep to chest deep because I’m trying to reach Speckled Trout on the grass beds in Fort Desoto.

There are some tricks to it that I’ll mention here to help you have a good experience. At least a better experience wade-fishing than my Girlfriend Had! You can catch many other fish while wade fishing, don’t think it is limited to trout!

While wade-fishing I was almost always targeting Specks (speckled trout). They have some of the softest texture flesh of any ocean fish and I enjoyed it in my soup, or even with just some butter and black pepper.

Speckled trout are not very difficult to catch, and you can catch them in the 18 inch range all day in many places on Florida’s Gulf Coast.

While standing in the water fishing I almost always freeline a shrimp on a 1/0 or 2/0 Mustad hook using whatever line happens to be on the reel. Monofilament is better as it is less noticeable.

Speckled trout don’t have sharp teeth or gill plates, so mono line under 10 lbs. works great for most trout which are just a couple of pounds.

I probably wade-fished over a hundred times on Florida’s Gulf Coast. I loved being in the water, it was always cooler than the air, and I enjoyed seeing fish and crabs and wondering what was nibbling on my toes. I usually wore Nike sports sandals, so my toes were exposed on the top. Pinfish and crabs were toe nibblers for whatever reason.

Stingrays conceal their body under the sand and dirt and will stay there until they are stepped on sometimes.I recommend wearing at least some running shoes or other shoe with a hard sole that would be difficult for a stingray barb to pierce.

You can avoid most stingray tails by shuffling your feet as you walk out in the water to your spot.

The one time I was cut open by a stingray barb was right beside the Clearwater Pier in St. Petersburg. The sun was setting and it was a great time to fish. I walked out slowly in my bare feet, cautious of stingrays, and STILL one got me because he didn’t move as I shuffled my feet toward it.

The pain was eye-opening. I don’t recommend it. EVER. Imagine a blow-torch being held to your foot for two hours or so, without even the slightest break in the pain. That’s what it felt like. Mind-wrecking pain. Wear strong soled shoes for your own sake.

I was stung by a box jellyfish on the island of Maui in Hawaii. The pain of that vs. the stingray barb with venom, was about the same.

Now, the jellyfish sting covered about a 7-inch long and wide patch of skin on the inside of my thigh – not near the groin, so there are few nerve endings there. The stingray barb in my foot where there are lots of nerve endings was just as bad. Avoid both!

Is Wade Fishing Dangerous? Read about how I almost KILLED MY GIRLFRIEND while wade-fishing in Florida >

How to go about outfitting yourself to wade-fish using live bait?

Shrimp Bucket. I almost always have a bucket full of shrimp in this bucket when I’m wade-fishing because I told you, I’m fishing for Speckled Trout almost every time I climb in the water, but occasionally I’m looking for Snook and I’ll have pinfish too.

Your shrimp needs to go in a shrimp bucket. Get one with a handle because you’ll need to put a rope through it and attached it to your belt buckle, or something on your body or fishing vest to keep it from drifting away as you fish.

Get one with a bunch of holes on the top so the water can come in and out of the top and you won’t need an aerator. I’ve carried a battery-operated aeration machine into the water while wade-fishing and it’s no fun wondering when you’re going to dunk it and destroy the thing. I’ve lost a couple this way.

Same deal, many holes on top so the water can come in and out of it and keep the fish supplied with enough oxygen.

Now you may have 2 buckets in the water attached to you.

Your cast net will pay for itself over and over for years. Assuming it lasts for years. Get a small one (6-7 feet) and learn how to throw it in your yard on grass before you hit the shallows. Rinse it after every use and you’ll get more life out of it.

I think the sun is the worst degrader of mono in the nets, not the saltwater, so make sure you give it at least a good rinse, and store it out of the sun when not in use.

Fishing Vest. There are half-vests that are an attempt to keep the vest out of the water, but that never worked for me so I just bought the full vest and get everything wet that is from my nipples and lower. Sure you have to rinse it all off later, but that’s what a hose is for.

Pack your fishing vest with a couple of plastic trays of artificial lures like DOA Shrimp of different colors, but at least have clear, glow, and rootbeer colors.

Fanny Pack. I loop a good-sized fanny pack around my neck to hold my wallet, money, keys, and other stuff.

Artificial Bait (Lures). I always have a few DOA CAL’s (a soft white plastic shad) with a red jig-head (1/8 ounce), DOA Shrimp and at least a couple of DOA Crabs in dark brown and clear as well for any redfish that may be lurking around.

No matter what kind of fishing I’m doing, from Shore, a Boat, a Kayak, Onshore, or whatever,

I also ALWAYS have a few GOTCHA Lures on me.

Why? Jacks! Jacks or something else that is devouring a mass of baitfish. The gotcha lures are so bright and shiny, they get bites when there’s a bait slaughter going on and you drop one right in the middle and don’t pull it too fast.

I’ve caught Bluefish, Jacks, Permit, and Flounder on those lures often, so they’re good to bring along.

Best Rod and Reel for Wading in the Water While You Fish?

Which rod and reel and line you have depends which fish you’re targeting. More than likely you’re going to be after Speckled Trout. If so, use a n 8 lb. monofilament line because it stretches and will give the trout less stress.

Trout have weak jaws and mouths, and anything anglers can do to lessen the damage, the better chance the fish will survive when released because it’s too small.

Get a 7-8 foot long rod with medium action. I usually just use 7 foot UGLY STIKS with medium-action for all my Inshore Fishing. That means it isn’t too flexible and it isn’t too stiff. It’s medium and can handle medium-sized fish like Trout, Flounder, Red Drum, Black Drum, and others.

Reel choice is up to you. I think you could catch a legal size Speckled Trout on a toy Zebco rod that your seven year old uses if you really wanted to.

These are not powerful fish. However, you never really know what you’re going to connect with while wade-fishing, so you might have a doormat flounder or a Redfish on the line.

It’s ALWAYS best to get a reel with a good drag system, and one you can cast very accurately. I always go with Penn Baitcasting Reels. I hope you do too.

The accuracy and the feeling of solidness is unbeatable. Once you get accustomed to using the baitcasters, you’ll prefer them evermore. Really. Try it and practice and get great at casting. There’s nothing more accurate.

What to Wear While Standing in the Water?

Where to Put the Stringer While Wade-Fishing?

This can be a problem, unless you want to walk out of the water and put your fish in a cooler every time you catch one. I’ve used buckets before, but having 3 buckets attached to you is something like a circus act, and it’s not so fun.

I’ve also put the stringer around a loop in my belt, and as I mentioned above, on my girlfriend’s neck with the fish in the water at my feet, but that isn’t the best place for it. No, not at all. Don’t do that one.

A bucket you can seal is best, unless you are not far offshore. I’m typically just far enough – 50 yards out or so – which makes it a pain to keep walking back to the cooler on the beach.

I would almost say ANYWHERE, but that’s not entirely true. Go wade-fishing anywhere the water is shallow for a while and then drops off into deeper channels.

Go wade-fishing near piers and boat docks, unless someone is on them. Go wade fishing in the mangroves.

Wade-fish to get off the beach and away from trees or brush. Wade-fishing when it’s hot is the best because you’ll cool off quick.

Keep in mind, hypothermia during the cooler months is a real possibility and you should get out when you feel cold. Don’t stand there shivering for an hour before you make the decision to go get warm!

During long days on the water Kayak Fishing, I’ll often get out and wade-fish for a while to give my body a rest from being cramped up in the boat. You can tie a rope to your yak and tow it around with you as you walk.

Wade Fishing Is Not Social

You’re not likely to meet anyone wade-fishing unless you’re in a popular spot. While wade-fishing, you won’t be talking too much to anyone because you don’t want to spook the fish, or give away how you’re catching fish from under their noses.

If you’re looking for a social event, go Pier Fishing. It’s a blast, you can stay dry, and you only have to worry about bird crap in your hair, not a stingray ripping your foot or leg open.

My Favorite Place to Go?

My favorite place to climb in the water is down at Fort De Soto Park near the southern tip of St. Petersburg before the Sunshine Skyway Bridge. The water can be crystal clear. The Speckled Trout are plentiful. The entire park is so beautiful, it’s a joy just to be experiencing the place. They also have a great Fishing Pier and easy places to launch a Kayak.