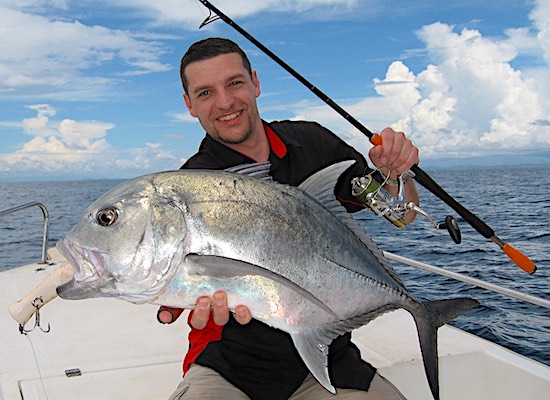 This site is about Florida’s amazing saltwater fish. I (Vern) spent 11 years shore-fishing, pier-fishing, wade-fishing, boat fishing, and dream-fishing the incredible waters around Tampa, St. Petersburg, Ft. Desoto, Miami, the Florida Keys, Bradenton, Sarasota, Melbourne, Sebastien Inlet… and the memories I have are incredible! Hoping for another decade or three of the same. Enjoy these profiles of Florida’s spectacular gamefish. Click one of the links below for huge volumes of information about some of the best gamefish on the planet.

Very strong fighters! Part of the Jack family. These are very strong fish that are typically in the 40 lb. range. and that’s the low-end of their range for adults! Juveniles are also great fun and may be found in shallower water less than 40 feet. The Greater Amberjack has a distribution from the eastern US seaboard down to all coasts of Florida, around to the Gulf of Mexico, and into South America and even Africa, India, Thailand, and Australia. This extended distribution means there won’t be any shortage of this excellent gamefish in the near future. 40 – 176 lbs. in 60 to 240 feet of water. All info about them here – Amberjack!

In Tampa, I’d go stand on the dock in back of our apartment and toss out shrimp on a hook across the canal to the neighbor’s wooden dock. There were often times big black drum just waiting for me to get off work. Good fighters, and delicious. Don’t eat the big ones, they typically have a large number of worms. Eat the younger ones within the limit and you’ll thank me someday. Easy to catch, fun to catch, and great eating. All three boxes checked.

My Uncle John, aka FISHRAT Keryeski, encouraged me to join him at Sebastian Inlet on the East Coast of Florida for some Blues fishing. Now, we don’t have many blues in Tampa – if any. I’ve never caught any. I wasn’t too keen on it after learning they’re only an average of a foot long or so. He said it was a blast. I relented and joined him. It was pier fishing at its finest. Blues are super aggressive when feeding and there’s blood in the water as they make chopped meat out of anything in the area when they’re in a frenzy. Fish for Bluefish if you get a chance. You can’t NOT hook one. We caught dozens in a couple of hours until they moved out of range of our 50-meter casts with huge rods – bring a BIG rod.

I’ve probably bent more hooks and lost more fish to cobia than any other fish. In the flats around the bridges in St. Petersburg, Florida, the Cobia go 20-30 lbs easy and can bend the strongest metal hooks. I’ve yet to try it, but next time I target this Cobia species, I’m going to tie on DOUBLE hooks. That’ll teach ’em. I hope!

Super fun Florida fish, that are like road-runner in the cartoon. Dorado sprint off when hooked and sometimes break the surface. They have a burst of energy that is unreal to the new angler for this fish. The real fun of catching these dolphins is how they taste in a Mahi-mahi sandwich. Mouthwatering excellence. I found these often at the Gandy Bridge (closed fishing pier) in Tampa, Florida at night. They blaze through the water, creating fluorescence. Super cool target species.

Like tiny permit, or like Silver Dollar fish you used to keep in your aquarium when you were young. Or old. Pompano also have an amazing taste and are highly sought after, especially on Florida’s East Coast. Sand fleas are the main bait. I remember the first time I ate pompano. I caught a few near West Palm Beach and threw them on a grill at the beach. The taste was mindblowing. You’ll love it too, I’m sure of it.

Speckled Trout have very soft flesh, that when cooked right (broiled) in the oven, can produce exceptional cuisine. I usually throw some curry powder in with mine for the flavor, and I can eat 3 whole trout in a sitting. Gator Trout are the big ones and they are not plentiful, but a worthy target. You’ll know you have one when you see the two oversized fangs in the top of the jaw and it is over 19-inches.

Grouper are deep-water fish with a lot of meat. Their flesh is almost other-worldly delicious. If you’ve never had a blackened grouper sandwich, and you’re in Florida right now and near a beach, head straight to the nearest seafood restaurant on the sand and order one up. You’ll love it. The flesh flakes away in chunks. Really a special experience. Grouper are also difficult to catch because they are VERY strong fighers and try to wrap you around structure immediately – and often succeed!

Dragging shrimp across the bottom is inevitably going to give you either flounder or pinfish. Well, both. Flounder are really nice eating fish, so it’s worth all the shrimp you’ll lose to the pinfish. Usually. Sometimes. 😛

When you see the water suddenly explode around you in a feeding frenzy, you can be sure it’s JACKS. Crevalle Jacks are vicious eaters. They corral bait into a small area and have an all-you-can-eat smash-and-grab buffet. Very strong fighting fish, but not great eating. Still, I’ve had them and the white meat is not bad at all!

Permit are like huge pompano, and they taste great, but they’re better known as hard fighters. They are like massive jacks – very strong and great fighting fish. Permit have great sight and hearing, so they can be difficult to catch. Smaller permit are great eating, and all serious Florida anglers eventually try to land a few! A common size is around 20 lbs.

I drove down to Miami often from Tampa and Clearwater. One time, I had to relieve myself. I stopped by a canal and took care of business. Then I saw some fish in the overgrown canal. I grabbed my ever-present rod and lures from the trunk and threw some in the canal, dragging the very small lures slowly. BAM! Fish on. This happened continually for 40 minutes as every cast produced a fish.

You can use red worms, nightcrawlers, any kind of worms to catch them.

Whether these were red-bellied Pacu that are supposed to prefer “Seeds” and other vegetarian items, or these were red-bellied piranhas, I’m not sure. The teeth were very sharp like Piranha, but not as triangular. I’m sure they were Pacu. This started my fascination with the species and why I’m including it in my saltwater fishing website – when it is primarily a freshwater fish! Anyway, great fighting fish and a joy to catch as many as you can for hours on end.

Another fantastic eating fish is the Redfish (Red Drum). We’ve probably eaten more reds than any other Florida fish because they’re plentiful and so delicious. Target Redfish as your main, or high-priority focus while in Florida.

Early on when I was focused on catching Redfish and Snook, I wondered why some people were sitting on the piers and on bridges dropping crab, shells, shrimp down the pylons. I figured they were going for snapper of some sort. Nope. Sheepshead is the best-eating fish I’ve ever tasted, with the exception of Wahoo. It’s impossible to call one better than the other. Sheepshead are definitely worth your time! Some people specialize in this soft-fleshed fish. Try it while you’re in Florida, and thank us later.

You may catch snapper by accident, but once you catch a couple and cook them for dinner, you’re going to absolutely love them and target them in the future. Snapper have many subspecies and characteristics. Some snapper like the red snapper grow to be very large and are amazing dinner fare. Others are small and hard to find at some depth, but still delicious.

Snook are powerful saltwater fish dwelling under and around docks and boats in residential canals and in the shallows. When the water gets cold, you can find them bunched up by the hundreds in some sections of canals. If netting snook were legal, you could take home a truckload. Some poachers do exactly that. Snook are some of the most fun to catch Florida fish that we have. Take care of the stocks and we’ll enjoy this resource for decades to come!

Like silver-torpedos launching into the air above the surface of the saltwater around Florida, these are some of the best fighting fish you’ll ever have the pleasure of catching. Weighing as much as a full-grown man, and there’s always the possibility of one flying into someone on the boat and knocking them off. No kidding. Tarpon are acrobatic and fierce… and horrible eating. Great to catch, but let them go as fast as possible, you’re aren’t man enough to eat this fish!

Tripletail are not so easy to target, but if you’re a die-hard Florida angler, you’re going to want to put in the time to find and land some of these saltwater fish. Tripletail has some of the best tasting flesh of any fish anywhere on the planet. Some like it as much as or even better than snapper or grouper!

A massive fish that gets over 1,000 lbs. and is very fast in the water. They are found in thousands of feet of water, but they do hit big topwater plugs and streamers towed from catamarans and yachts. Sailfish and marlin are packed with dangerous levels of mercury, and are caught mainly for their unbelievably difficult fighting ability.

Sometimes over 1,000 lbs. in weight and more than 10 feet long, marlin get huge. These are very fast fish which can swim between 60 and 80 mph! Needless to say, you’re probably not going to catch one without the right gear! Deep sea fishing rigs, trolling rigs, are best.

Delicious huge mackerel that can rip a hundred yards of line off your reel in a few seconds, then do it again when they’ve recovered. These are super fast fish that are great tasting and a blast to catch on rod and reel. King Macks have a high mercury content so you should limit your intake. Mercury levels very high, but not as high as swordfish or shark. Higher than big-eyed tuna though, which is HIGH.

Spanish Macks are beautiful fish, like small king mackerels with spots and sometimes really beautiful colors. The meat rather strong tasting, there is a bloodline which taints the meat and people don’t generally like it when there are so many other great-tasting fish to target in Florida. Spanish Mackerel are plentiful and fun to catch. You should probably target them and see what you’re missing. If you dare, take one home and cook it up. Let me know what you think. I didn’t mind them too much, but then I like Jack Crevalle too!

Best eating fish in the WORLD as far as I’m concerned. I was living on Oahu, Hawaii for a few years and I went to Kauai with my ‘then’ fiance. I had Wahoo in Walnut sauce at this incredible restaurant overlooking the beach. I died that night. Best fish I’ve ever eaten. I went back a number of times to make sure. I’m sure. Get some if you can, and let me know in the comments what you thought.

High in mercury content, yellowfin tuna should be avoided. Now, tell that to everyone who eats Ahi Poke in the Hawaiian Islands. Personally, I’ve eaten this little appetizer a couple hundred times in the six years I lived in Hawaii. I don’t think I suffered any ill-effects, but who knows? You have to try it if you get the chance. Yellowfin are deepwater fish with a great fight. Very worth targeting while deep-sea fishing.